The Witcher is just one of those games that I have heard of but more-or-less ignored and never bothered playing up until this point. I really don’t know why that is, given my massive soft spot for any fantasy RPG. I suspect that the named had originally turned it off; I must have figured that it was a dumb game about witches or something. Anyways, I was wrong: The Witcher is an absolutely gripping, though flawed dark fantasy action RPG.  Despite interface and gameplay flaws that were quite frankly, more than a little irritating, I really really enjoyed this game and played it at an almost obsessive level (sorry for vanishing off of the internet guildies, real-life friends, etc lol).

The Witcher is based off of a popular Polish book series of the same name by Andrzej Sapkowski. Atmospherically, I think that one of the elements that sets The Witcher aside from most other fantasy games is that it is not set in a stereotypical happy cheerful fantasy world. The game world is a wonderfully detailed land riddled with despair, plague, religious fanaticism and bleakness. It is actually a more contemporary story than you would expect from a fantasy game, which gives it a little bit more of a unique flavor. At heart, it is very much a tale about racism, greed, terrorism and gray shades of morality instead of the standard heroic deeds and good vs evil fantasy fair. 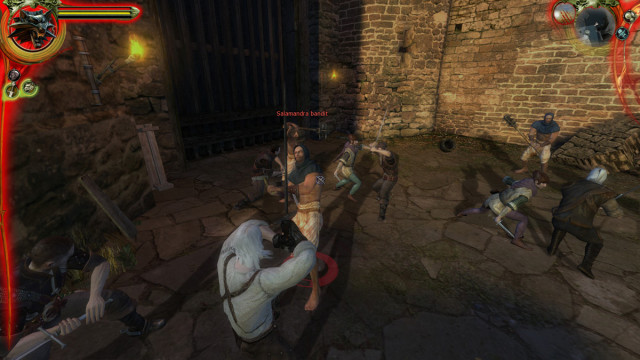 It reminds of me the Dragon Age and Song of Ice and Fire series in that respect: Dark fantasy with threaded with political and social conflict. Also, like Dragon Age and most other BioWare games, story progression in The Witcher is based off of a choice and morality system. Most of the time, choosing which path isn’t a matter of saint, neutral or asshole. There’s no visible karma system and the weight of your decisions isn’t immediately apparent, giving the game a more realistic feel (versus quicksaving and repeatedly reloading after seeing the results of every single conversation). The game’s dialogue is generally well written though peppered with cheesy quips and some points of not so great translation. Voice acting though, seems to be inconsistent.

I really enjoyed how alive Vizima felt. Citizens walk the streets, mingle with each other and go about their daily routines. But even so, there’s a surprisingly limited number of NPC models available in the game, even among many plot relevant named characters. Literally every single merchant and old man looks exactly the same as every other merchant and old man, which broke immersion and was a little confusing to say the least.

This is a tedious game, so much running back and forth; which would not be as bad if there weren’t so many loading screens. At one point, a quest had Geralt shuttling between a location out in a field and a ma in and Inn: Exit inn, load screen, exit zone, load screen, run through field, get sent back to an even further zone or back to the inn, repeat. Painfully tedious.

The interface is pretty awkward and to top it off, not all of the interface elements are accessible in some of the camera views. For example, I would usually play in F3 (controls are similar to an FPS). In order to find out how much time I had left on a potion, I would have to toggle to the F2 view, mouse over the potion, then toggle back. There’s also no Journal hotkey, which was annoying since it was used so much to track various quests. The inventory system is fairly clunky and micromanage heavy. So all of this in combination with the many many loading screens made The Witcher even more of a tedious experience. It’s not too bad of a game mechanically though. I found myself liking the combat system a lot more once I got used to it. It’s actually pretty fun, though the combat timing bit feels a little stupid. I wish that combat operated a little bit more on the tactical side and less on the “randomly click on shit” side. 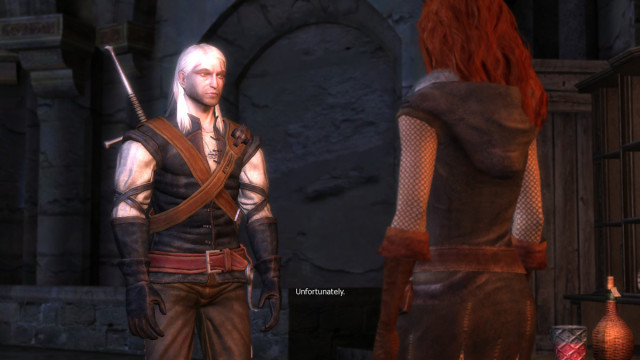 There are three aspects to the combat system: Melee, alchemy and signs. The signs are castable spells. Melee works as follows: You have two weapons: A silvers sword that is effective against monsters and a steel sword that is effective against humanoids. Each weapon has three difference attack stances: Fast, strong and group for different situations and enemy types. You attack with your mouse and can chain attacks by clicking when your cursor changes to a flaming sword icon. Switching between multiple weapons and multiple stances is cumbersome, but it works, even though at times it feels like an ultra dumbed down version of click DDR. I wonder if The Witcher would play better with a controller.

I really liked the alchemy system and wish that the toxicity effects as well as the ability to drink potions in combat carried through in The Witcher 2 (but that’s for another post). Basically, you can collect herbs and ingredients from various sources in the game. These ingredients in combination with recipes (bought or found) are used to brew potions which can be used both in and out of combat to heal, increase stats, see in the dark, etc. There were a couple of things that felt unbalanced: The Igni sign for example, at higher levels pretty much overpowered all but 2 enemies. It was also trivial to drink a crapton of potions, meditate your toxicity level away before a difficult encounter.  I am also glad that setting people on fire and then kiting them around repeatedly is still a staple of third person RPG combat. It never fails.

Despite the drawbacks, the fact that I fawned over this game at the exclusion of most other things as much as I did is a testament in itself to how much I enjoyed it. If a game bores me I’ll just set it down into my stack of half-finished games. I don’t though, really blame anyone for giving this game a low score. As mentioned above it is pretty tedious; The game’s pacing and overall flow could have been better to ay the least. If you can look past and tolerate The Witchers flaws, and there are quite a few, it’s well worth playing. It has a rich story, Geralt is a great character and the fights are reasonably fun.

PS: For a game with a surprisingly mature narrative, The Witcher has some awesomely perverted sex humor. I mean, what’s with all of the sex cards, lmao? Being a witcher apparently gets you more pussy than your local city cat shelter. Damn. It’s like Pokemon I guess, gotta catch ’em all?

PPS: Save a lot. This game has a tendency to crash every so often….