Hello, I am Keiya and this is my website. HDO stands for Hokage Dot Org, and this website is for the most part, a blog about video and other types of gaming; Though as of late, other hobbies and topics have started to bubble up to the surface. When I was in first grade, my sibling and I played Nintendo at a friend’s house and that Christmas, there was a Nintendo Entertainment System under the Christmas tree courtesy of Santa. Since then, gaming of all platforms and types, electronic or otherwise have been something that I have always enjoyed.

I am an adult female gamer with a professional and educational investment in technology, computers, and their respective industries. I have been a self-professed geek for as long as I can remember; I live on the sunny end of the US west coast with my husband, who is frequently referred to in my postings. Other than obvious computer related hobbies, I enjoy shooting things with a variety of precision instruments (archery, airsoft, actual firearms, photography, etc), running, hiking, birds, and coffee. I also greatly enjoy art and music. Mostly viewing and listening as my personal skills in both don’t seem to get used all that often (note to self: Pick up guitar again).

This Site
I have had a personal website since since the mid to late 90’s and a personal domain since November of 2000. This site began as a collection of personal blogs under various names, hosts, and content management systems chronicling every single interesting and uninteresting event that has ever occurred while I was in college. After a certain point (late November of 2004…) it pretty much became a World of Warcraft blog, and is now more-or-less about general video gaming as well whatever else I am interested in at the moment. Hokage.org was registered in 2002 after my original domain name had expired. This site went semi-perma dead at some point in 2005 out of general disinterest/reduced personal time and was resurrected in 2007 after nuking all but approximately, 2 entries from the database; And that is where we are now.

Yes, the domain name itself is Naruto related and no, I don’t actually like the name hokage.org all that much since this site really isn’t about Naruto. I had considered replacing it, but it has come to grow on me and seeing as how I have owned it for well over a decade, meh. Here is a visual history of this site. Also, if anyone cares, this site is hosted at Linode. Here is my Linode referral code. 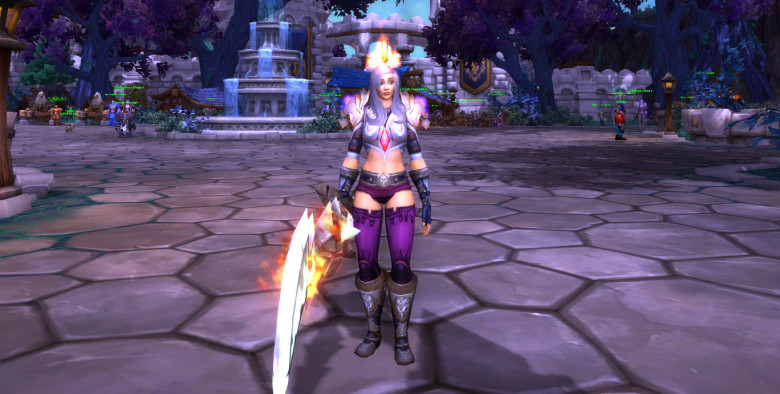 Since this site is effectively 50%+ WoW: I started playing World of Warcraft during the open beta in early November of 2004 with a group of college friends. I used to lead the guild/raids in a fairly hardcore environment back in the day but my husband and I have now settled into a casual play schedule.  jk we’re back for Legion lol :p

My main character and really, the only the character that I have ever played seriously is Keiya, a human retribution paladin. Every once in a while, Doombeard the hunter will come out to mine and/or craft things.

The name “Keiya”
Keiya is pronounced like “Leia” with a ‘K’. For some reason, absolutely everyone pronounces it like “Kaya” (as in Papaya) and they are all wrong. There is no personal significance to the name “Keiya” other than it, and other similar iterations, being the names that I generally use online. It’s actually of mash-up of “Kei” and “Kaya,” two names that I have used in pen and paper role-playing campaigns in the past.