Welcome! I have a mild obsession with Animal Crossing and thus feel the need to dedicate a small corner of my website towards this game. If you are here as a result of my SpotPass or otherwise, I would love to know. Please feel free to peruse or comment if you have any questions. Dream Address: 5400-3186-3246 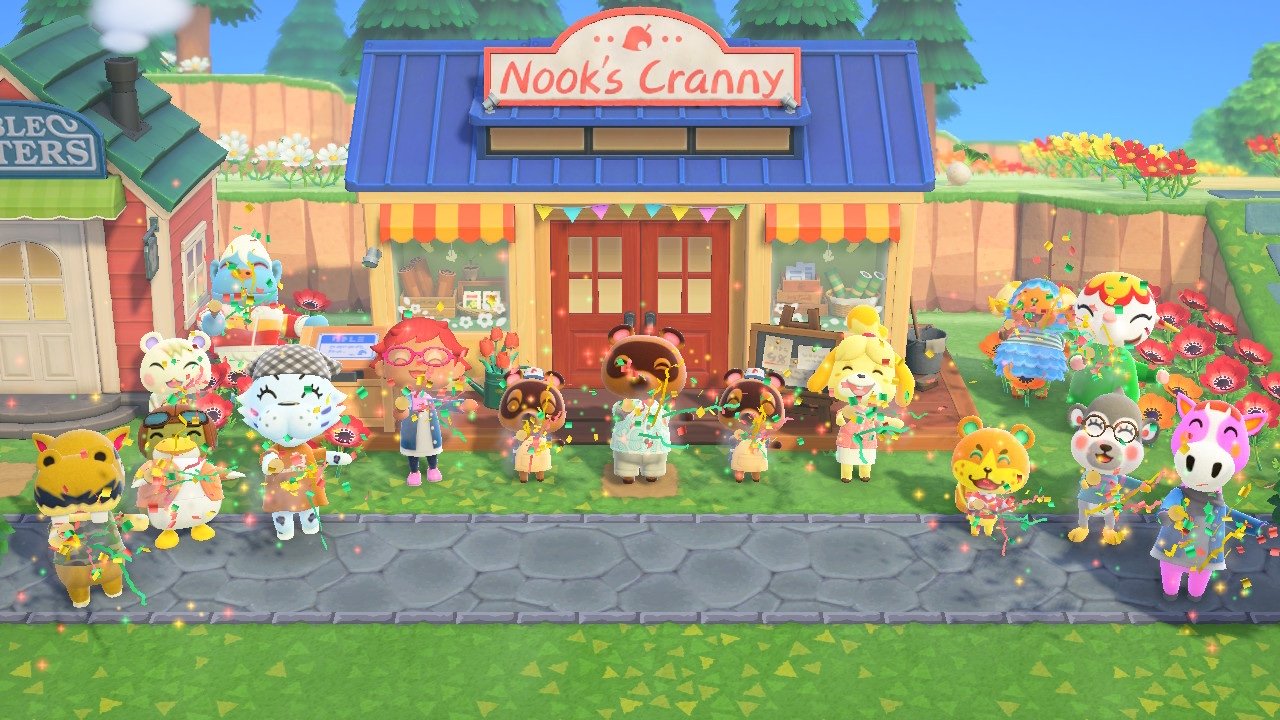 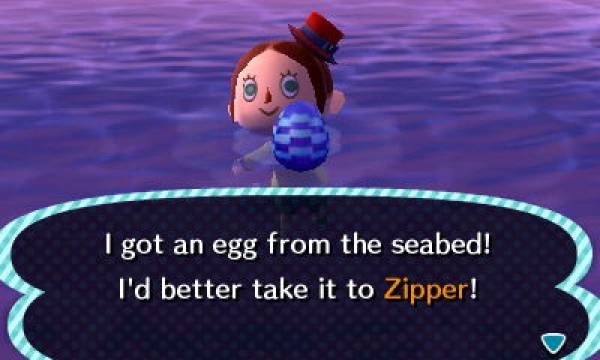 I have fallen out of habit of playing Animal Crossing daily for the sake of fawning over Diablo III: ROS when I have spare time. So the fallout of not having played ACNL for two weeks? Cherry moved out and there were a few weeks to pull, otherwise not a whole lot. Sadly, now that I have all pictures from all current Chulak residents thanks to April Fool’s Day, I really don’t care. (Cherry least of all, I wanted her to leave).

I did remember to turn on my 3DS for the Bunny Day event. The problem with the egg event was that you needed a wetsuit in order to obtain one of the six eggs which I did not have. Luckily the island had one on sale. Unluckily I had zero badges and the only tours that were available were the ones that I disliked the most. It took about 40 minutes or so to farm all 40 badges. Yay completionism.

I have had good luck breeding black roses this week; Quadrupling my black rose inventory even! Despite having used the fertilizer on my pear trees every day, I have still had no luck with growing a perfect pear. Don’t sell your perfect fruit kids (by default all towns have one perfect fruit)! If you do, you aren’t going to get it back for a while unless you are super lucky. 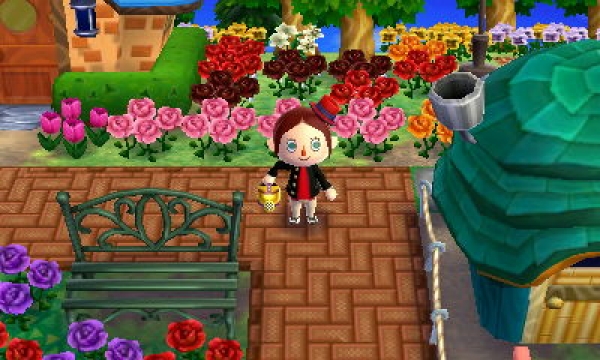 Puddles moved into town on Wednesday. We like puddles because she is cute and has for once, moved into a plot that does not interfere with any existing path or plant. On a similar note: Does anyone else have a villager that they kind of dislike but don’t want to move out because their house is located in literally the perfect spot? This is the way that I feel about Chester. 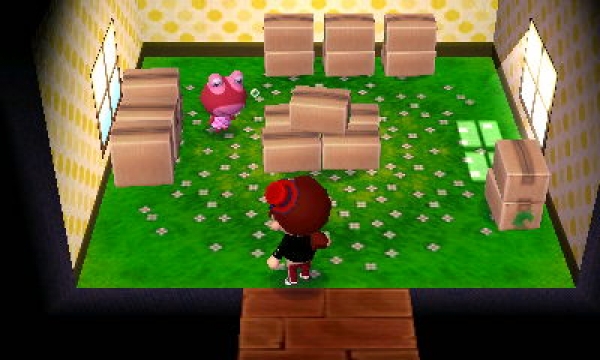 I do not however share the same feelings about Rowan, who’s house has destroyed the one and only apple tree in Chulak. I unfortunately did not realize that villagers could spawn so close to Re-Tail as well as another player’s house (immediately to the right). Oh well :/ 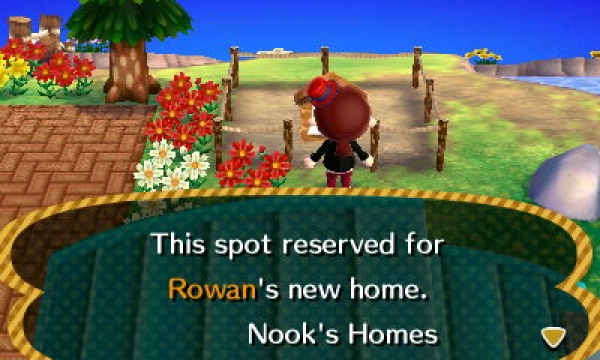 Huzzah for the snow finally being gone and not having a dejected looking town tree. I really wish that the ability to remove ground patterns was locked to each character. If only I was given a dollar for every instance in which I had kicked one of my paths off of the ground while picking up a piece of fruit or shuffling flowers around. 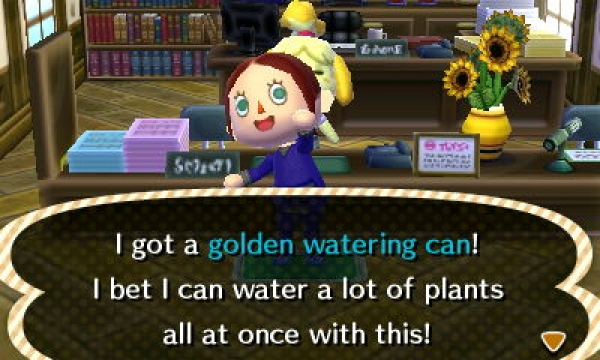 Gaston is my new favorite villager because he is the only one thus far who has chosen to wear my custom designs (yay the Wesley Crusher sweater). 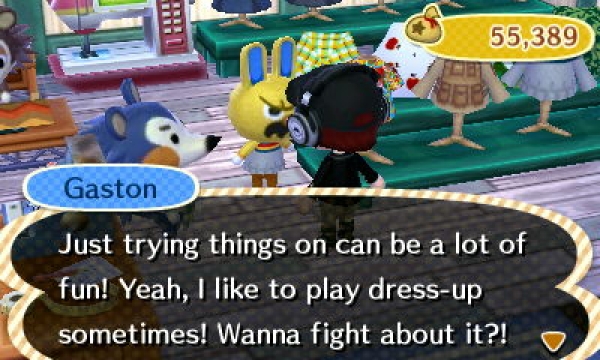 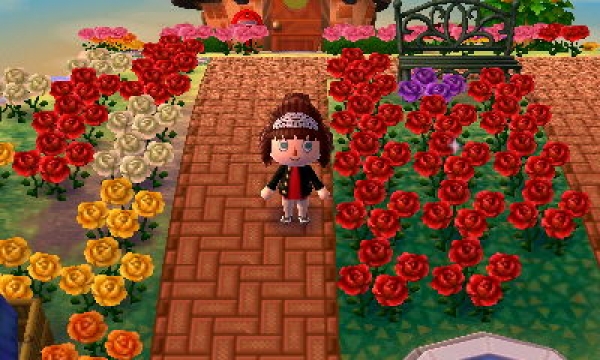 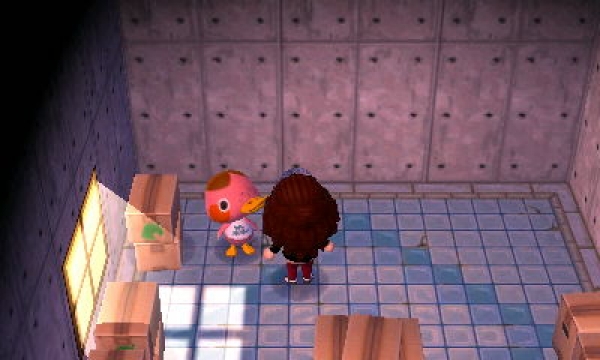 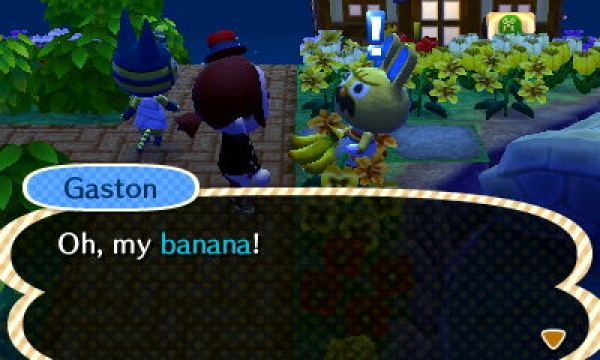 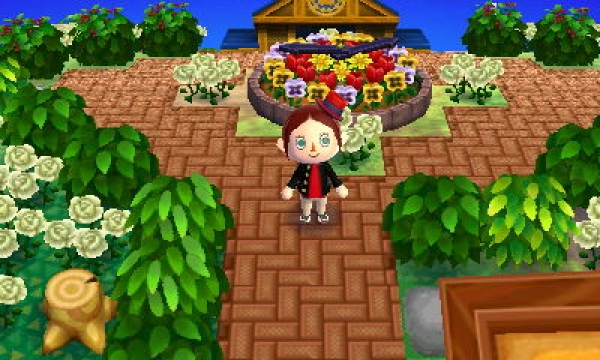 Sadly Ava, one of my favorite villagers moved this morning. I have been preoccupied with other activities and had not even noticed that she was moving :/. The vast majority of my PWPs have been unlocked by Ava. On the upside, I can finally fix the paths (her house was placed in the exact wrong place). 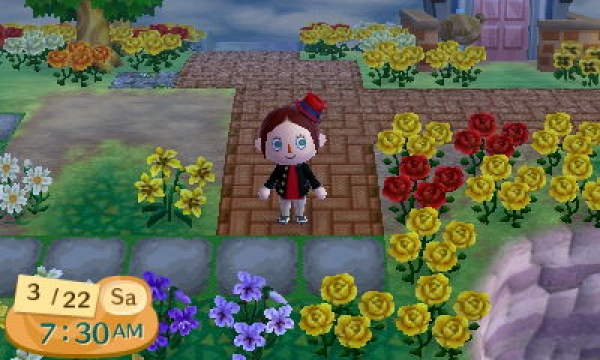 ACNL: Out With the Old and in With the New

Only one villager (Tutu) had moved out as a result of mostly neglecting Animal Crossing for a few weeks for Bravely Default and other activities. I guess that isn’t too bad, given that she mailed me her picture. Why can’t I seem to get any villager pics unless they move out? 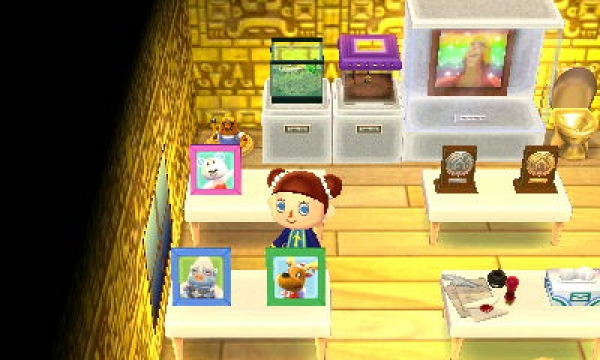 I was pleasantly surprised to see that Lucha had moved into town as he was on my dreamie list. 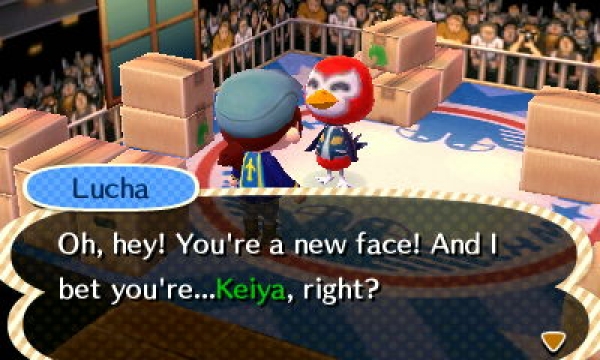 After speaking with Ankha last night for about 20 minutes straight, I finally got her to move into Chulak. She better be worth it since getting her to move in cost me about 20k and my Saturday night K.K. Slider boot (left it in my inventory, whoops). When campers agree to move in, is that guaranteed or is there a chance that they will bail out? About a month ago, Skye agreed to move in but never did. 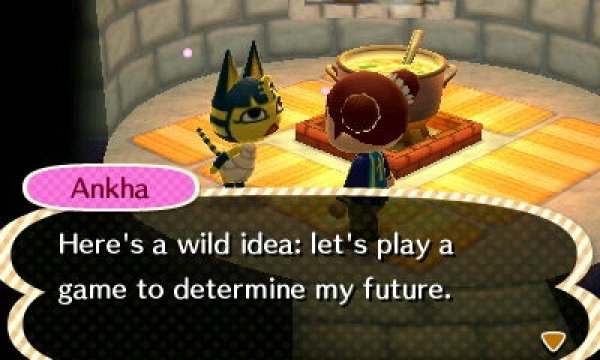 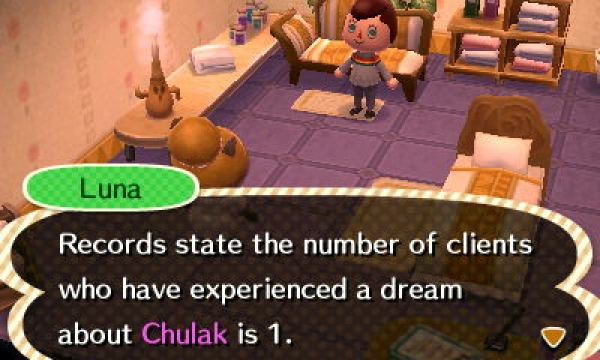 Want to make 300 bells in 15 to 20 minutes without using the stalk market or resorting to duping? Farm beetles on the island. The basic idea is that the island has a low creature spawn limit: As in, only about 4 to 5 bugs can be on the island at any time. You can increase the chance of an expensive bug spawning by decreasing the chance of a cheap but spawning. The expensive bugs only spawn on palm trees.

First off remove absolutely everything (trees, bushes, stumps and all) from the center grassy area. When you are finished, the grassy area should be bare. Next, remove the trees along the bottom of the island. These trees are way too close to the edge, making it difficult to sneak up to anything that spawns on them. This should leave you with a total of 8 palm trees, 4 per side. Now, you can do one of two things depending on your farming preference:

If you are still having trouble catching bugs, try digging a hole in front of each tree, as the optimal bug catching distance is exactly 1 space. However, keep in mind that any hole sthat you dig will reset eventually (after about a day?). Any bananas and shells that you move will remain. 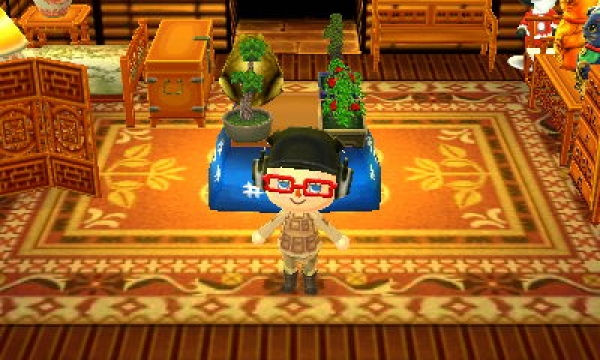 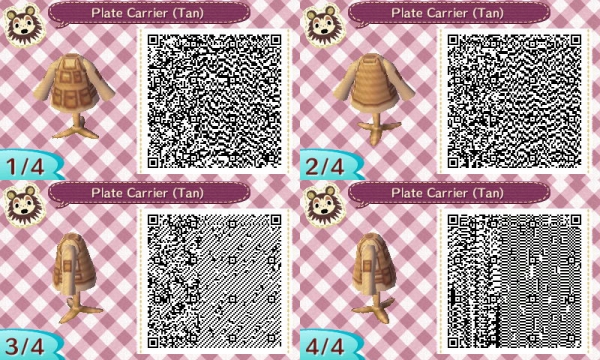 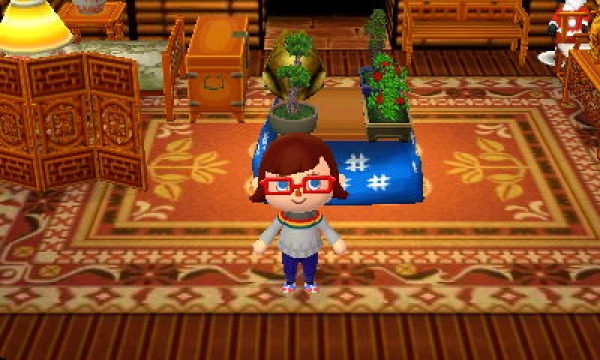 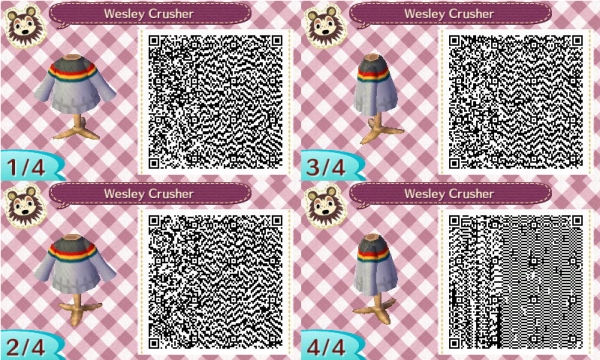 Toy Day and What Not (ACNL)

I am glad that there are other people in this world who have spreadsheets and odd notes devoted to Animal Crossing and the like. It’s worth noting for future reference that the gift hints do reset when a villager moves in.

Thus far, Jingle is the only picture that I have :/. Sadly even with all of the hints documented, I still had to reset the game one time in order to achieve a perfect match for each villager. Mixed up Chester and Cousteau’s gift, whoops. 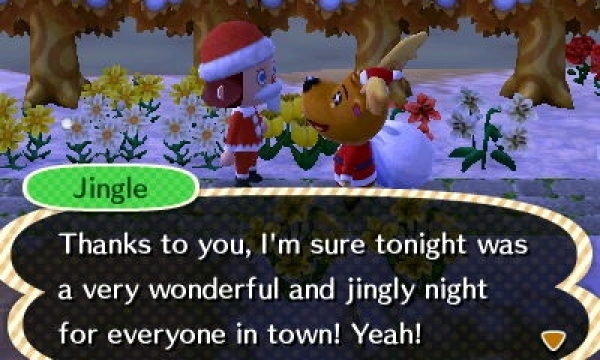 The frogs are pissed off at each other again (conflicting personalities, Prince is a lazy villager and Cousteau is a jock). I am pretty certain that Cousteau was dudebroing it up way too hard for Prince’s liking. We could also blame Hans… 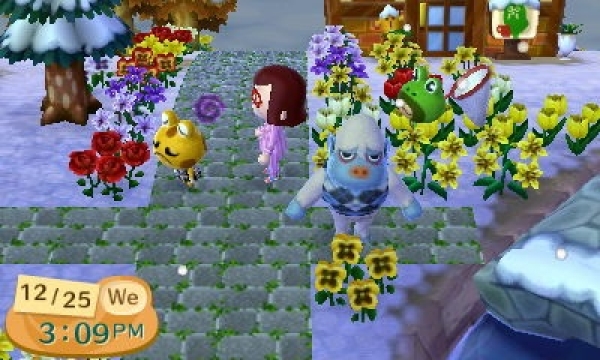 Good riddance Hans and your creepy-ass stare. Please don’t let the door hit you in the ass on the way out. 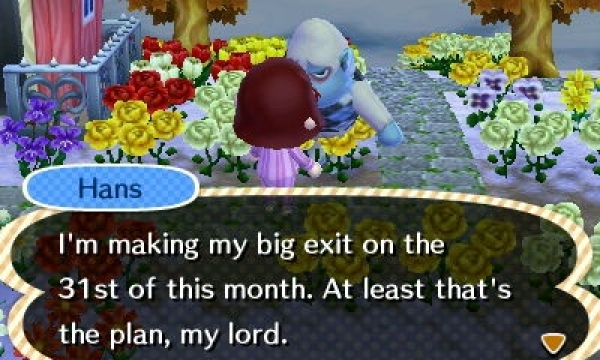 I am mildly obsessed with Animal Crossing New Leaf. Currently sitting at about 170.2k HHA points and working on expanding the rest of my house. The entry room contains the full exotic set as well as several other harmonious item sets. When I get around to building and expanding the right room on the first floor, I will probably turn it into a zen set + item set display room for the sake of decluttering the entry room 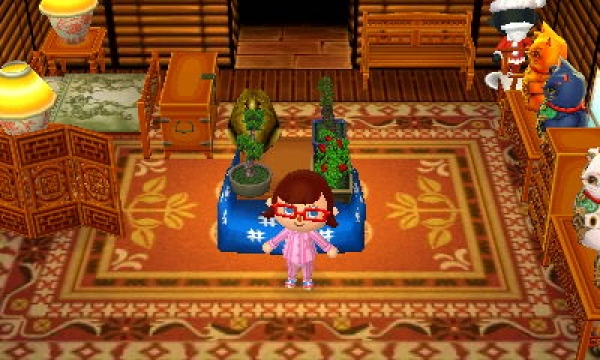 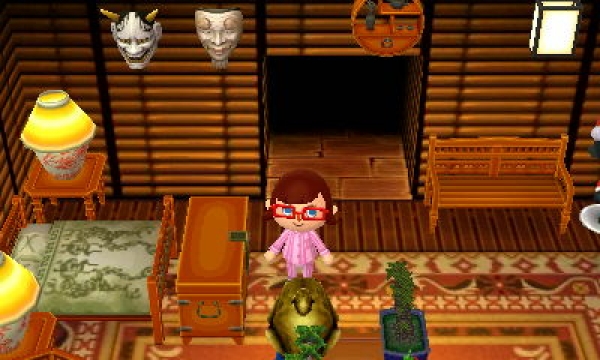 The second floor is reserved for seasonal furniture sets. I for the life of me cannot get the Ice Floor. So so so many snowflakes were gathered but alas, no dice 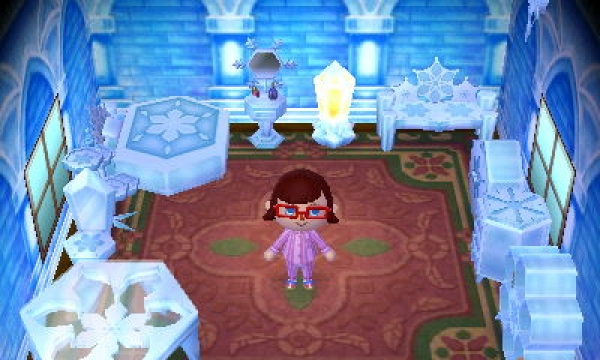 First floor left room with most of the modern wood set pieces. Haven’t quite decided what set I want to collect and display here yet. Actually, I love the cabana series but that’s a lot of medal farming… 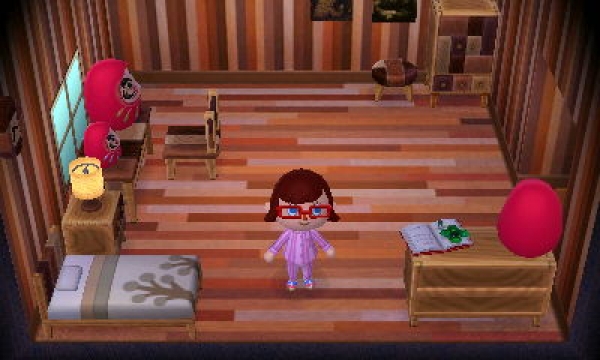 My trophy room is located in the back room of the first floor. It is obviously influenced by Covet of Latte, the Nintendo SpotPass home that appeared in October. I will most likely move the bugs, both of which are December lucky items upstairs with the rest of the seasonal items and replace them with cafe set pieces as I obtain them from Brewster. Sadly as of yet, none of my villagers have graced me with the honor of possessing their pictures, despite running numerous errands. Y U NO LIKE ME? /sad. 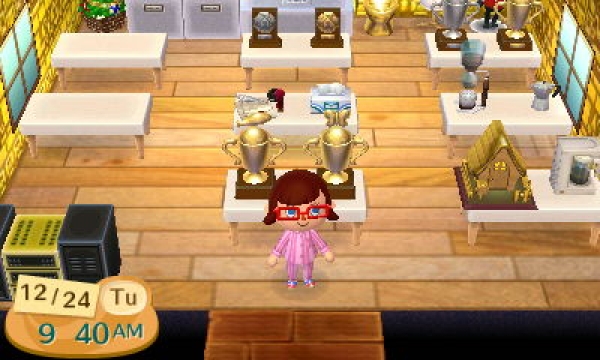 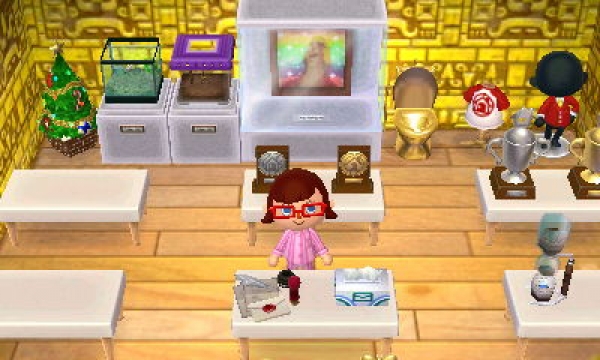