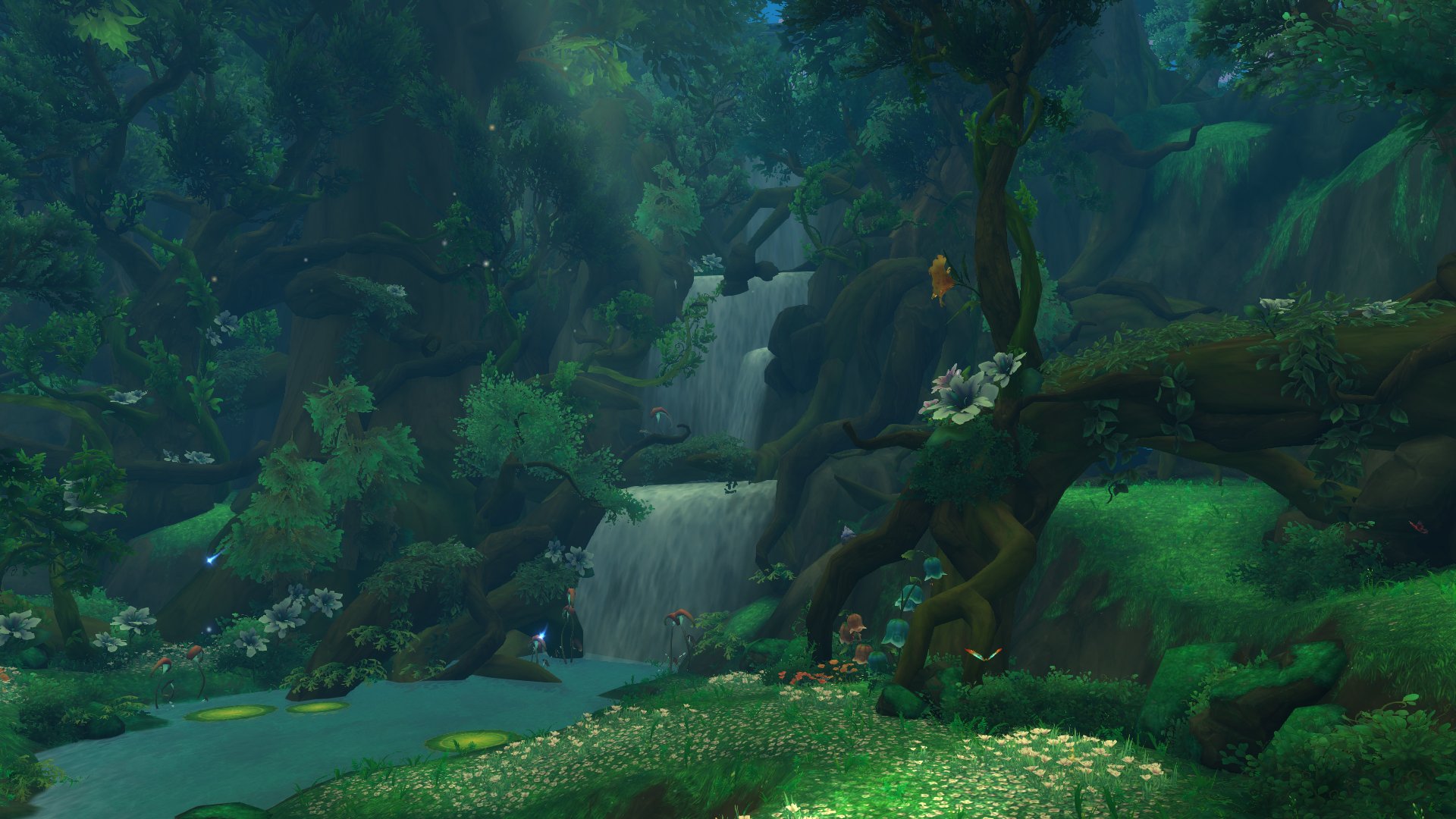 The topic of storytelling came up the other morning while my husband and I were discussing how much we were enjoying Legion so far. We had both decided that Legion may actually mark the first WoW expansion (at least since Wrath of the Lich King) in which story has been a primary motivator for content completion.

Each zone in the Broken Isles has its own distinct story to tell, all ultimately tying into the legion invasion (thankfully different stories with a different flavor, aka not all green fell shit). That element in itself isn’t unique to Legion, but I feel that this expansion pack is the first in which I am able to actually complete each zone before moving to the next one. There are two main reasons for this:

1. Level Scaling: In the previous expansion packs, each zone was designed for a specific level range. Since it was pretty easy to out level any particular area, the general flow of things was to half complete a zone, move onto the next one once all of the mobs and quests turn green, complete the questlines at max level when there isn’t anything else to do. Since Legion content scales with your level, there’s really no pressure to continuously zone hop.

2. Non-Prohibitive Gameplay: For example, not having to compete with other players in tagging mobs and not having to wait indefinitely for named quest mobs to spawn. Few things in a new expansion pack are more of a bonerkill than huge questing bottlenecks.

Maybe I just have a short expansion pack memory, but without spoiling anything, the quest lines seem more…personal this time around. I feel like there are a lot more character driven events and quests. So far, Blizzard has done a great job of communicating just how dire the invasion is. It certainly feels more ‘important’ than alternate dimension orc slaying. 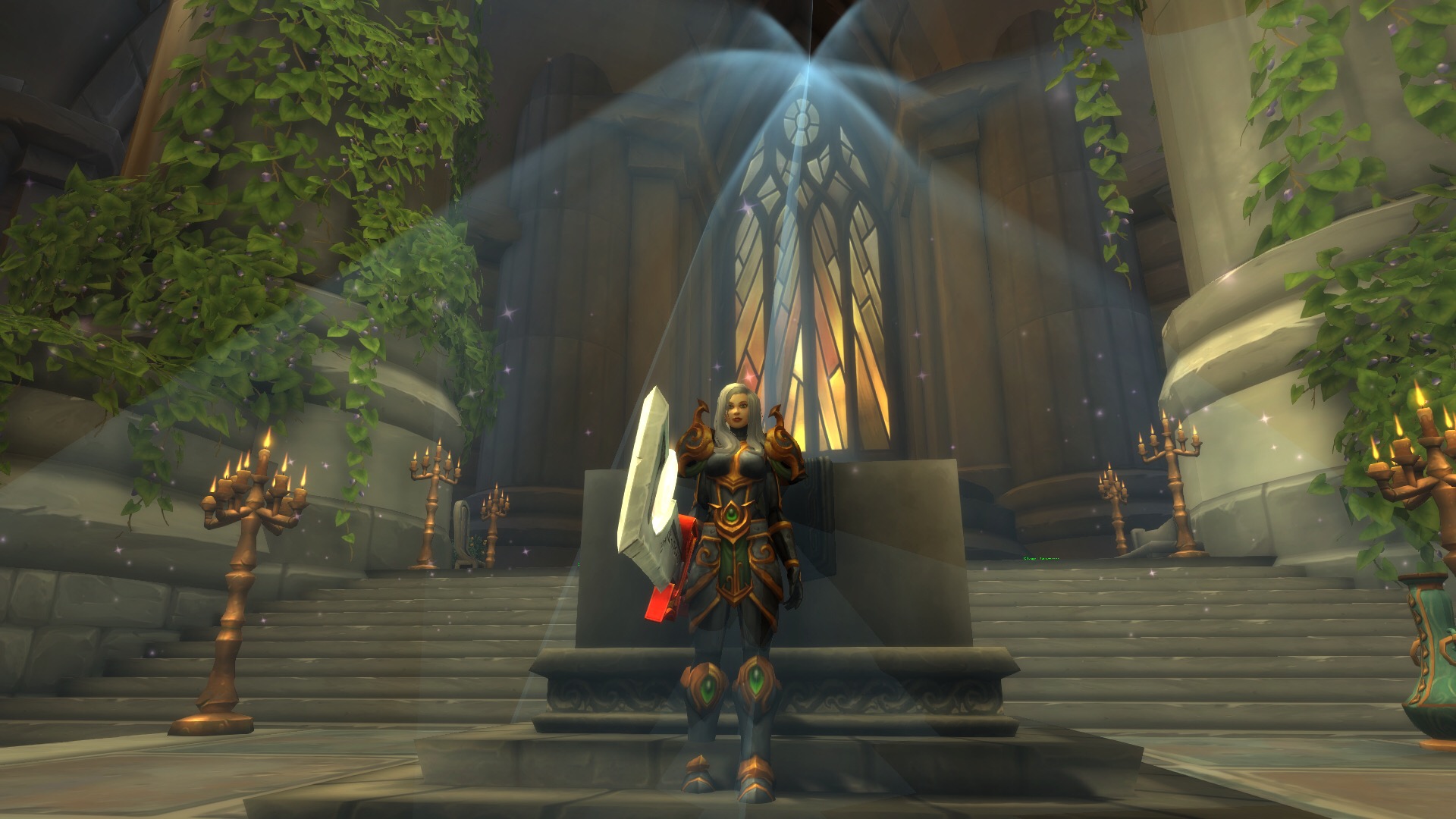 Sitting at work while everyone is having fun playing Legion kind of sucks but adults gotta adult I guess.

Thus far, no queue, no lag, no disconnects, no waiting to tag named mobs, or really any of the typical expansion release bullshit. Smoothest launch to date; Having 4 starting zones + level scaling = best idea ever. No more funneling half the server into one zone or feeling rushed to drop a quest chain in one area for the sake of moving onto a more level appropriate zone. Good on you Blizzard. 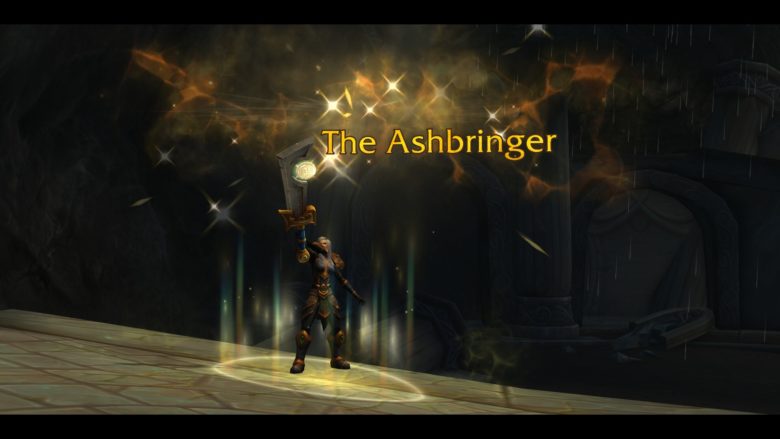 ….it’s still weird though not having any new talents.

There are three paladin artifact weapons, each corresponding to one of the three paladin specs. Everyone, or at least all true paladins of course know that there is realistically only one choice, and that choice ain’t no hammer or shield. So alas, after a decade and change of pining for it: The Ashbringer is mine. 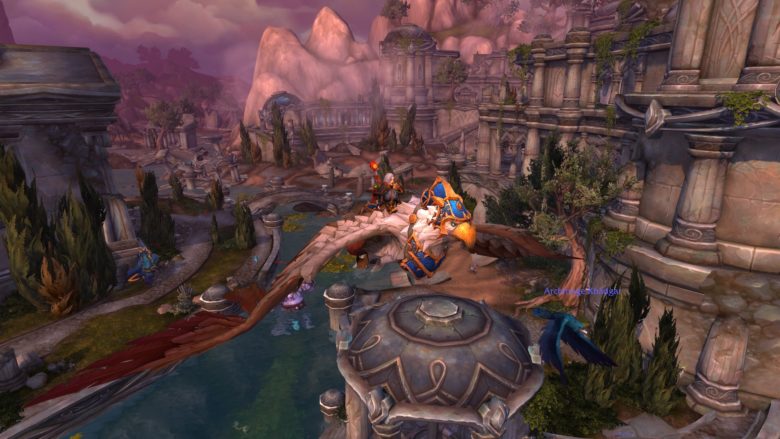 I started in Azsuna because it was located in the lower left hand corner of the Broken Isles map. If there are no obviously breadcrumbs, I will probably just go left to right. 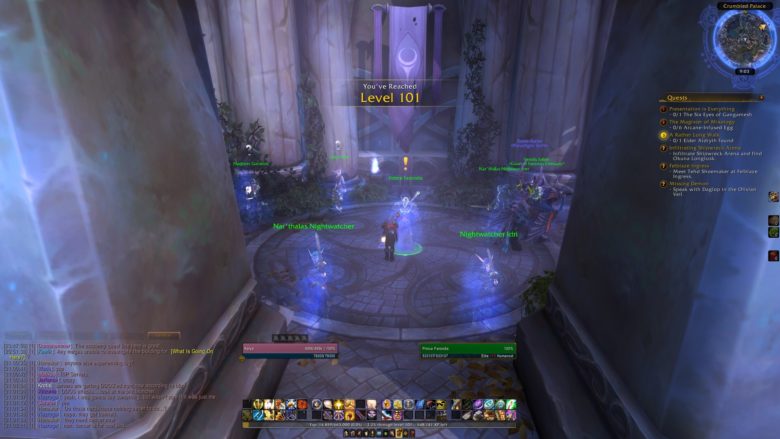 Going to honestly resist the urge to power level to 110. What’s the rush?

Progress report for day 1: Hit level 101, managed to complete one-and-a-half quest chains in Azsuna, obtained Ashbringer, did some of the class hall quests, sighed at Khadgar. I don’t know what the other class hall content is like but the paladin quests so far are fantastic in both content and lore. They feel more connected and important than anything from WoD if that makes any sense. I am also enjoying having a secret paladin clubhouse, though we will see how they pan out after the novelty wears off.

[Spoilers for Azsuna] Favorite new NPC so far has to be Runas the Shamed. I was expecting a betrayal but he kept his word, helped save the oldest blue dragons and in the end, thanked you for giving his last sane moments meaning before slipping away. I didn’t expect that to come from an NPC that initially felt like a parody of Tyrone from the Chapelle show. Feels. 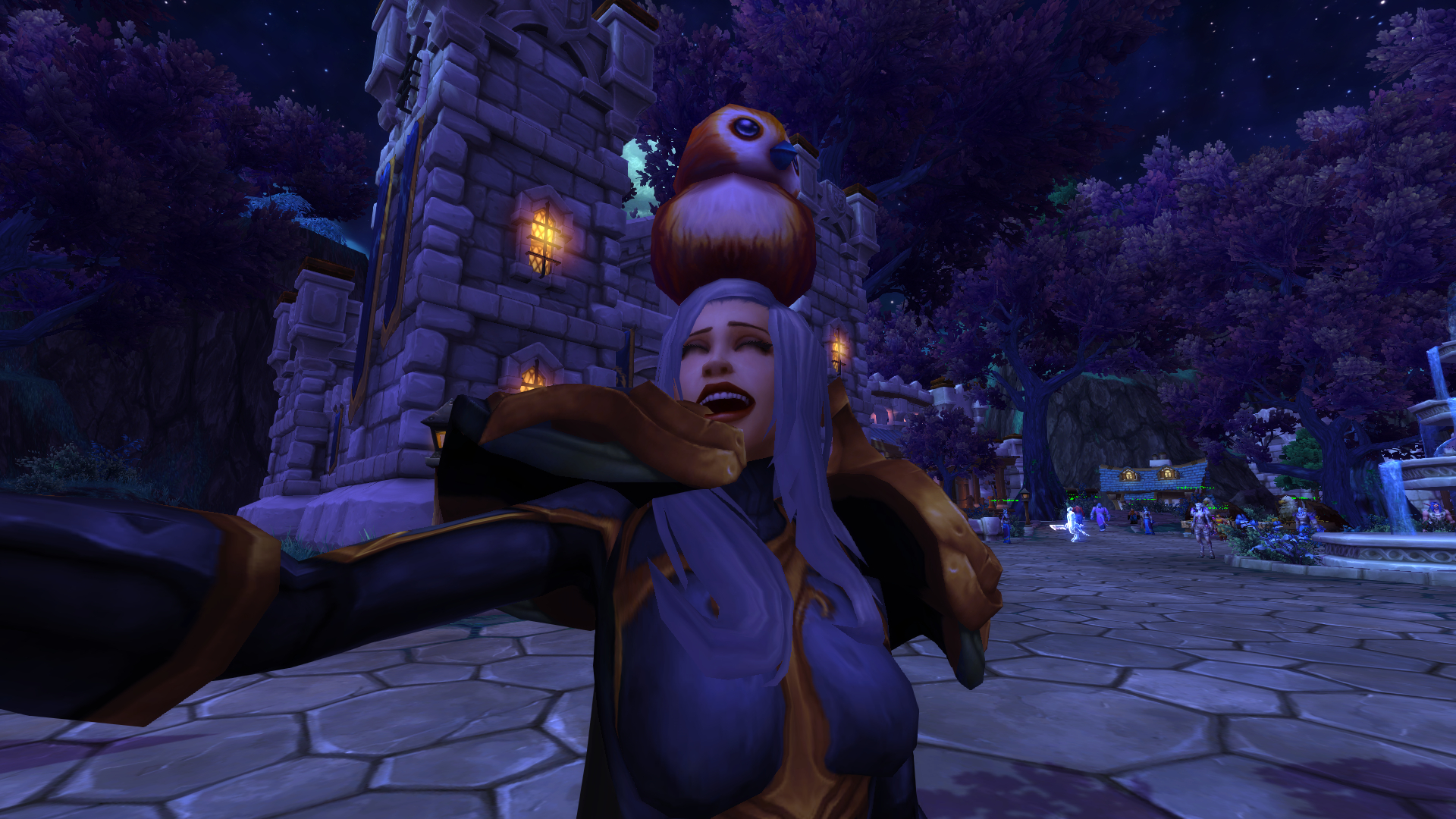 On the second to last day of WoD, my garrison finally gave to me…

…That stupid S.E.L.F.I.E Camera that I have been wanting since re-subbing a month ago. And with that my lovely garrison, I bid you adieu. You were a cool idea but ultimately ended up being an elaborate iPhone game that killed half the social aspect of the game. So, here’s to a new expansion pack’s worth of good times and stupid selfies. Going to try to avoid spoilers and screenshots while at work tomorrow. 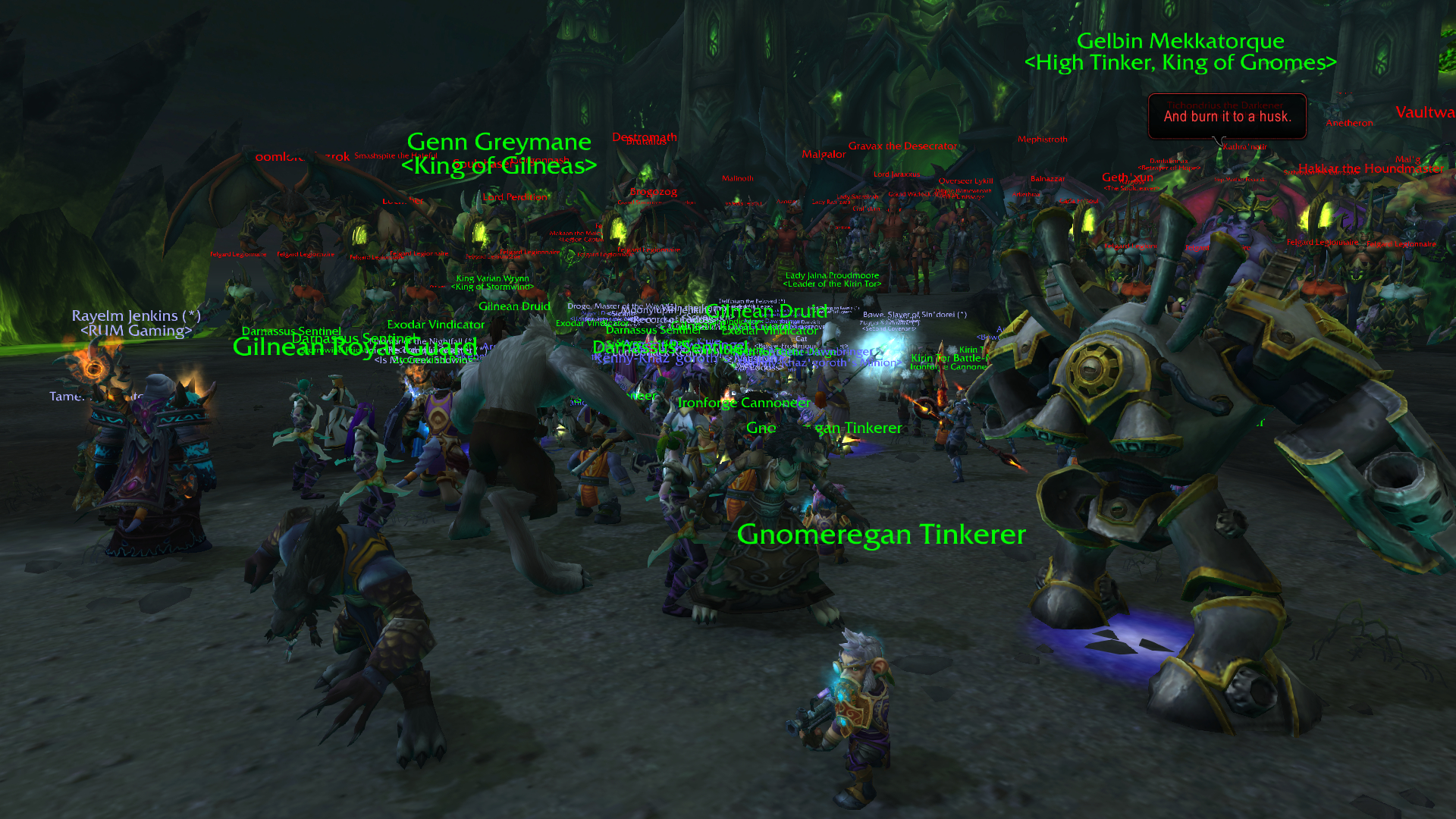 Huh well image that… If you add content to a game, it becomes fun again; Who would have known? But in all seriousness, we enjoyed the invasion scenarios and cutscenes quite a bit and are currently enjoying catching up on the bits and pieces of content missed during our absence from WoW. The invasion gear has also rather quickly replaced a fair amount of the crappy LFR and Timewalking gear that I have been slowly accumulating. Overall, it is a suitable farewell to WoD and transition into Legion, which we are looking forward to playing at the end of the month.

I really wanted to boost either my Shaman or Druid to 100 but the Shaman is only 20 and the Druid is 45. In order to get the profession boost, which is what I really want (because screw grinding anything, especially JC, from 1 to 700), the boosted character needs to be 60+. The only character even remotely close to 60 would be my DK, who had previously been at 58 since Wrath of the Lich King. I guess if we are being totally honest, the likelyhood of me even playing a 4th alt beyond profession muling is abysmally low. In that regard, I suppose it doesn’t matter which character I boost so long as it is above level 60. 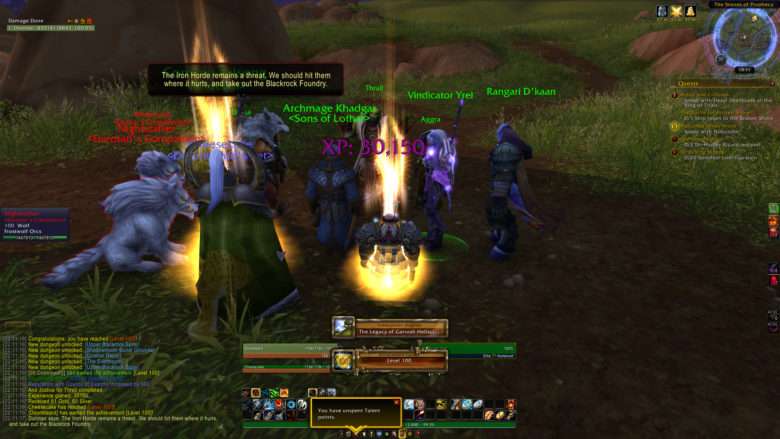 The hunter is finally 100 as is my newly rolled Demon Hunter. This marks the most max level characters that I have ever had (up from 2 to 4). I think my favorite part of the new class is either the eye beams or being able to jump off of your flying mount at great heights and gliding around with the wings.

I was hoping to get Draenor flying before Legion, but I have a feeling that Saberstalkers rep is going to take too long to grind out. Everything else can be completed relatively trivially. 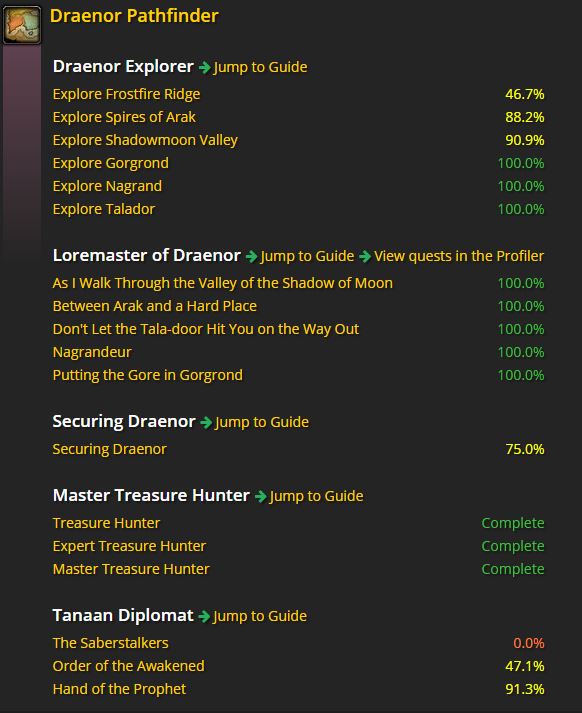 My Pending Return to WoW

Like much of the player base, my husband and I are planning to return to the World of Warcraft, albeit for a brief month or so, when the Legion expansion launches at the end of August. The pressure however, of seeing more and more friends filter back into World of Warcraft over the past month or so has been increasing. Now that the pre-expansion patch is out, I am quite tempted to re-subscribe a bit earlier than originally planned.

I haven’t really been “into” WoW for about two years, so Legion has felt like more of an obligatory/out of curiosity purchase more than anything else. As such, I have neither paid much attention to any WoW related news nor am I versed in any way on any of the changes that have been made to the game, classes, etc.

That said, let’s say that I do re-subscribe. What do I do? I guess I can try out the new class, LFR old raids, or see if enough people are playing at the same time to do something. Or I guess, I can take the extra time to re-learn how to play this game…

In any event, I have already re-downloaded the game, updated my interface, and re-configured my gamepad so I guess it’s just a matter of time.

PS: I did actually re-download the entire game this time onto the new drive (yada yada bought an SSD for Prime Day) instead of just copying over the same WoW folder that I have been using for a decade from computer to computer. It was kind of funny though, having a WoW directly full of old patch files stretching all the way back to Vanilla.