This post is totally not related to any gaming topic but, I am for once quite pleased with my desktop wallpaper. Though, I am not really sure how much I care about that sort of thing anymore, given that I almost never see my desktop nowadays (game/video in one screen, Firefox/working on something in the other). I really wish that a higher resolution image of the Star Wars painting existed somewhere. It looks fuzzy because I had to scale it up in size to fit my resolution. 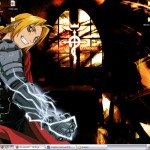 You know, I used to rotate wallpapers fairly often back in the day; In fact I found an old ass screenshot from 2004 (posted on the right) while picking through stuff on an ancient Deviant Art account that I forgot had existed. If anyone bothers to find it, there are a couple of odd things posted on that account that I don’t think I bothered uploading anywhere else. I wish I had more old desktop screenshots; They are a snapshot of anything that I was interested in from that point in time.