I have a small headphone fetish and apparently cannot function without being able to properly listen to my music wherever I go. I have a pair for every occasion: At home/work, on the go, running and Ventrilo. If you wear headphones often, it’s actually worth dishing out a little extra cash to get a not crap pair. In my experience, most of the extremely cheap ones break easily (stress fractures on the headband near the ear cups, loose wires).

So my old headset broke last week: The sound coming through the earphones was extremely muffled and the microphone intermittently muted or reduced itself in volume. I could have just sautered the loose wires or ghetto fixed it, but why pass up on an excuse to get a new toy?

I was using some really clunky Plantronics headset. The microphone was actually pretty good, but they were uncomfortable and the headphones sucked (sound was way trebly). They were way too snug and bulky; Never get faux leather earmuffs, they crack over time and stick to the side of your head whenever it is warm. Tight headphones, in addition to giving you a headache over a long period of time, are impossible to wear with glasses.

I ended up getting the Razer Carcharias. I’m a pretty big fan of Razer’s line of computer peripherals (as seen on any of my workspace pictures). I was somewhat dubious of their audio products (headset is different than a keyboard or mouse), but the Carcharias had received good marks on most review sites so I gave it a go. It is very comfortable, it feels notably lighter than most other headsets without feeling shoddy or flimsy. 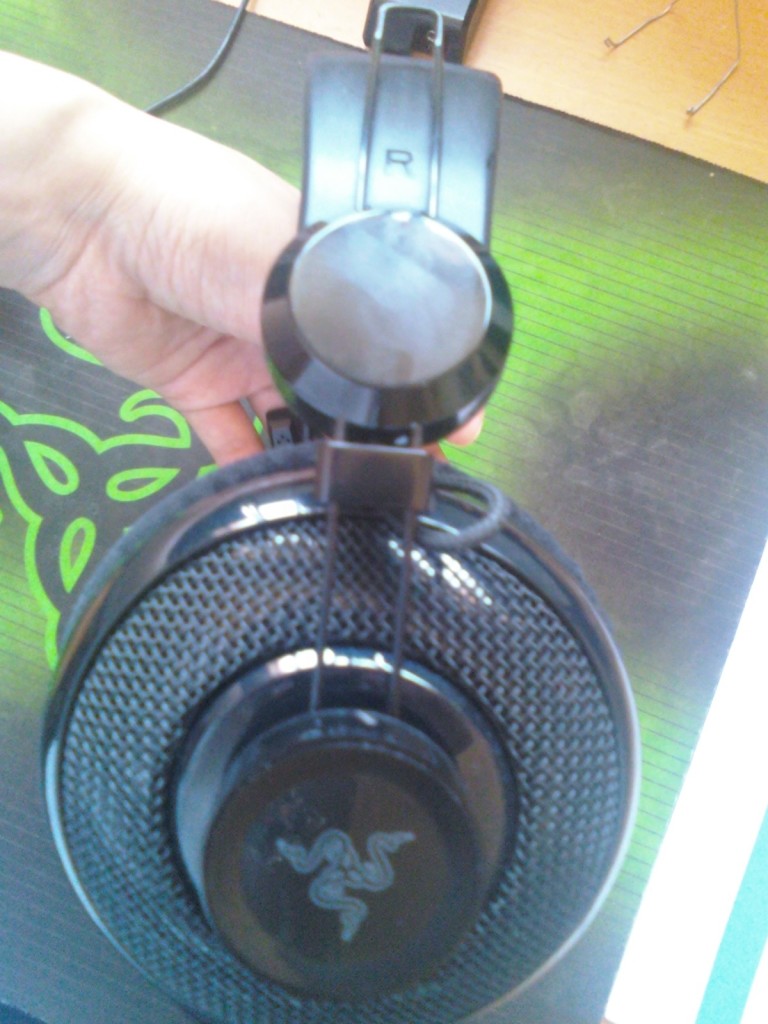 The headband tension is tight enough to seat the ear cups against your ears well, but not tight enough to pinch your temples off. Consequently, they are very comfortable to wear for long periods of time, even for folks who wear glasses. The earmuffs are plush and velvety. I am partial to this type of material because it is soft and doesn’t stick to the side of your face when it is warm. It does collect lint though.

Each ear cup is attached to the headband with two stuff paperclip like wires that slide up and down to adjust to your head size. They are flexible enough to laterally move to fit the side of your head, eliminated the need to include a swivel joint. Not having a moving joint against the side of your head is a huge plus to anyone who has long hair that gets caught in things on a constant basis.

There’s an in-line remote with a volume and a mute switch on the cord. Both are easy to use and stay put even if you shuffle around quite a bit (I have had issues with loose mute switches). Other than that, I suppose they are much like the remote on any other pair of headsets.

The braided cord is tangle resistant and fits snugly into the rubber sheath that attaches it to the base of the headphone cup. The cords on cheap headphones jiggle around quite a bit when you yank on them, leading to breakage. This point is a huge nitpick but: When you twist the braided cords they get increasingly curly. I find that slightly irritating. 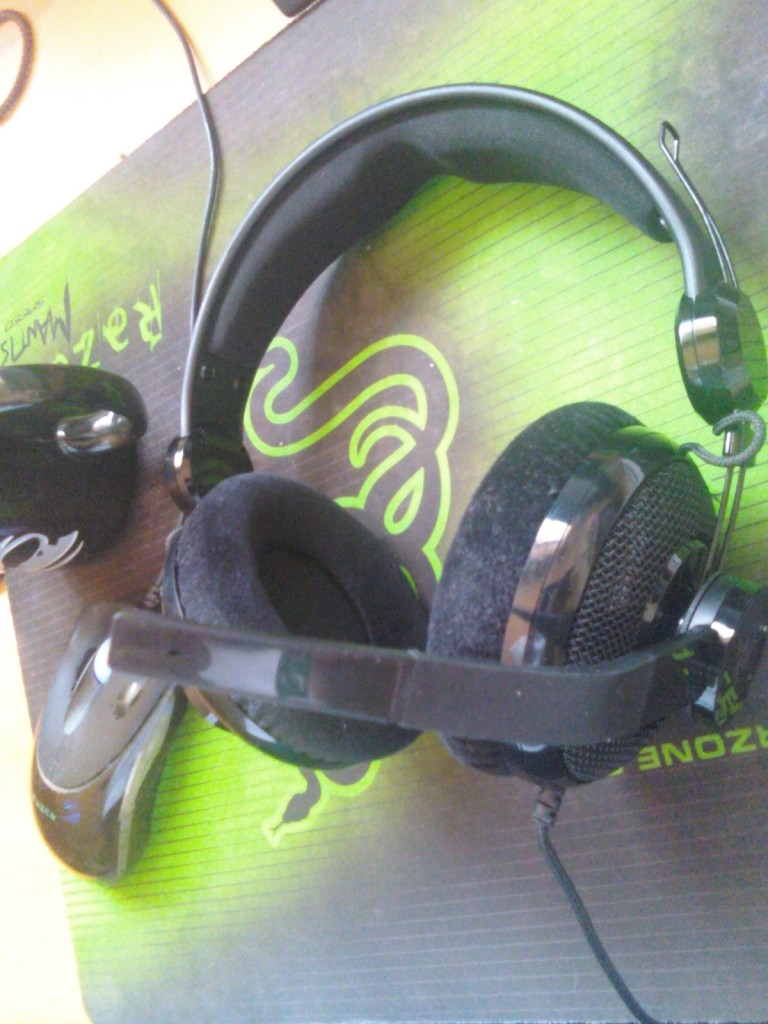 The Carcharias isn’t a sound isolation/cancellation set of headphones. If you play in a noisy environment, you will still hear background noises, your mother or wife sneaking up behind you, whatever. A couple of reviewers felt that the noise canceling microphone was sub-par, but it seemed more than sufficient to me. It was at least equivalent to the mic on my old headset, which was pretty decent (err according to general Ventrilo opinion). It is also worth noting that I have all of my headsets plugged in through the analogue input ports on my X-Fi front panel.

The headphones themselves are a bit lacking bass wise in my opinion. They are great for gaming, but only above average to good for music. It’s not that they are tinny, trebly or bad, they just don’t sound as rich as mySennheiers (which were in the same price bracket). If you aren’t extremely picky about sound, they are way more than adequate and far better than most of your run of the mill headphones. Audiophiles though, will probably opt for something better.

They are a bit pricey. I think the average retail price is about $70 give or take a couple of dollars. Overall, they have been great so far.