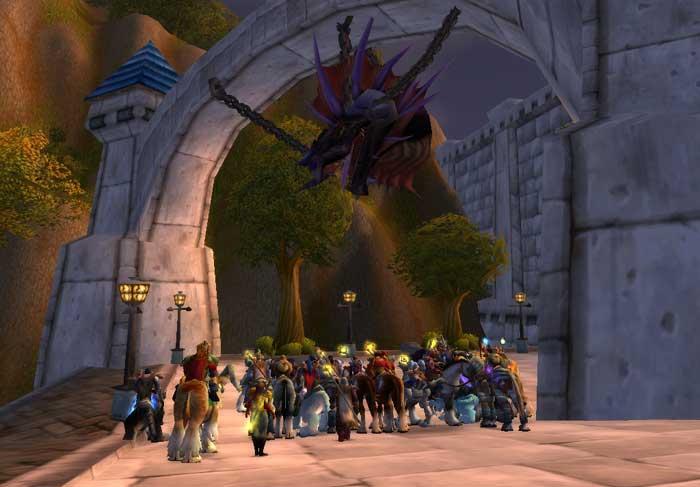 It looks like Onyxia is making a triumphant return to the game in patch 3.2.2 in honor of WoW’s 5th anniversary. She’s going to be a 10/25 man-raid instance, updated to current raid mechanics with loot matching the Tier 2 items! ZOMFG, a 310% flying mount modeled after Onyxia.

She has lurked in her lair and done battle with the many brave adventurers who travelled to that familiar location over the years. Now, in honor of the World of Warcraft 5-year anniversary, the dreaded brood mother Onyxia is being revamped to make a return to the forefront of Azeroth, as part of our big plans for the upcoming 3.2.2 content patch.

This permanent update to Onyxia will convert the dungeon into 10- and 25-player modes. We will be adding new items to Onyxiaâ€™s loot table that have the same model as some of the classic loot from this dungeon, like Tier 2 helms, with stats updated to match the current level of content. There will be a special new item too: a normal drake-sized 310% speed flying mount modeled after Onyxia herself called Brood of Onyxia. We will also be updating the encounter mechanics to be more fitting for modern raiding, but we can guarantee players will get to experience the frightening horror of deep breaths once again.

Then for a limited time, after the 5-year anniversary event officially begins in November, anybody who logs in will receive an Onyxia Brood Whelpling pet.

Weâ€™re very excited to bring this classic encounter back to provide a fun new experience for both new and veteran players. Further details will be available in the near future, and we will be setting up the Public Test Realms soon to help test out this fight along with all the new content we have planned for the patch. Keep an eye on the forums for updates!

I’m personally looking forward to wearing my Judgement hoodie once again :P. Oh edit: I never really noticed this before (I don’t frequent the WoW forums much at all nowadays), but apparently the WoW forums have their own blue tracker, RSS enabled and everything. Neat!