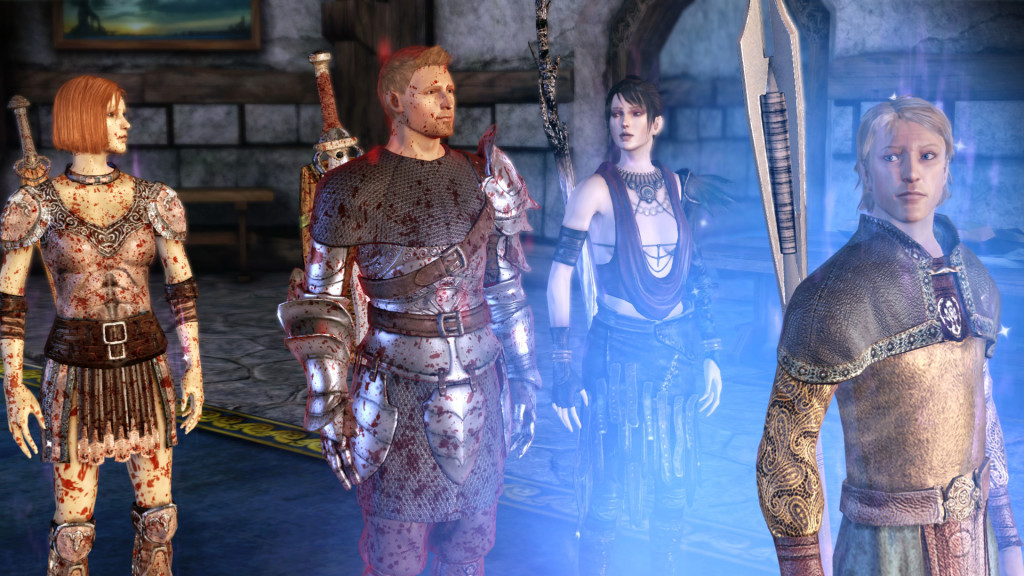 Dragon Age is probably the most captivating game that I have played in recently memory. I logged well over 50 hours into the first campaign and have started up a second campaign as a different race and class, which I guess, is pretty rare for me since honestly, most RPGs hold very little replay value for me. TL;DR for the rest of this article: Dragon Age is a fantastic game if you are in any way into fantasy games buy now.

Depending on what race and class combination you choose at the beginning of the game, your character is given one of six origin stories to start with. Each origin story is more than just a background intro; It helps to weave a tale of political intrigue and integrates into the main plot line of the game, probably more-so than most other choice based RPGs. A human noble for example, would be addressed differently than an elf would. It adds an subtle flavor as well as perspective to the story line.

The game as expected is fairly heavily influenced by character choices. There a some instances blatantly obvious dialogue choices ala Fallout 3 and Oblivion (as in: the good option, the neutral option and asshole). For the most part though I thought that they were very well done. Some of the choices were genuinely difficult. There were a couple of occasions in which you were forced to side with people. What you choose throughout the campaign will also affect the outcome of the game to some extent. 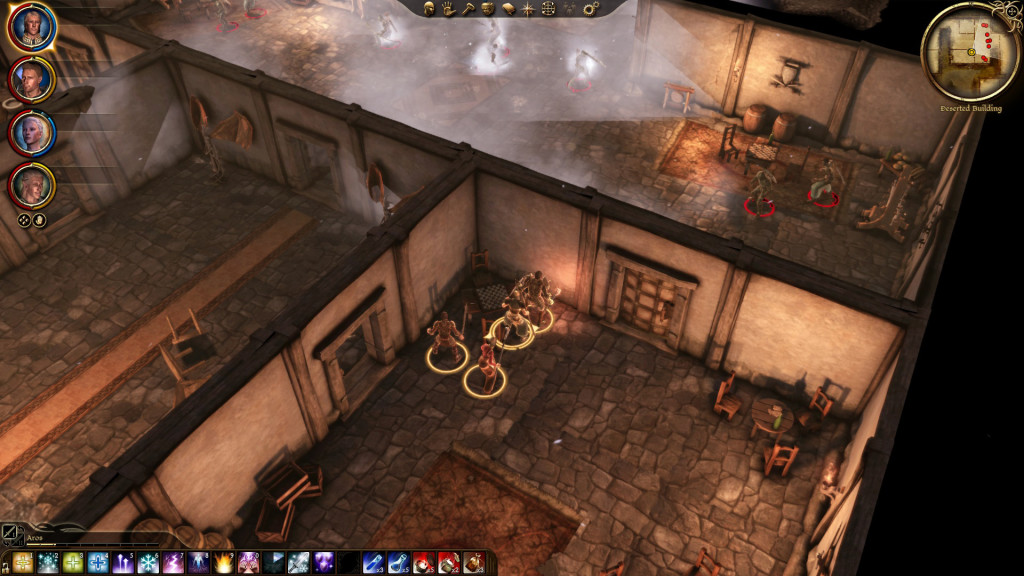 After you are set along the main quest line, it’s still more or less the same game no matter what you do, but origin stories and player choices make it different enough to warrant a second play through. Influence is a very overlooked factor in most games of this genre. Though we aren’t where I’d like to be in terms of how much the player should determine the outcome of the game, this is definitely a step forward.

The plot follows a classic good versus evil fantasy tale format. It’s obviously derived from any number of fantasy settings: Elves are tree huggers, magicians are aloof, dwarves live in mountains, and humans are for the most part assholes. But that’s not necessarily that bad of a thing is it? I mean, executed properly, it is a formula that has for the most part withstood the test of time. Most importantly, the land of Ferelden is absolutely rich with lore and history. BioWare really brought it to life with the amount of detail that they have poured into its creation.

The story is solid and gripping. It was captivating enough to hook me for almost 60 hours, which is pretty big considering my bad track record of getting bored with games or sidetracked and never picking them up again. There were a couple of areas that seemed to drag on a bit too long. The Deep Roads and the Fade could have been shorter as I spent the better part of several hours in each of those dungeons. Other than that, it was pretty well paced. 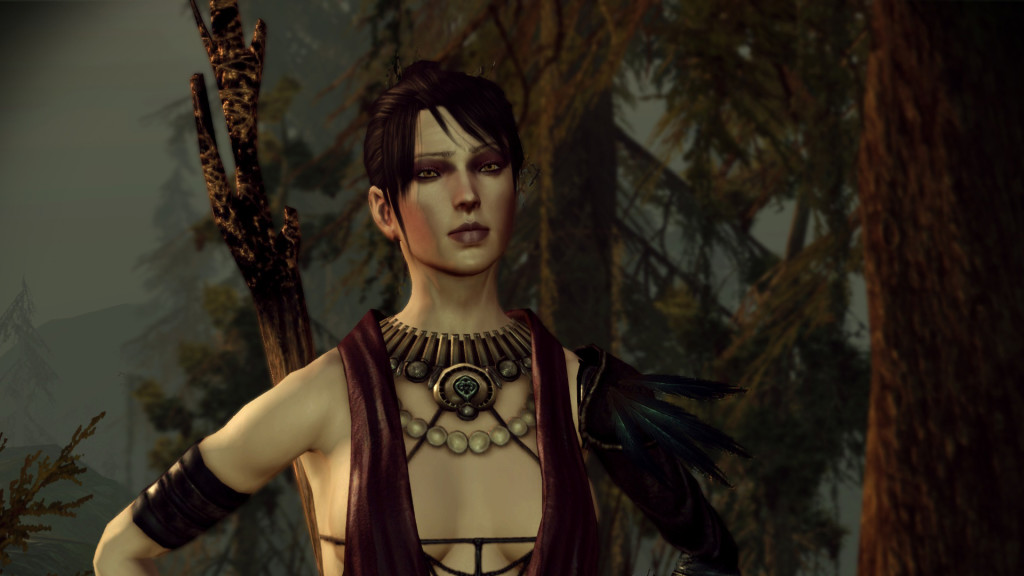 Each party member has a distinct personality. I’m usually not a big fan on RPGs that force you to choose between party members, but that’s a factor that has never really bothered me about BioWare RPGs. I don’t know about how everyone else plays, but I tend to favor one group of characters at the extreme exclusion of anyone else. Experience is distributed to all companions whether they are in your active party or not, eliminating the need to level grind or rotate party members out of fear that the plot might force you to swap people in (I really wish Square did this).

The dialogue is nicely written and the voice acting is well done. I am particularly picky about the latter; nothing spoils a game more than cheesy overdone voicing. The way Morrigan and Alistair were portrayed was especially well done in my opinion (Alistair had a lot of great lines). I actually didn’t realize that Claudia Black was Morrigan until fairly recently (Stargate: SG1, FarScape). I thought that she sounded familiar but just couldn’t put my finger on it. The silent hero thing is awkward. I was kind of hoping that the main character would have been voiced ala Shepard in Mass Effect.

I was very impressed with the combat system. It’s really scalable to be as complex as you want it; From World of Warcraft like me button mashing to a highly tactical, almost turn/RTS strategy feel. Party member AI is customizable in a manner that is very similar to Final Fantasy XII’s gambit system: It allows you to setup a prioritized series of scripts (i.e: shoot an Arcane Bolt at the enemy with the lowest health, heal any party member < 50% HP, etc). Or, if you are lazy there are presets available for the AI scripting (healer, tank, etc). I did that most of the time and it worked fine. 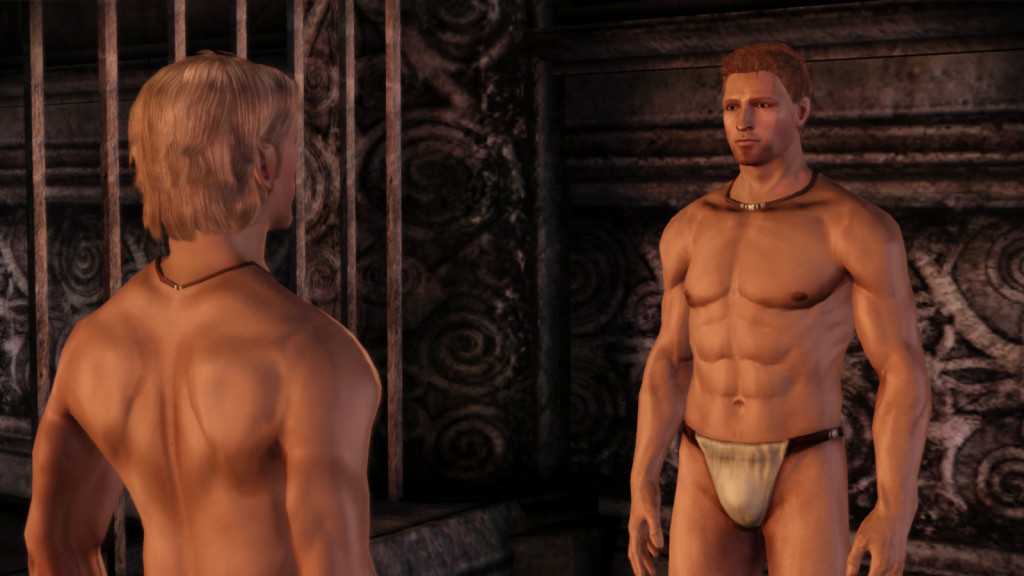 BioWare, more-so than probably any other game studio did an exceptional job of tweaking the interface between the console and PC versions of the game to make sure that neither felt gimped for the sake of the other. If you have ever played a PC based MMO, Baldur’s Gate or any other similar game then you will feel right at home. By the way, I highly recommend playing the PC version if you can. Though I haven’t played the console versions, from what I understand they are fairly different in terms of what you can and cannot do with the interface. For example, the PC version lets you mouse scroll zoom out into a bird’s eye view tactical setup where you can click drag multiple units ala Baldur’s Gate or even kind of sorta like an RTS.

Dragon Age is good looking and polished, but nothing that I would consider graphically astounding. The armor sets and characters are well designed and unique looking. Areas are also well plotted out and lush with detail. The texturing though could have been better in my opinion. For example, something just seems a bit off about the skin texturing in my opinion. It’s too glossy or something. I kept thinking about during certain (sex) scenes. I mean, it’s like they were bathed in cocoa butter or something.

Bottom line: Dragon Age is a shining example of a fantasy RPG. I mean, what else can you really ask for?

Next ArticleOn Choice Based Gameplay and WoW Updates