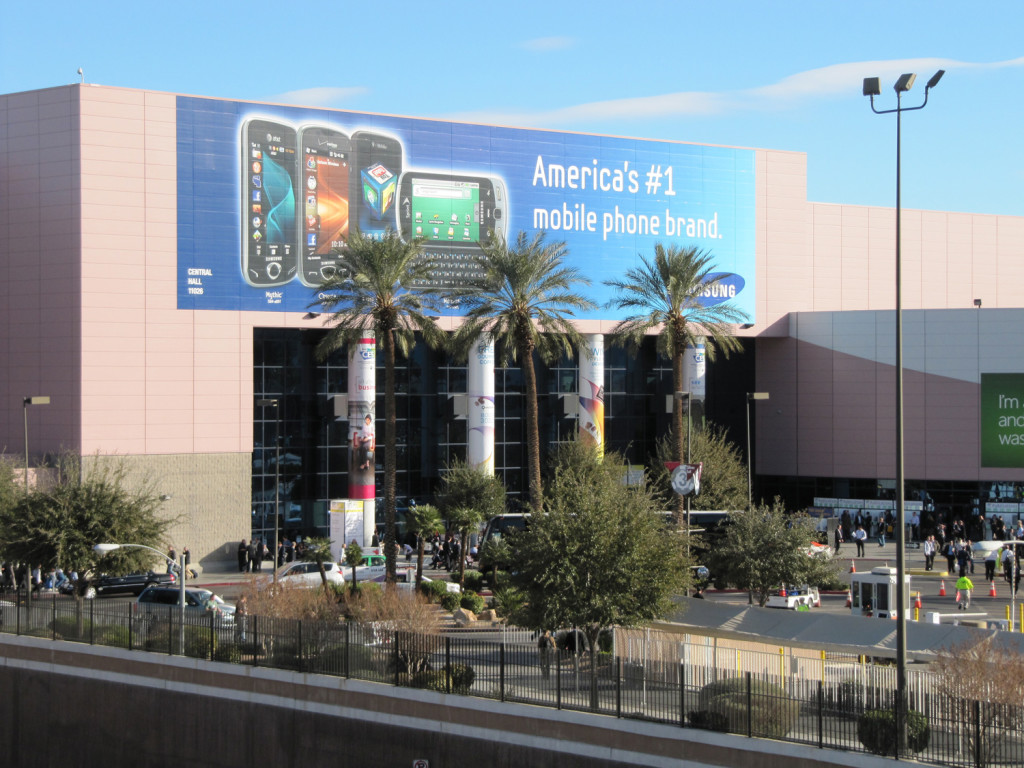 Late posting for the lose. I guess CES is little more than an afterthought at this point given that I am posting this way after the con had ended. Anyway, I had the pleasure of attending the Consumer Electronic Show this year with someone special (<3 2-man raid FTW). For those who don’t know what CES is: it is a trade show held annually in early January, showcasing the latest and greatest in the world of gadgets, electronics and doodads.

So the show: Being a first timer, I can’t really draw a comparison to last year’s CES. It’s my understanding that the recession has obviously hit the electronics industry. There was a lot on display, but not too many big announcements or anything that reallywow’d me in terms of being innovative or new tech. Of the popular ‘themes,’ 3D home theater technology was obviously the big thing this year; Nearly every major booth had some sort of 3D television or device on display. 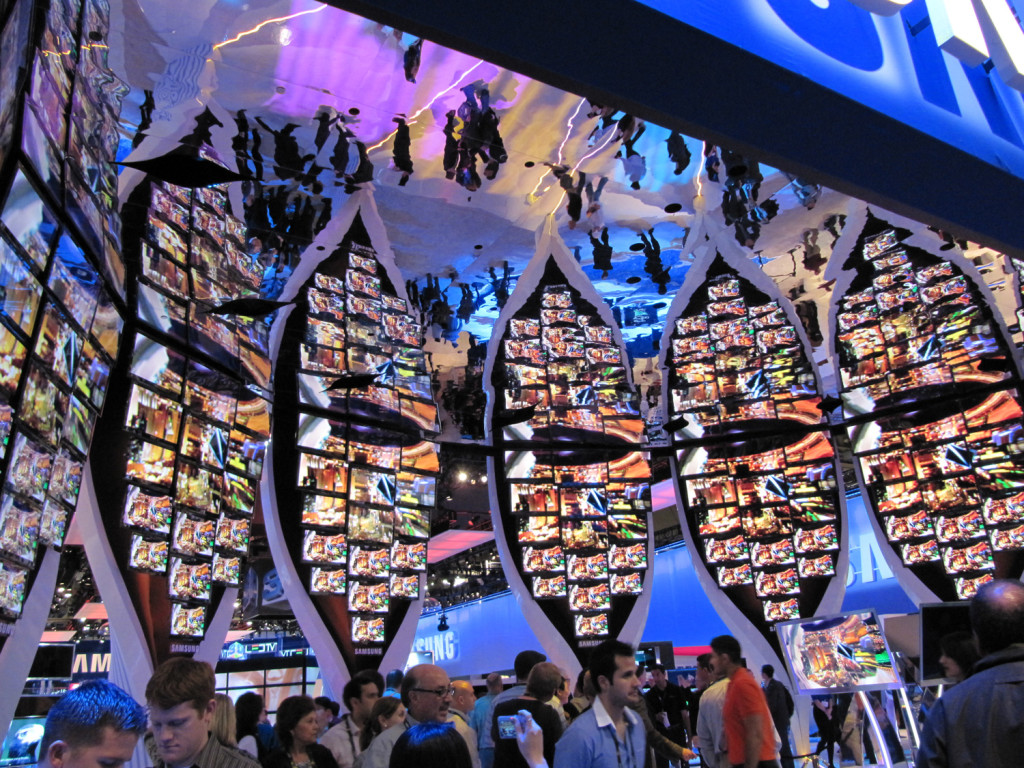 All but the lenticular 3D television display (missed this one sadly) utilized wireless polarized glasses with active shutter technology to produce the 3D effect. They are kind of like the movie theater glasses, but chunkier and more expensive. The televisions themselves need to be 3D capable in order to work, though speculation is that at some point, this feature will be integrated into the new televisions whether you want it or not.

I honestly don’t see it being integrated into home television viewing life any time soon. The 3D effect itself is pretty neat, especially on movies and videos designed to maximize the effect (like Avatar). It’s still an expensive gimmick though. The equipment is expensive, the glasses are kind of uncomfortable and dumb looking, and there aren’t many videos designed for it yet. One of theTV’s was very angle sensitive. The effect didn’t seem to work well at all unless we were standing dead center.

I was very impressed with what Nvidia had to offer in terms of 3D for games. I know that this has been on display at several cons, but I’ve just sort of brushed over it before. It is still a glasses based system that requires a special monitor (well, 120hz refresh rate); and it’s still expensive, but it’s usable on the current generation of video cards and looks fantastic in my opinion. I think that this system has a lot of potential in the future but it’s still too expensive and too taxing on most systems (huge FPS hit when the 3d effect is on according to several benchmarks). 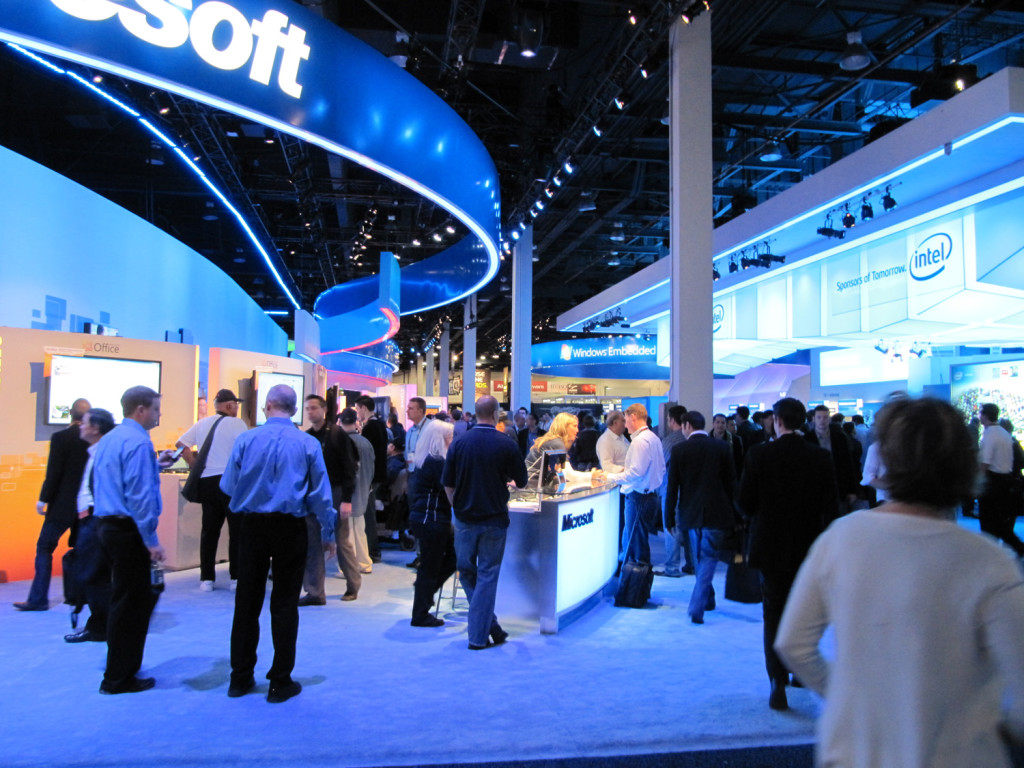 We spent quite a bit of time at Microsoft’s booth playing with the Surface and enjoying the cushy carpet on our weary feet (seriously, it was soft). The 4-player touch tower defense game was one of the things that instantly drew me. Multi-touch in general was on display in multiple booths. I think I have a video somewhere of Intel’s cube thing.

The LEGO MMO looked much much better than I really had ever expected it to be for whatever it is worth coming from a dedicated WoW veteran. I have looked into it further since the con and have only heard and seen good things. I am pretty jaded on newMMO releases at this point but I might keep track of this one because it looks interesting. Oh, the bit about being able to build things in game and then order the model in actual LEGO bricks is pure win. 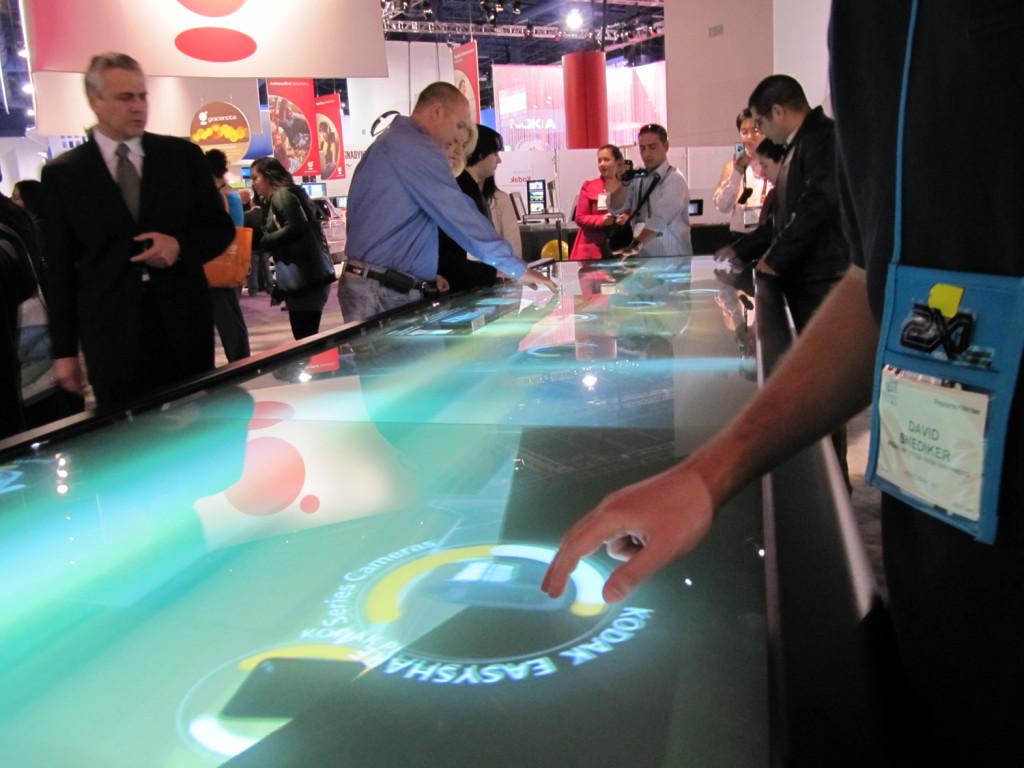 D-Link had a router that also served as a digital picture frame and NAS drive dock. I am not sure why this sort of device isn’t more common. Networking equipment is butt ugly and a pain in the ass to keep out of sight or hide unless you are particularly clever about strapping things to the underside of your desk. So why not make them attractive looking of functional in some visual sort of way? D-Link offers this solution.

Overall, CES was great. I attended mostly for vacation purposes. Consequently, I missed quite a few things that I kind of wanted to see and unfortunately didn’t bother taking too many notes. I think next year I am going to see if I can get a press pass and perhaps uuh have an itinerary of some sorts. It’s such a huge con, so much to see. I took quite a few pictures, most being goofy/cute couples photos for my personal collection. I’ll post of the a few on this site later.