[FFRK] The Source of the Mist+++ Postmortem 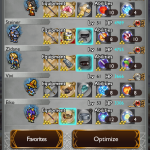 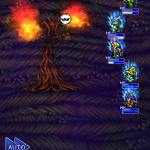 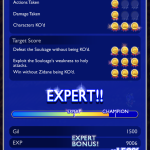 That was an annoying fight. I have very little FFIX item record synergy, but still beat it. I can probably master the encounter by swapping around a few things but we’ll have to see about that. So close :/. My setup:

RW: Hymn of the Faith for regen and to take the edge off of the 2k AoE that is is almost guaranteed to get off before you can do anything at all. May have been better off with Boon for the group Haste, but reluctant to drop the group heal because Fira spam :/

First round starts off with: Dark Buster, Protectga, Shellga, Hymn of the Faith, and a melee attack. If Dark Buster doesn’t blind him on the first hit, you will probably have to S/L unless you are lucky enough get get it on the second try without being AoE’d down. The trick with the water and fire abilities is to chain cast them so that he is not stuck in the burning state for too long. Waterja has a shorter cast time, so it needs to be cast at just the right time to avoid it going off before Fira Strike. Because of the touchy timing, much of the battle was fought at an irritatingly low speed to make sure that all abilities were executed in a properly timed manner. He still will get a guaranteed Fire Blades cast off as soon as he gets set on fire. Luckily, since it is physical damage, it will most most of the time if he is blinded. MOST of the time…

Really wish I had Light’s Wrath for one of my physical characters.