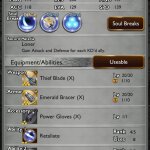 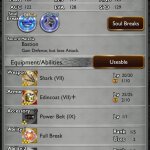 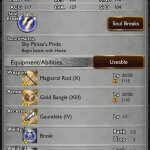 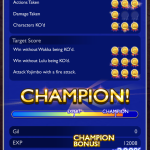 Yojimbo wasn’t all that hard of a fight with full physical mitigation.  He does have a few AoE attacks but as a whole, most of this fight is comprised of a single target physical attacks. Keep in mind however that you are eating two physical attacks per round since Diagoro will also single target attack your party (he is not targettable). All-in-all though, it is a perfect setup for a retaliate strategy.

I seldom utilize the advantaliate or tauntaliate strategy because I do not find it to be a particularly interesting style of play. In the time that it took me to perfect my cheese strategy for this boss fight. Interestingly enough, it probably would have been way way easier to just solo the fight with either Cloud or Auron. The difficult part of this fight is of course competing the fight without Lulu and Wakka dying.

The Target Score goals for this fight are to: Attack him with Fire and win with both Lulu and Wakka alive. Keep in mind that petrify will effectively remove a character from combat without technically killing them allowing the retaliator to receive more damage bonus from Loner and receive all attacks. In short: You will want Lulu to cast Firaja on the boss, petrify Wakka, petrify herself, advantaliate the rest off the fight. I found it easier to have Wakka cast Power Breakdown during the first round as that did reduce much of his damage. If you can time it right, you can probably get a Full Break off before he is petrified. In my game, I didn’t think it was worth the risk of Lulu eating another attack and dying just for a Full Break (their attack speed seems to be fairly high). Ultimately, it wasn’t necessary. Setup

With FFX Record Synergy, Cloud has a total attack of 402. With the Loner Record Materia, he gets a 20% damage (not attack) bonus for each empty slot. I do believe that Petrified characters still give the Loner buff. So that would be a total of 80% bonus damage for each retaliate. Nice.

Second Round:
Lulu: Break on Wakka
Wakka: Full Break if you can get one off before petrify.

Third Round:
Cloud: Drain Strike if Cloud ate too much damage, otherwise retaliate.

You obviously have to S/L if either Lulu or Wakka dies or if either of them aren’t petrified before Break runs out of charges. I ended up refreshing retaliate every other round. So: Retaliate > Something else > Retaliate and so forth.