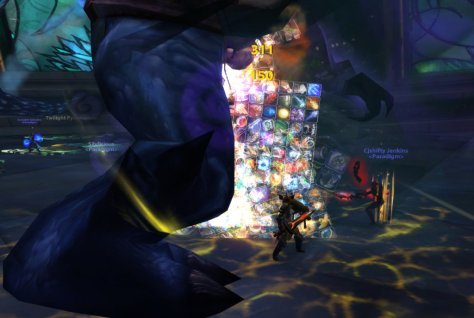 The screenshot: While we were raiding in Ulduar this weekend, WoW did one of those complete graphical freak outs for a bit. Reloading my interface fixed most of it, but there was a still a bit of residual weirdness. For some reason several of the spell graphics were being replaced with my bank inventory screen, freaky. Did you know that the giant thing above Mimiron is a huge can opener? I didn’t, and I’ve been there how many times? lol.

I have been working on the Loremaster achievement once again bits at a time. I finally completed the 40 or so odd Eastern Kingdom quests that I was missing. Turns out that Keiya never did Searing Gorge or Burning Steppes. You see, the problem with alts is that I will frequently forget who did what, where and when. Up next? The 356 quests that I am missing in Kalimdor, QQ.

Brewfest is here and if you are anything like me, it is the very last holiday achievement set needed in order to obtain the much coveted Violet Proto-Drake. A couple of things that I’ve noticed:

The barking quest yields 15 tickets, the invasion yields 10, and 35 tickets are easily obtainable from Ram Racing. That’s around 60 per day. What is the keg run theoretical max? I got 19 turn-ins on my hunter earlier and I am pretty sure that I can squeeze out 20 by cutting a few more corners but I don’t imagine being able to run it too much more than that. Oh well, I’m sure there’s a YouTube video of some dude doing 30. Anyway, here is a macro that I’ve been using for the sake of not having to drag several things onto my button bar every day:

Assuming that you have a Complimentary Brewfest Sampler, it will automatically target a Dark Iron Guzzler and toss a mug during the invasion. It will also spank your goat during the keg race. It should be fairly easy to add in the other non-daily quest items if you so wish.

Next ArticleWhat a Long, Strange Trip It's Been