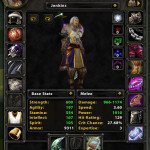 The image is for future reference and because I forgot to upload a screenshot relevant to this post: Ret gear unbuffed.

I really want to love the exotic pets, but they are all super annoying. Holy frijole and I thought that the crocodile hiss was bad. Please Blizzard, please hotfix the stomping, the roaring, and the constant flaming sound that the MC Core Hounds make when you stand next to them. My hunter Doombeard will most likely just stick with his cat Cheesecake.

The server went to shit over the weekend, the instancing server specifically. The realm as a whole suffered from occasional lag spikes, but I wasn’t getting constantly booted off so it wasn’t all that bad. It took us around twenty minutes to zone into any raid instance on Friday. Once the raid ID was created, it was fine for the most part.

Saturday on the other hand: We had a full raid for the Black Temple but had to cancel, after humping the raid swirly with several other groups for two hours (Bejewled FTW). There were approximately 30 people total across all of the BC raid instances that event, but a crapton of people in the 5-man dungeons, Scarlet Monastery in particular for the Headless Horseman. Did the seasonal events and achievements break something? Next time: Reserve an instance ahead of time.

So raiding: If you have ever wanted to run any of the higher end 25-man raiding instances, now is the time. Super nerf. On Sunday I joined as a guest on a Mount Hyjal run. One shotted Rage Winterchill and Kaz’Rogal, wiped twice on Antheron; Not sure what happened after, I had to leave raid to sleep (work FTL). I picked up the pink toilet brush, which of course drops after I spec retribution and after it becomes fairly useless…

I did a lot of Halloween questing over the weekend. I finally finished off The Power of Pine quest, which was the last thing that I needed for the title. Recall that the collect 20 flimsy mask achievement is being removed as a title requirement, being nearly impossible to achieve and all. To my understanding, this will happen in patch 3.0.3, which should go live during the event.

Oh hey the honor points aren’t going to be reset. Well then, in that case I am saving them for level 80.