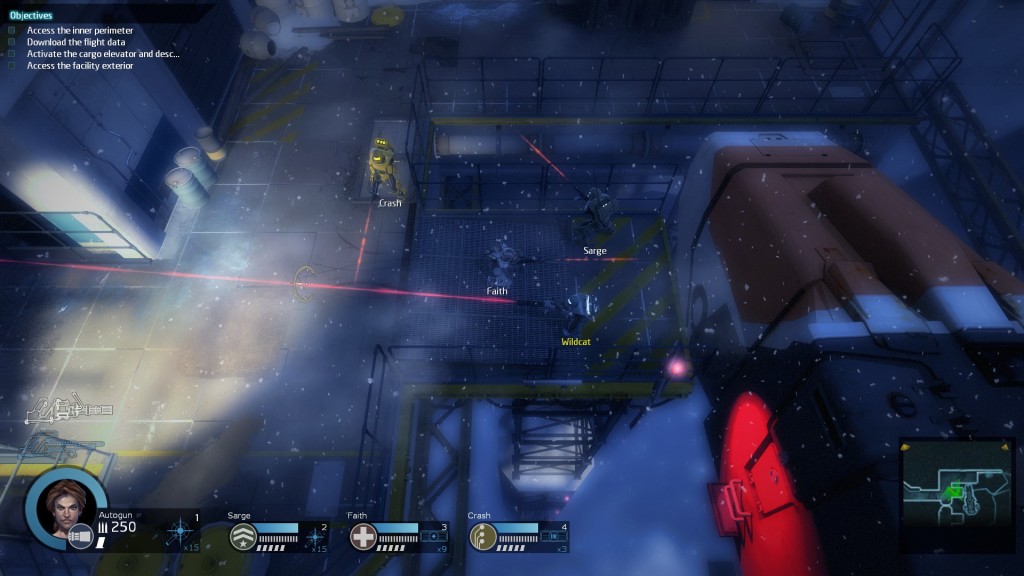 I lament, often on an almost daily basis about the lack of co-op support in our modern gaming society. So lo and behold what do the Valve Gods gift us with? An up to 4-player co-op game for free! Alien Swarm was originally an Unreal Tournament mod released in 2004. This release was actually developed by the original team after they had been scooped up by Valve (according to Wikipedia). It’s a top down 3rd person shooter with a sci-fi flavor. There’s not a whole lot in terms of plot, but that is not important. The only facts that need be known are that there are waves of aliens to kill on a space ship with your real life buddies.

You have a choice between four different classes and eight unique characters. Each player gets to choose a main and secondary item. You have 40 to choose from, they range from rifles, shotguns, sentry guns, to health and ammo packs. Most of the items are unlocked via a horizontal leveling system as in, you get more items at each level not better. Each class also has a unique class item. With two people playing co-op it took a bit of strategy in terms of what to pick. We had two people total playing last night and it took a bit of trial and error to figure out what worked for us.

Alien Swarm is a very nice looking game. The texturing is very nice, shadowing is very nice, the lighting is very nice. If there’s one thing that the Steam engine has always been good at it’s scalable graphical output per performance. Even with the graphics turned up to high and with the nice particle effects, I didn’t notice any slowdown or frame drop at all, no many how many mobs were on the screen. I will include a couple of screenshots at the bottom of this post so that you all can judge yourselves. If anyone wants video, I am sure that by now hundreds have been posted on YouTube.

The interface is for the most part very nice with a plethora of nice Steam touches: Steam stats, achievements, integrated voice chat, the ability to doodle on the map, etc. A few of the interface elements are confusing though. I feel as if there is probably a better way to handle the ammo and health notifications. Reloading confused me for a bit since you have to continuously glance down at the corner of the screen. There’s also little notification as to when you are reloading save for a small animation. I suppose I should know better. I mean, the party bars at the bottom are laid out in a WoW like fashion.

The controls are fairly straightforward: It’s a dual stick shooter. WASD for movement and mouse for aiming and shooting. Most of the weapon options are introduced as you play the game, though you may want to glance at them for reference. The keybindings are by default setup oddly. A few of them weren’t intuitive to how I usually bind things. It’s not that big of a deal, you just may want to check on all of the keybinding settings before jumping online to play.

Alien Swarm is short: It is one campaign with six levels. But fear not. Conveniently enough, the SDK was also released with the game so hopefully it won’t take people too long to jump on the player generated content bandwagon. Valve provided a sturdy foundation from which to build from; The rest is now up to us. Either way it’s not like one could complain too much, being completely free and all. Pick Alien Swarm up, grab a friend or three and play it. It’s fun and you have absolutely nothing to lose.