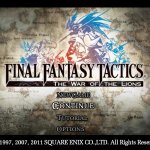 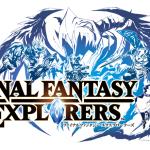 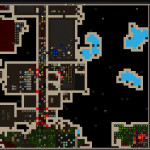 Final Fantasy Tactics
This title went on sale on the App Store a long-ass time ago and has been shamefully sitting on my phone untouched for well over a year, if not more. Given that Final Fantasy Tactics Advanced is one of my all time favorite handheld titles, I am unsure why it has taken me this long to finally play this game. I actually own the PSX game; I think it was gifted to me like 15 years ago and chance.

The great thing about turn based mission based games is that they are very easy to pick up and set down as time dictates. As such, FFT is now my preferred lunch time and couch time game. Decent plot, fun game, decent port, despite the fact that it hasn’t been updated in about two years. I haven’t played Final Fantasy Tactics A2 either. I may treat myself after beating this game

Final Fantasy Explorers
Final Fantasy classes and abilities + Monster Hunter + Basic MMO grinding = this game. It’s a grindy handheld action RPG with a plot that is vague at best. I like it, but it may not be everyone’s cup of tea.

Dwarf Fortress
I have played through several fortresses at this point. In regards to Outpost Stizashoddom from my previous posts: Ultimately, Kol the Possessed One ended up going insane because I was unable to construct a metal forge to fulfill his needs. He was promptly smothered to death by his peers, thus ending both his murderous rage as well as his short life. The fortress was forced retired after accidentally digging a staircase wrong and trapping/starving the only dwarves in the fortress with a pining pick. It unfortunately, created a situation in which I was literally unable to do much of anything.

My second fortress survived a while longer, including long bloody winter in which a third of the population was killed during goblin siege. They held out but never fully recovered and perished the following year during a second siege. Ultimately, my downfall (one of them) was not having a self sustaining source of water during the winter. Future fortress incarnations were built on a map with a river or some constant source of water. Still need to work on building a pump/reservoir system.