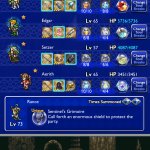 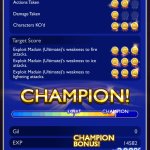 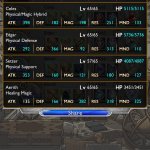 The Internet was right, Maduin wasn’t a very hard ultimate fight. After dealing with back-to-back Beatrix and Vossler, it’s nice having an easy one for once. His damage output is a joke until the end of the fight as long as you have some mitigation up. Magic Seal is mildly irritating, but it with decent enough damage output, it doesn’t last long enough to be that much of a threat. Here is the team that I went with:

I don’t have much to say about this encounter as there was not a whole lot of finesse required: I just applied mitigation at the beginning of the fight and then again after mass dispel. He casts Mass Dispel after Chaos Wave. As long as you time it and get your mitigation up ASAP, it’s no big deal. Aside from that, powered him down with PP and Blade Beam towards the end of the fight per usual. It’s worth noting that I do have decent weapon synergy for Final Fantasy VI.

Small tangent: Armor Strike is an ability that I find myself using more and more. It is perfect for situations where there isn’t a synergy weapon to around for each character. It doesn’t have a secondary benefit such as Lifesiphon or dismissal per se, but having DEF based damage means that Armor Strike provides super beefy damage characters that aren’t going to compete with other characters for ATK gear. That and it’s really great for Pecil with Sentinal. I really like Pecil so any excuse to use him is a bonus

Next ArticleDiablo III Season 5 and FFXIV