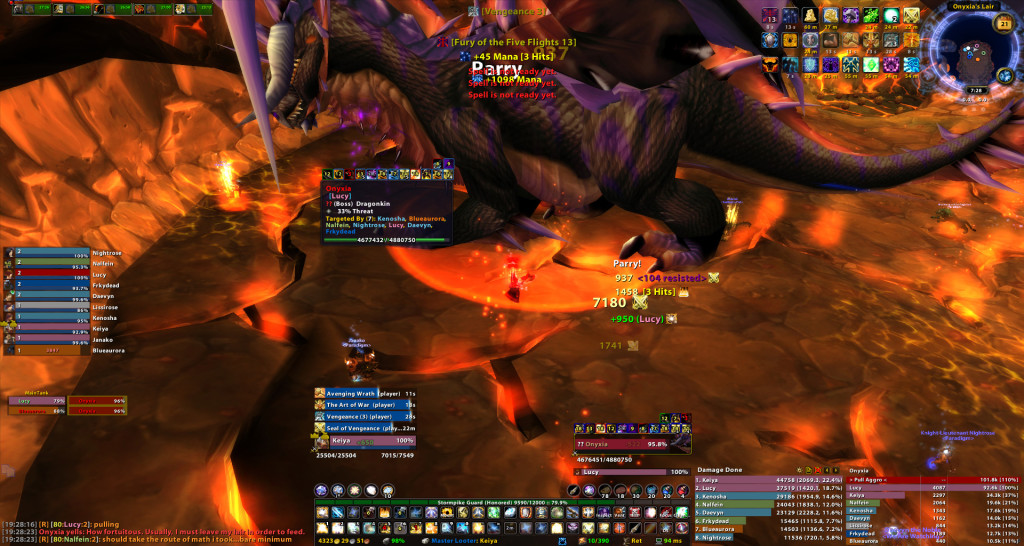 Regarding my posts on PuG raid leading: On second thought, disregard any of the strategy explaining advice and just tell people to heed Mortigan the Lock’s rules on how to raid anything. WoW blog post of the week, I lol’d. But seriously, is it really that difficult for people to not stand in a fire?

I think I’ll make more of an effort to blog regularly; Regularly being defined as once a week-ish. So without further adieu. rambling time! AKA non-cohesive bits typed past midnight. All of my daily computer and WoW playing is done in a dual screen setup. It’s great for multitasking; I can raid and watch stupid YouTube videos at the same time! But lately my right monitor, which is a 4 or 5 year old 19″ LCD, has been slowly taking longer and longer to warm-up. It took 5 minutes at the beginning of last week, which was annoying but tolerable because I could just go make a cup of coffee and read something in the mean time. 15 minutes was pushing it and 1 hour meant a trip to the nerd goody store.

So anyway, I replaced it with a 24″. It’s not really that much bigger, but I’ve noticed a reasonable increase in environmental visibility, which helps with the aforementioned task of avoiding circles of fire and keeping an eye on where everyone else is positioned duringcertain encounters. I remember raiding on a setup like this, viewing the game through a small box in the center of the screen. That’s the cleaned up UI too, I ran with a few more items on my screen during our Molten Core phase.

Both monitors are in widescreen format, but for some reason the new monitor has a slightly different ratio. Just different enough to force me to reposition half of my user interface elements. I think it’s about time to redo some of my UI anyway; Primarily upgrading to Pitbull4 and finding a replacement forFubar since the project went perma -dead (I think No Stock UI has an article on that). I guess I’ll make another Keiya’s UI post at some point. I’m pretty happy with my general layout though, so I doubt I will change much.