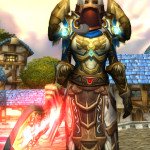 I have a couple of things that I want to post about within reasonable time when I’m not so real life busy. So, this is my late October and Early November tentative post schedule: Keiya’s New Raiding UI Version 3.2, Dabbling withAion and Borderlands for the PS3. I might do a CD review in mid to late November because Them Crooked Vultures is releasing an album on the 17th of November and well, I’m a pretty big fan of Dave Grohl.

I impulse bought Aion a couple of weeks ago. I was actually going to do a thorough review and state of the MMO industry post once I had a chance to properly delve into it more, but I have kind of already lost all interest in it. It’s a fun game, but I just kind of got…busy/distracted and set it down. If I’m really bored and game deprived at some point in the future, I’ll go poke at it when I’m not on WoW or doing other things. Borderlands is an interesting game that was just released for the consoles. Think Fallout 3 + Team Fortress 2 + Left 4 Dead. Having fun with it so far.

So I redid my user interface yet again, mostly to switch over from Fubar to ChocolateBar, from Pitbull 3 to Pitbull 4 and from Bartender 4 to Dominos. I also wanted to consolidate the functionality of a few of my addons. My previous setup had a quite a bit of redundancy. Aside from some window shuffling, it really doesn’t look that different I guess. I’m liking it so far though. I don’t know why I do things like this to myself. Redoing your UI is a giant pain in the ass. I spent all of yesterday evening half-assed running battlegrounds and poking shit mobs to make sure that every little element was exactly where it should be.

I was in 25-man Trial of the Crusader last week (well and tonight I guess) when my computer started dropping below 10 frames per second during most of the counters. The resolution increase on my new monitor in addition to the fact that this machine is getting ass old probably doesn’t help. I’m thinking that it’s probably time to start building a new computer. I made the mistake of goingel cheapo on a CPU with a low upgrade path. I think this time I’m going to budget more towards building a nicer machine.