I really like the shared topics concept over at Blog Azeroth. Interestingly enough, the last (and only) time I have posted one was a little over a year ago about WotLK release speculation. Anyway, I have actually been meaning to post about this one for some time. A while back, Penny Arcade posted this comic which sadly reminded me a little of my own uuuh situation. For context, here is a screenshot of my bank inventory: 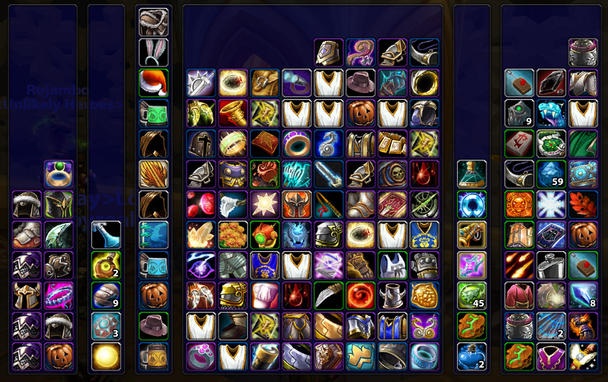 It used to be worse and doesn’t even include crafting materials and raid consumables, which I now keep on one of my banker mules in a slightly more organized state. I don’t really even know what half of this stuff is anymore, though I have a strong inkling that most of it needs to be disenchanted or deleted. I tend to do that on an item by item basis as I run out of space. Oh, my ArkInventory rules got messed up. At some point they just need to be deleted and redone.

The guild bank (not pictured) is far worse. You see, it used to be fairly organized before a round of account hacking that went down a couple of months back. Someone with access got compromised and the bank was cleaned out. A week later, the same thing happened to a lesser extent. Thankfully everything was restored and returned, but they were all returned to my mailbox. I wasn’t exactly a on the ball about keeping it organized in the first place. So that’s karma I suppose.

[item]Skullflame Shield[/item]: This shield was my first epic piece of gear ever. I think. It was either this shield or the banana shoulders, I’m not sure anymore. It was a gift from a real life friend and still one of the coolest looking items in the game. The proc was decent back in the day iirc. [item]Glimmering Mithril Insignia[/item]: This trinket was the reward for completing a fairly annoying series of blacksmithing quests. I think it required a total of about 200+ mithril bars to complete. Old world spawn rates coupled with constant node camping made this such a pain in the ass to obtain. It is a testament to time spent ore farming. [item]Lawbringer Spaulders[/item]: I disenchanted my original banana shoulders at the beginning of the Burning Crusade in an attempt to free up bag space and regretted doing so. A couple of months back I went along on a Molten Core fun run and reacquired them. Alas, all is well in the world once more. [item]Commendation of Kael’thas[/item]: I wanted this trinket so bad in the Burning Crusade and never received it. A while back a couple of guild members were on a mount farming bender and were running that 5-man quite frequently. It finally dropped. [item]Jin’rohk, The Great Apocalypse[/item]: I leveled with this for much of WotLK. I will disenchant this word when an I get an even bigger and more awesome looking troll sword. I just, can’t bring myself to dump it. Not just yet.

I have a handful of old school raid items that I am reluctant to throw out: The Onyxia attunement necklace, the Dire Maul fire resistance trinket, the Onyxia cloak, the Molten Core water and a couple of other things. A good portion of my bank though are just tabards, fun trinkets and funny hats. I mean, literally every single funny hat and funny trinket that I have ever come across during my 5+ year journey around Azeroth. I would just kill for a vanity head slot. I mean, I should be able to raid in a chef’s hat without incurring the wrath of my fellow team mates.

Bonus: Here you all go, my inventory, which is somewhat messier than usual because it includes all of the stuff that I haven’t DE’d yet from ICC as well as some loremaster crap. I found this post from two years back. ArkInventory makes it soo sooooo much easier to sort through junk. I keep receiving odd error messages from it though. I have a feeling that I either need to start from scratch and redo all of my rules or just look into another bag mod.

I seem to be low on potions and flasks