This morning, for the first time ever, the Final Fantasy XIV updater actually worked. As in, I was able to download and install the patch as intended without having to resort to megaupload mirrors linked on forums. Rock on! Anyway, there is something that I find visually unappealing about the way Limsa Lominsa looks and is laid out. For whatever reason it just feels sterile to me or something. 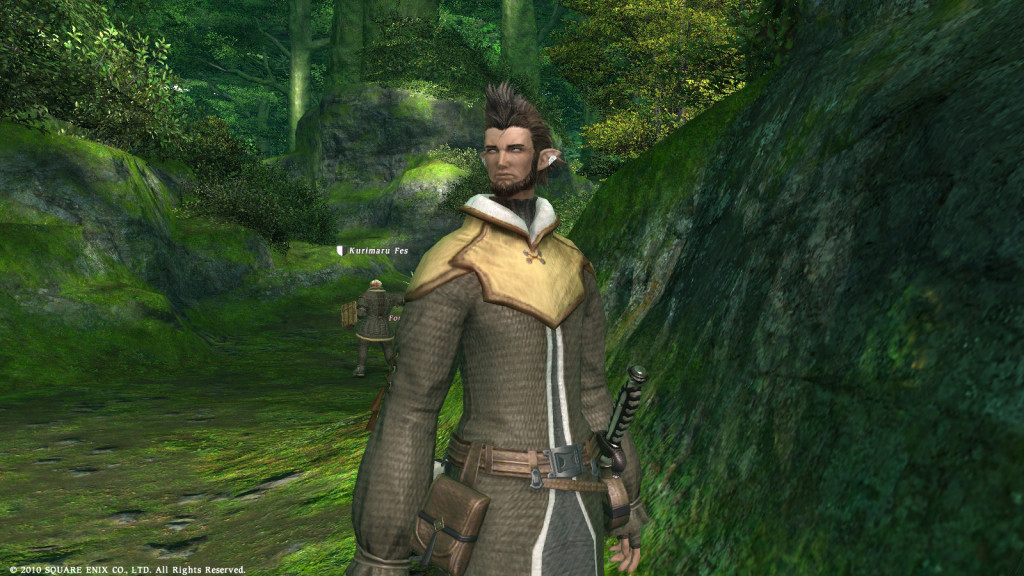 So instead of continuing in that zone, I rolled a new character (pictured to the right) in Gridania. The city itself, set in the midst of a lush green forest, is comprised of crafted wooden structures interwoven with the natural environment. I suppose every fantasy MMO needs its “elven” city so this would be it. Gridania’s layout is fairy straightforward: It’s roughly a circle with a couple of offshoots. There’s still an ungodly amount of running between one end to the other, but I think that it is easier to navigate than Limsa Lominsa’s multi-tiered spread.

The Gridania Rank 1 quest line, “The Color of Sin” is a personalized linear story that is very single player Final Fantasy-esque, integrating short cutscenes with gameplay and dialogue. In pure MMO mechanical terms, the gameplay itself wasn’t too interesting; You run around between NPCs, you talk to people, do an escort quest and kill a few things. That’s pretty standard fare, but I really like how the entire quest line is packaged together. Overall, it succeeds as a narrative and at retaining the overall feel of the Final Fantasy franchise.

As a part of this quest line, after quite a bit of NPC bouncing, you are eventually told to head to the growery. At this particular location you are tasked with learning a dance from a group of 6 children in order to partake in a ritual. In order to learn this dance, you must talk with each child and perform a specific emote based off of a text clue. I think this part of the questline would have been less frustrating if the hints had made more sense (mistranslation?). I had to look up a few of the answers or copy the other players around me, who also looked just as confused based off of the frustrated emote spam. By the way, if anyone needs them, here are the solutions: 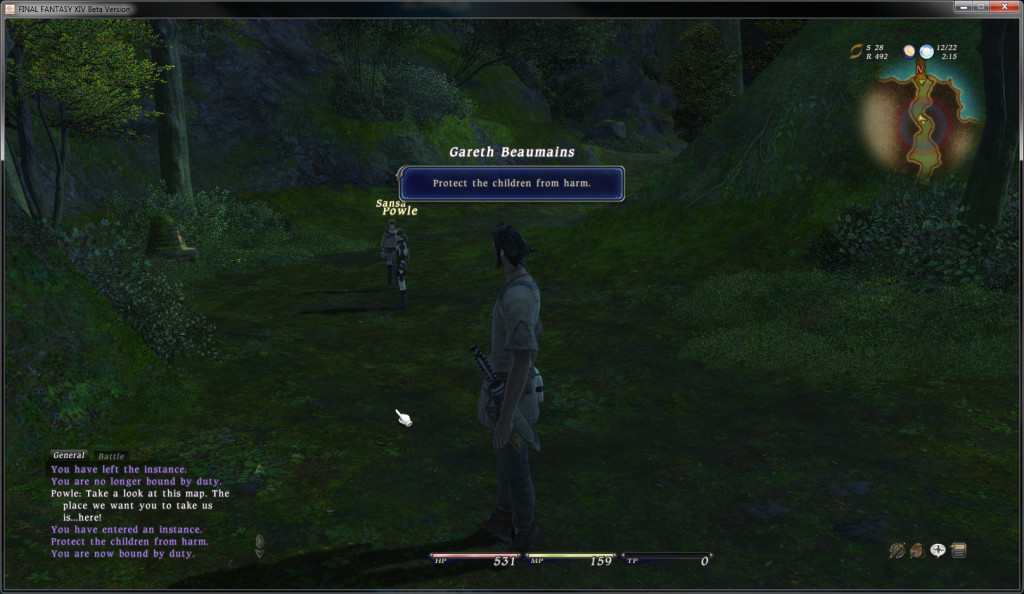 In exchange for these “dance lessons,” you must escort two children into some forest grove. The escort quest functions much like any other MMO escort quest. You must stay near the children (bounds are represented by the red circle on the minimap) and you must not let any harm come to them. The NPCs aren’t on rails, they use some sort of pathing algorithm which is alright, just a little different than what I am used to.

I would love to play more storyline quests like this one. I hope that Square Enix is majorly holding back because after finishing “The Color of sin,” the next storyline quest doesn’t occur until you hit rank 10 (the one after that being at level 20 and so forth). Inbetween story quests, at least to my understanding, you grind on guildleve quests which are generally uninteresting. I mean, if the entire leveling structure was mostly story quest based, that would be pretty bad ass. At the moment, content seems way too sparse and bizarrly paced. But then again, Square Enix did say that they were holding a few things for release day.

Out of curiosity: are there any keybindings in this game or is there a way of at least macroing certain items? Since the menus are so slow and nested, I would like to be able to access as many things as possible with the keyboard. Ideally, ‘r’ for example should allow you to respond to tells, ‘j’ should open the quest journal and so forth. Doesn’t FFXI have default keybindings for most menu items?

Next ArticleMementos (aka WoW Hoarding)