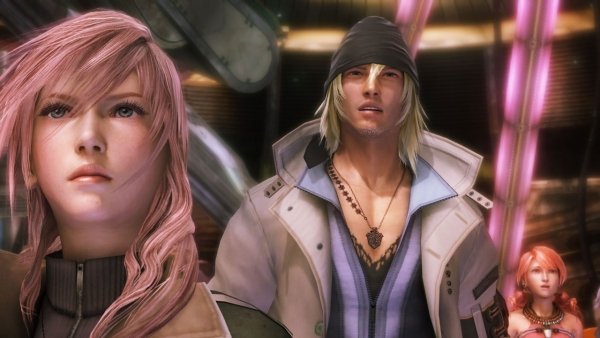 Whoops, this post (which has been sitting in my temp stack for two months like well all of my posts) turned into a mish mash rant of sorts. So a history first: A close elementary school friend actually introduced the Final Fantasy to me while we were in day care or something. I had received Final Fantasy I as a birthday or a Christmas gift that year or something and it was the most awesome thing evar. I actually fell in love with the series in high school/early college. That is when I more or less ultra binged on 6 through 8. I have Final Fantasy VIII wall scrolls, posters and action figures burried somewhere. My dorm room was like a shrine…

You will either love or hate Final Fantasy XIII; It’s just one of those divisive games, granted most opinions seem to lean towards the hate side. There’s a fine art to tutorial balancing that Square Enix obviously does not understand. At all. I mean, a 15 hour long tutorial, really?

But past the slow start, both the story and gameplay pick up quit ea bit. If you find the game boring initially, it is. Just grin and bear it. I am actually having a lot of fun so I will take back most of the nasty things that I was originally going to say. I take that back, this game is such a grind: Grind grind grind, short movie, grind grind. Uninspiring and cliche anime characters, bland dialogue at best (grating at worst), standard JRPG story. Final Fantasy XIII isn’t even much of an RPG anymore, it’s a bland action game without the part with the action fighting. What the hell happened?

Massive criticism aside, Final Fantasy XIII is an interesting addition to the longstanding series because it marks a very clear way in which the developers perceive the series. Quite a few gameplay and design changers were made, some of which paid off. Overall, the package fails to deliver as a whole.

So here is problem number one: While the pacing is very consistent and while enemies are fairly well placed, it is still such a huge grind. There is a huge emphasis on the combat system, which I like to some extent. The paradigm system is very fast paced and forces you to swap roles rapidly on many occasions.

In fact, the paradigm system would have been awesome if it wasn’t dumbed down. The auto attack button effectively allows you to spam ‘X’ 90% of the time. There no more random battles, and fewer enemies, which are strategically placed along your journey.  But to make up for that, some of the trash pulls are just so long. They aren’t even fast paced fun trash battles. It is as if all they did was jack their health pools up by a factor of 10. I mean, if you really wanted to, it really isn’t hard to use the pathing system to avoid most enemy encounters. But if you do that too often, your characters will be so far behind the ‘leveling’ curve (if you can even call it that), that future encounters will be near impossible. You are fucked if you do and fucked if you don’t.

So back to the pacing: Final Fantasy XIII is a very controlled experience, obviously paced with calculation which is a huge change over the traditional, wander around town, hit dungeon, wander around town paradigm. It is also shamelessly linear, which on the plus side eliminates the forced exploration. Let’s face it: All RPGs are linear, Western games are just better at hiding it. The pacing is too consistent. I miss the cliche RPG towns. Towns provided a good break in the grinding and also provided a different method of exploring character development in a more casual setting. Final Fantasy XIII is effectively a string of dungeons taped together. It is…a never ending grind, boss, grind, boss pattern.

The characters story and dialogue feel watered down. It’s not that bad per se, it’s just that at the time I had first picked up FFXIII, I had just finished playing Mass Effect 2 and before that, Dragon Age. So silly spoiled me just expected all RPGs to have decent-ish writing and dialogue or at the very least, engaging gameplay to make up for the lack of writing and dialogue.

JRPGs are feeling very tired as a genre because they haven’t changed or evolved all that much in the past decade or so, especially when oyu compare them to what other RPGs have to offer.  But to be fair, I have pretty much outgrown this genre. It’s clearly designed to appeal to a demographic that does not include myself (not a teenager anymore).

The gameplay changes are interesting but not ‘interesting’ enough to sustain the genre in my opinion. JRPGs are feeling tired, they haven’t changed much. Especially when you compare them to what Bioware has to offer. But to be fair, I think I’ve just outgrown the genre. It’s clearly designed to appeal to a demographic that is not me (not a teenager anymore). Square, I commend you for making an active effort to change the series but WTF.

On the plus side: The sky production as expected is super sky high. I mean, that game is gorgeous and some of the cut scenes are a real treat to watch. Well the good thing about it being super ass linear is that when I pick it up again in like, a year after feeling kind of bad about paying $60 for a game and not finishing it, I probably won’t feel lost to the point of having to restart the game.

And, sorry Kotaku: I totally just plucked your screenshot (which probably is just a stock image from a press release) off of Google Image because I was too lazy to take my own.