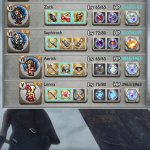 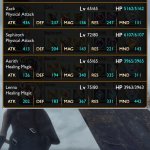 This one was harder than I had expected, given the number of Soul Breaks and the amount of record synergy that I have for FFVII. I think above all, hastega would have been a great help. Bahamut’s overall damage output wasn’t nearly as bad as previous Ultimate fights, but burst damage is necessary to kill the Giga/Petraflare bars in time as well as nuke him down. I guess I was lucky and paced the fight just enough to spawn/kill 8 dogs without taking too many extra actions. I did lose a medal for actions taken but managed to just make the cutoff for champion.

Try to delay using the first Sentinel’s Grimoire charge as long as possible. As long as you get Protectga and Shellga up ASAP, the dogs are easily survivable without a wall. I ended up popping SG after the first Gigaflare and then again when he was between 40% and 50% health. Also, Petraflare is survivable with Shella, Wall, and full-ish HP. I had the misfortune of eating a Petraflare towards the end of the fight. Luckily, wall was still up, everyone was topped off, and an AoE heal was on standby.

Bladeblitz, Fire Blossom, and Ifrit were obviously used to AoE down the dogs. Blade Beam and Planet Protector were paced and kept in reserve for Gigaflare and Petraflare (with the added bonus of AoEing down the dogs).

The real MVPs of this encounter of course being: Planet Protector boosted Blade Beam and Air Strike. Air Strike doesn’t do that much damage but it does have a 100% chance to stun all, which was great for stalling Bahamut for just long enough to kill (most of the) the gigaflare and petraflare bars (why is Zack’s weapon a glove of all things?). Blade Beam, as always, is great for burning down just about everything.