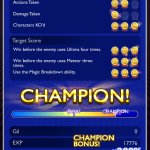 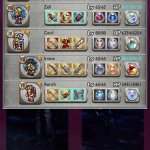 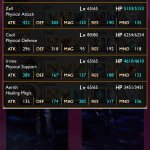 One shot. If I had to rank bosses, I would have to say that Adel was easier than Maduin, who at least had a gimick. Adel was pretty just 100% physical DPS brute force. Since she deals out 100% magical damage and punshes magical damage with a drain counter, not a very hard party to compose. Continuing with my glove curse, I pulled yet another 5* glove during Banner #1: Gauntlet. It has an okay Soul Break (3*171% single target physical hits with haste/protect/shell) but for a B-List mediocre character. Decent enough damage with Synergy + Lifesiphon + Knight’s Charge though.

Shellga + Full Break + Magic Breakdown + Sentinel’s Grimoire effectively neutered Adel for most of the fight. In summary: Set up mitigation as soon as possible, build up your SB gauge, reapply wall/shellga at about 50% health, then go to town with SB/SSB spam. As always, Planet Protector + any multi-hit SB with a decent multiplier is MVP this fight.

Adel’s AoE spam duirng the weak and very weak phases of the fight still hurts with full mitigation (around 1.3k damage or so to all characters). I didn’t find it very hard to single target heal through and it shouldn’t be a problem as long as you can burst her down.