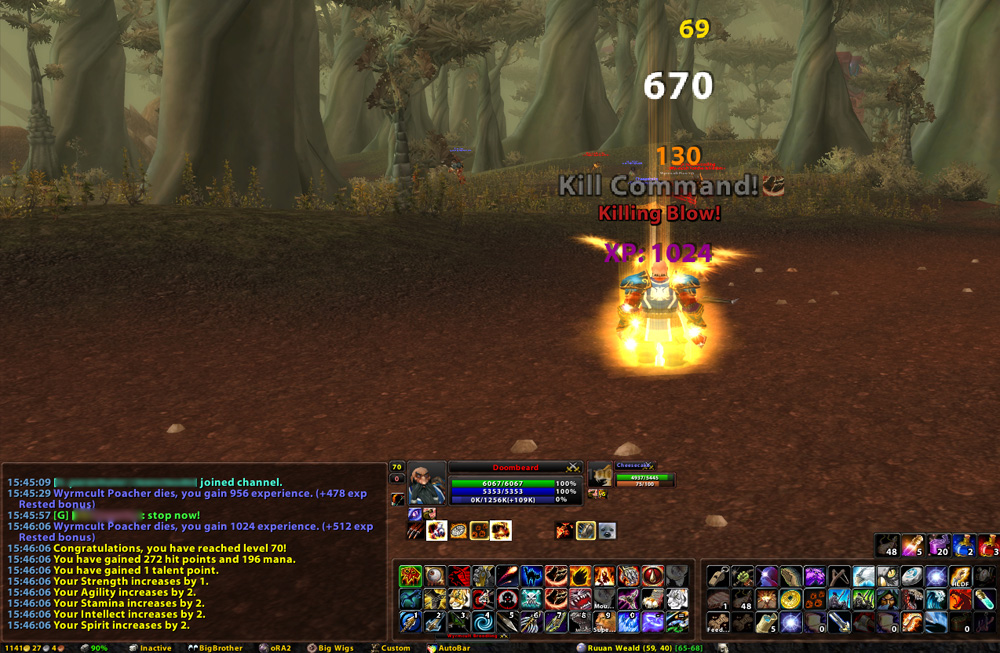 At long last Doombeard the huntard, my one and only high level alt character is 70. It only took one and a half years to get him from 60 to 70. But, better late than never! He’s not a new character; I rolled him approximately a month or two after I had rolled Keiya way way back in early Vanilla WoW. He gets played in short bursts. I’m not really all that much of an alt whore.

So is at 360 mining now, 365 with the glove enchant. I can trivially reach the cap tonight. Ore farming is a lot easier with a flying mount. His alchemy is stuck at 300. The original thought was to make him Keiya’s pot bot. But, since I don’t have a character with herbalism and since it’s not like my guild is short on alchemists, that’s kind of pointless. I may pick up a secondary gathering skill instead for $$$.

Doombeard’s one and only pet is Cheesecake, a Swap Jaguar from the Swamp of Sorrows, tamed when I was in the low 30’s. Before Blizzard normalized the pets, his tamed attack speed was at 1.2 the second fastest in the game. the fastest being Broken Tooth, a cat from the Badlands with a former attack speed of 1.0. I had thought about taming him but couldn’t catch the spawn, he’s rare. I will tame either a Devilsaur or a Core Hound come WotLK. I’m leaning towards Core Hound for the nostalgia factor. Cheesecake will always be my favorite though.

My hunter’s gear is utter ass, aside for his Stalker’s War Bands, acquired 6 months ago LOL. WTB welfare epikz.