The original Deus Ex is legendary, it represents a turning point in gaming, offering a depth of gameplay, a scope of vision and a story telling method not seen in a medium of this type until that point in time. It is widely considered to be one of the best games ever made by myself and many other players. To say that Deus Ex Human Revolution has a lot to live up to is an understatement; I mean, how do you live up to the greatest game of all time? TL;DR: This game is a lot of fun (I’d say in my top three for this year: Portal 2, Witcher 2 and Human Revolution). It is single handedly responsible for me going to bed past 2am for an entire week, thus doubling my caffeine intake.

Deus Ex’s “flavor” has always been that of variety and Human Revolution is no exception. The gameplay is fantastic and pretty much, exactly what I had wanted from this title. I really love games that offer a flexible range of experiences, particularly if there is a strong stealthing (straight up shooters are a dime a dozen, but stealth, not so much). I liked the first/third person hybrid gameplay. Though initially awkward to use, it worked out well in my opinion. Holding the right mouse button while behind cover will switch to a 3rd person view of Adam. Tapping and holding the space bar allows you to respectively roll to a new cover spot and round corners. You also have the option of blind firing. It is a good solution to common cover problems and works a hell of a lot better than repeatedly leaning to peek around corners in first person view. 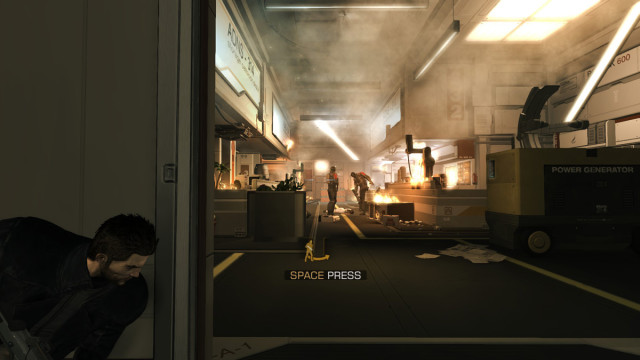 As expected, Human Revolution provides a multitude of options for different gameplay styles. Players with a more subtle touch won’t be forced to kill people if they do not want to. Similarly, if you aren’t into hacking and sneaking, brute force works as well. Just about every single point in the game offers an alternative route for all play styles; All of which feel rewarding in their own way. I never really felt like the game was punishing me if I chose one method of advancement over another, and that’s important. There’s also fair room for more creative solutions. So if you want to cheese an area by spending an hour stacking crates or methodically collecting turrets, nothing is really stopping you.

The shooter aspect of Human Revolution feels fairly average and the mouse controls were reported as being laggy for some folks (the patch corrected that issue for me). Also, I didn’t really like the take down animations. They were somewhat repetitive and awkward in the sense that, the game switches camera views every single time certain abilities were performed. It kind of broke fluidity. Otherwise, the normal flow of the game has a good rhythm.

There are a wide variety of augmentations available supporting the many styles of gameplay as mentioned above. As you play through the game you acquire experience for doing certain activities (killing, hacking, tranquilizing, etc etc). When you acquire enough experience, you level up and are rewarded with one Praxis Point to be used towards the redemption of various augmentations. Praxis Points may also be purchased for 5k credits from LIMB clinics. The Praxis Points really aren’t that widely available, so you have to pick and choose carefully between upgrades as you progress through the story. 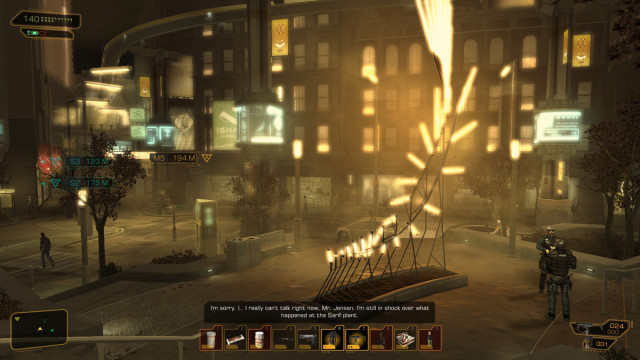 This point is kind of a nitpick but: Many of the augmentations felt a bit oddly placed to me. It is really easy to minmax out certain skills relatively early on in the game, trivializing certain challenges. Also, the energy bar upgrades were fairly useless seeing as how you can only naturally regenerate one bar. Since the candy bars were relatively rare I was reluctant to use them. Overall, the extra energy bars were only used at very few points in the game.

The hacking minigame, for once, was actually pretty fun. Though to be honest, it got a little old by the end of the game seeing as how I obsessively hacked just about every single door and every single computer in the game. The fact that the game does not pause when you hack adds a bit of urgency. You have to be quick or thorough enough to make sure that all of the guards along that pathing route have been accounted for (vending machine fort worked pretty well lol). Otherwise, you will be caught and shot at.

On top of that, it’s a game of risk versus reward. Without going into a long-ass explanation as to how the hacking actually works (just watch a YouTube video or something), most of the hacking screens have optional datacores that will yield extra credits, sensitive information or hacking goodies (stop worms and nuke viruses). Attempting to grab the datacores greatly increases the risk of you getting caught and also takes a bit more time. 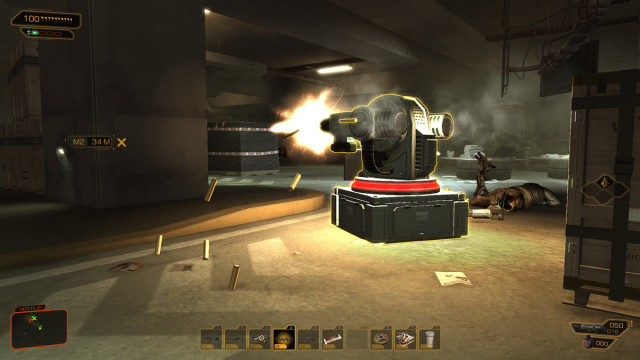 Human Revolution has two main weak points: One, the boss fights and two, the cut scenes. Both elements to say the least feel like relics from the past. It’s also worth noting that the load times, though GREATLY improved after a patch are still plentiful and fairly annoying (especially for quick save abusers). But combined, these issues interrupt the game’s rhythm.

I will just outright say it: The cutscenes are god awful and distracting. What was the point of doing that and what was the point of pre-rendering them? The clips are short, about 30 to 60 seconds on average and usually occur towards the beginning or the end of a main quest sequence. In otherwords, you get a crap ass movie at every single pivotal point in the game. To top it off, not only does the game steal control away from you during these critical moments, but it completely abandons the game engine in favor of cheesy looking poorly rendered video

There are good boss fights and then there are bad boss fights. As I see it, boss encounters should feel like a natural climax to a storyline or a chapter; It should be meaningful to the game’s storyline or at the very least, original in terms of gameplay. The problem with many many boss fights is that they feel artificial and detached from the main narrative. They feel like an arbitrary and somewhat irrelevant end level challenge for the sake of having an end level challenge and not because they really belong there. That is my real issue with boss fights.

The boss fights were an interesting choice for Human Revolution, especially for someone who chose to play most of the game as a 100% stealth run (most lol). And especially since, if I recall correctly, the first Deus Ex offered non-lethal options or ways of avoiding boss encounters (I could be wrong, it has been over 10 years since my last playthrough). On one hand, they offered a change in pacing. On the other, I didn’t really like being forced into lethal action, though that my have been the point. It would have been awesome if the encounters offered a stealth objective or something more creative than running and gunning. It was particularly awkward seeing as how I had skilled most of my points into stealth and hacking. 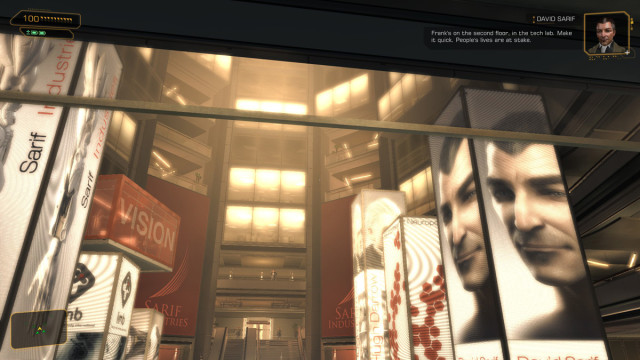 I really liked Human Revolution’s graphics from a design standpoint. It is a stylized game, as in, not meant to be photorealistic like Crysis. The limited color palette keenly depicts a cold and narrow world. Frequent use of gold and black contrasts and accents important parts of the game (along with read and white serving as highlights). The colors  also tie the game together as a central theme: Gold represents the golden age of cybernetic research whereas black represents its dystopic side. Revolutionary advances in biotechnology stifled by socioeconomic strife.

Some people don’t like limited color palettes (another “brown game), but in this case its fitting and represents good use of the intentional color palette limitation. After all, it’s not as if the dystopian near future is going to be painted with happy rainbow colors. From a technical standpoint, Human Revolution has several problems. First of all, as detailed as the game is, some of the texturing and shadowing do not look very good at higher definition. The overall city scenes, interiors and overall designs look quite nice, but some of the details, not so much.

Also, many of the character models look sub-par (screenshot comparison). For example: Compare anyone from the main cast (Adam, Sarif, etc) with less important characters. Some kind of don’t look too good to a distracting degree. The facial engines or lack thereof are notably rudimentary. Most of the soldiers, civilians and other non-main characters are grossly reused. It wouldn’t have hurt to include a bit more variety. Overall, nitpicks and what not aside, I was happy with Human Revolution’s art direction and style. It’s an overall very slick looking and well designed game.

To be honest, I was a little disappointed in the choice system. The Witcher 2 had spoiled me so I set my bar rather high. Along the sliding scale of choice systems, Human Revolution feels like it lays somewhere between The Witcher 2 and Mass Effect. It’s not bad or anything, but I really wanted the ending of the game to feel like the culmination of all of the choices that I had made throughout the game. I did not feel that was achieved. But that said, I was comparing game stories with several folks and was very very surprised at exactly how different each person’s game experiences were. May mission outcomes and game reactions are a direct result of your choices and actions.

(First mission spoiler). I didn’t realize that the hostages in the factory could be saved because I was never presented with that objective. So lo-and-behond, post action everyone in Sarif was pissed at me and I did not understand why. I mean, sure I didn’t save the secretary, but she had a gun pointed to her head. I did the best that I could given the urgent situation! You all are dicks! I did not realize that if you dick around headquarters for long enough, the hostages would be executed. I had been so damned focused on rummaging through emails and stealing shit that I had kind of blown off David Sarif’s irate message. My bad. Actually, to best honest, I had assumed that the hostages were scripted deaths. I made a point of saving everyone the second time around.