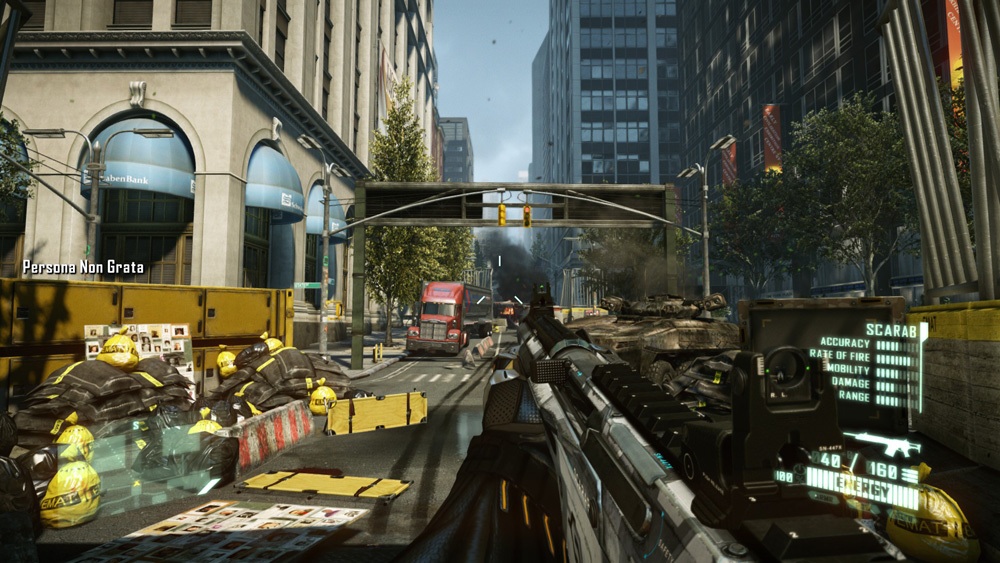 At first, I didn’t have that much interest invested into Crysis 2. But, it seemed somehow wrong to purchase a shiny new video card and not buy the premier game for shiny new graphics. This entry was originally just going to be a short afterthought on the game, but I found myself enjoying it much more than I had expected; So there you go. Now, keep in mind that I have not played the first Crysis game beyond what was included in the demo. Even so, all I really did was run around punching chickens. Crysis 2: Y U NO AUTOSAVE?? Seriously.

Crysis 2 is a good shooter. If you like first person shooters and don’t mind spending a bit of cash, you may as well buy it. The multi-player component is a blast and it has a solid campaign of a reasonable length (in other words, it’s not pulling a 4 hour CoD special). If you don’t enjoy FPSs well, this game probably won’t change your mind. The overarching story is decent, but it’s not a literary masterpiece and the voice acting/dialogue was tolerable at best. I wouldn’t say that any of the characters or story elements were particularly engaging or memorable. It’s not a bad story per se, it’s just that the pacing and execution feel fragmented: There were many chapters that didn’t stitch together well or were segued with a cheap loading cut-scene. There were also way too many, “suit is failing, Alcatraz is half dead, load new area, wake up and start shooting” sequences. I swear that happened at the end of every major plot element.

Crysis 2’s gameplay is very flexible; I wasn’t expecting that to be the case and was pleasantly surprised. If you want to pick people off with a sniper rifle while safely tucked away, you can. if you want to stealth around and stabify enemies in the neck, you can. If you want to go balls out shoot-em-up style, you sure can. And, if you want to just throw shit at people with super strength, you can do that as well. There are a lot of options. My personal preference tends to lean on the sneak and snipe side of life; so I always appreciate first person shooters that offer a comprehensive stealth experience, since they seem to be few and far between.

All of your abilities draw from the same power source: Your suit. You may swap between different gameplay “modes” as they are all tied into nanosuit abilities. You have enough energy to do quite a bit, but it’s still very finite. If you move around too much while stealth, your energy will deplete fairly rapidly. The same is true if you get shot up too much while in armor mode and so forth. It forces you to analyze the situation and think about your next course of action. There’ seven a tactical view display that will display various options that are available to you.

The graphics on the PC version, obviously, look pretty kick ass. If you like this genre, have a PC that can run high end games and have even an inkling of an interest, just buy this game now and play it before the graphics go out of style in a couple of months. It looks great and it’s fun. I will admit that a not-insignificant portion of my enjoyment came from gawking at how good it looks. It’s not even the graphics too: The environments are amazingly vibrant and detailed. Crysis 2 is a linear game but, there’s enough of an exploration element where I didn’t feel trapped on a rail.

The downside is that, there  are a tragically limited number of things that you can configure from the options menu. What the fuck. All graphics options are limited to one slider. If I am playing on my computer, I want the ability to fine tune the game’s graphical settings from within the game client itself. I shouldn’t have to resort to editing config files just to enable/disable shading and fov options. Not cool. Also, the DX11 carrot keeps being dangled every other day. I know that a patch is being promised, but I haven’t seen it yet. So, I guess I will have to wait.

Next ArticleChests and Junk Everywhere (Another Minecraft Rant)