Analytical and Deeply Immersed (and Stuff) 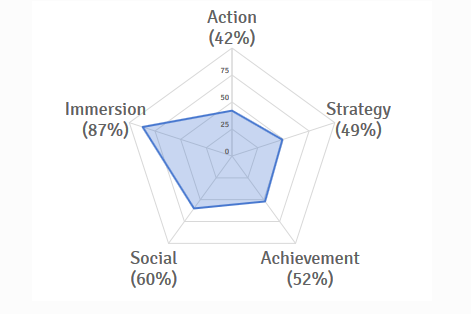 There’s another one of those gamer profile quizzes and floating around. This one seems fairly accurate-ish given that my absolute favorite gaming genre is fantasy role-playing (and MMO by extension though not so much as of late), with general action/strategy/FPS games trailing closely behind in second place. Above all I appreciate a decent character story and well, swords and guns and stuff.

It’s been a fairly light gaming week. In the wake of finishing The Witcher 3 (aside from the second playthrough that I poke at now and then), and thus not really having anything that I feel like playing, I have once again picked up The Sims 4 and started another stupid legacy story thing, continuing with the same family line as my original legacy story which was completed, but “lost” during a website migration. I still haven’t bothered playing or downloading either of the two games that I purchased the other week during the Steam sale. I think I will try to make a point of doing so in the upcoming week, so they don’t end up in the ignored bin for all eternity.

I keep reading about Heavensward in my blog feed. It’s very tempting to pick up FFXIV again, but I have a sneaky feeling that i should at the very least, wait until the initial login rush has passed.