I really like the way the Keeley modified DS-1 sounds in comparison to the stock pedal, which is what I have. There is an option on Robert Keeley’s website to mail your pedal in to get it modded, but that costs $75, not including shipping (stock pedal costs around $35 retail). The exact instructions are posted online though. So, as I can find a place to buy specific capacitors/resistors, it in theory, shouldn’t be that hard assuming that I remember how to solder without setting my hand or other objects on fire.

5 ass-random things that have occurred or I have thought about within the past couple of days: 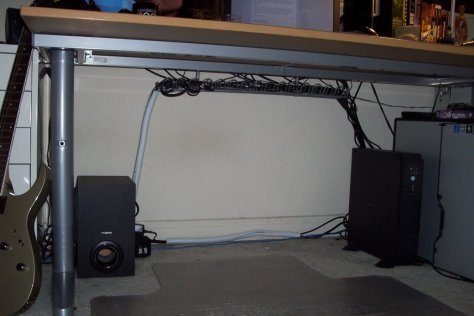 The Signum cable management rack from Ikea is the best thing ever. I finally got around to installing it and rerouting most of the wiring around my desk. No more dangly cables everywhere, huzzah! I need to do a better job of sorting out cables and tying off slack.

It would be nice to route some of the power cables near the wall socket around my desk leg so that they remain hidden. Unfortunately though, a few are short. I might try to prop and tie the power strip to the rack. Not sure if the giganormous power bricks will fit though. I Also bought a drawer unit to store all of my stupid USB cables, device chargers, guitar cables, PlayStation controllers, adapters, etc and any miscellaneous junk laying on the floor.

Happy umm June! I had five or so half-completed entries milling on Google Docs for two months. By the time I got around to editing and reviewing them, all were out of date/irrelevant; Meh. Gaming stuff:

Workspace obsession
My living space is becoming a dump. I’m on a small quest again to organize it but I cannot find office furniture that fits my exact needs dimension wise. Everything is either too wide, too tall, or does not match. I want a relatively narrow drawer/filing unit. No wider than 12″ & no taller than 27″.

This one from the wonderful world of Ikea might work. I very badly need more storage space to organize guitar cables, charging cables, USB cables…Everything at the moment is on the floor.

Gear: Swapped the Chess Event tanking sword for the Amani Punisher from the eagle boss in ZA. Also replaced my shoulders, boots, belt, and cape (think I already posted about that). I almost blew all of my badges on the Chestguard of the Stoic Guardian a day before the new 2.4 rewards were announced. Need: The 2.4 tanking chest, the 2.4 tanking ring, Jan’Alai’s shield, and Malacrass’ Helm. I need to replace my gloves at some point, but I haven’t researched a suitable replacement. It’s a little odd but, I’m having a little trouble staying above 490 defense on my want list. I keep swapping it for other tanking stats because many of the pieces that I “need” don’t have any def.

Other Stuff
Gasp, I have a new hobby that doesn’t involve the computer or any other nerd paraphernalia! I bought an electric guitar/amp/etc in January and have been learning to play it. I devote around 1 to 1.5 hours a day to practicing and learning music theory (less on Friday and Saturdays, ie raid nights). It’s fun!

I will try to update more!

I have some WoW pics from brewfest, tips and other such musings for another post either tonight or tomorrow. I haven’t done a general interest/review post in a while.

Oh, so November is NaNoWriMo. NaNoWriMo (National Novel Writing Month), for those who haven’t heard of it, is a creative writing project that challenges participants to write a 50,000 word (175 page) during the month of November. I have always wanted to participate in it, but could never find the inspiration or time to write that much every day for a straight month. I might actually attempt to this year or at the very least: NaBloPoMo. I imagine an undertaking of this magnitude requiring vast amounts of alcohol (home) and caffeine (work).

Television
Normally, other than a few old standbys, I don’t bother watching many if any new television shows unless it features a spaceship or men in armor :P. I actually bothered watching a few of the new shows this season.

Bionic Woman: It’s a re-imagined version of the original series done by the same person who did Battlestar Galactica. I was somewhat disappointed with the pilot because I semi-expected something with the depth of BSG. I don’t really like the protagonist, the special effects where cheesy, and the show/plot was pretty average overall. It is though, difficult and unfair to judge series based off of the first show, so I will continue watching it (given that I don’t blow it off for WoW). Oh, it has Starbuck in it.

Reaper: Two thumbs up for being funny and interesting. The pilot was after all, directed by Kevin Smith. Continuing from last season: Stargate Atlantis, Heroes, Lost (February lol), Battlestar Galactica (4th and last season, I think it starts in November?).

Music
The new Foo Fighter’s album “Echo, Silence, Patience, & Grace” was released late last month. I was to be honest, a little disappointed at first. But as I listen to it I am enjoying ESP&G more and more. It’s just one of those albums that you appreciate over time. I am really digging it at the moment. ESP&G is a good listen, offering a fairly wide range of genres and sounds that flows easily from one track to another. It’s not a black and white, “quiet side and loud side” album ala In Your Honor. Favorite Tracks: The Pretender, Let it Die, Come Alive, Strange Things Have Happened.

The new Radiohead album, In Rainbows is slated for release on the 10th of this month. The preorders are currently available online in two forms: A “discbox” (CD, bonus CD, booklet, and extra stuff) and a digital download where customers are able to name their price. How cool is that? If it’s good, I am really tempted to purchase the boxed set to support purchasing models like this.

Gaming
The Orange Box pre-load is available for Steam orders now (or is it out? I’ve been busy this week). I really want to purchase it but I don’t see myself obsessing over yet another new game at this point. I am devoting most of my extra gaming time to levelling dear ignored Doombeard to 70 <3.

So speaking of games, I am interested in purchasing a new game console either this year or early 2008. ONE game console, I don’t have enough time or interest for two. I am almost completely sold on purchasing a Wii for Zelda, SSBB, Metroid, Mario, etc. But, if the PS3 price drop speculation is true, I would be tempted to go Sony. Hmmm…

Meh, busy lately. Oh, Heroes is back! If you haven’t seen it, all of the episodes are available online at the official NBC site. A few other things that I have been up to when I’m not in the office or on WoW:

Paladin PTR Changes
Several paladin changes were made in a recent PTR patch. Well, it’s a start but I’m not going to start cheering until Illumination is at 75% :P. I actually haven’t had a chance to take a gander into the test realms. Perhaps I will this weekend, I want to see exactly what changes were made to the talent trees (paladin = poor, I don’t want to respec).

To-do: Site
Though honestly, the only time I really work on stuff like this is when I am procrastinating or have had too much coffee.