I haven’t written anything here or really played much of anything lately other than iOS games; Due mostly in part to having recently moved as well as the fact that electrical work needed to be done before we were comfortable with plugging in our computers. As a result of the aforementioned events, we have been mostly unplugged for the past week and some change which, to be honest, wasn’t all that bad. Though, as we ran out of items to unpack and organize, we quickly ran out of things to do. But alas, now that computers are finally setup, we can once again do whatever.

Also, we do have every intention of continuing the podcast soonish once things are more settled in. Yay for having an actual office.

WoW Stuff: We have been running Highmaul via LFR and it is, needless to say, even easier than LFG heroics. TLDR Strat for all bosses: Don’t stand in things. People however, actually died during some of the fights in the second wing so maybe the instance will get harder? Gearing for raids feels oddly trivial given that I can churn out iLevel 645+ epics without leaving my garrison via the high level garrison missions and blacksmithing epics.

In regards to the Steam Sale/whatever digital distribution network sale, the one and only game that I have purchased for myself so far is Prison Architect. I am pretty tempted to reward myself with either Shadows of Mordor or Dragon Age: Inquisition, especially since both are on sale at the moment at a similar price. But you know what? The older I get the less I care about playing anything at release unless it is a title that I am really looking forward to playing or have some sort of social agenda. So that said, I guess I’ll wait. Plus, we have Mario Kart 8 and Smash Brothers to occupy our time.

We finished two shows recently: The Legend of Korra and Sword Art Online II. We will probably discuss these whenever holiday social activities die down and we get around to doing the next podcast episode.

I kind of want to do a Best Of 2014 gaming post, but I don’t think that I played enough new titles this year to warrant said post. 2014 does however, mark the year in which I have almost exclusively relied on YouTube, Twitch Streaming, Podcast and Social Media personalities for game opinions (in addition to friend recommendation and normal Reddit reading) versus reading Kotaku or any major publication .

I’m not going to promise that I am going to regularly update my journey to level 100 because I am generally horrible about updating this thing, but I will make a valiant effort.

My initial fixation with World of Warcraft has obviously passed, seeing as how I have not logged onto the game in about two weeks or so. There really though, is not a whole lot to do in WoW at the moment other than to level my alts and raid on my paladin, which I’m not in the mood to do at the moment. In theory I should clean up the mess that is my bank. I guess much like virtually everyone else, I am just biding time until the expansion pack releases in a couple of days.

I admittedly haven’t been playing much of anything other that The Sims 4. Partially due to being real-life busy, partially due to spending time with other hobbies, and partially due to obsessively playing and documenting my Legacy Challenge Family. I am actually pretty close to completing the challenge. Generation 8 just reached adulthood, so generation 10 isn’t all that far away. I haven’t decided if I am going to start a new challenge afterwards or if I will put this game down for a bit to play other things.

The Naruto manga has come to an end after 15 years. I started watching/reading it shortly after the anime series was released in Japan, so it’s a series that I have been following for quite some time. I’m not sure how I feel about some of the romantic pairings. It’s almost as if Kishimoto started coupling the leftovers (Choji, Karui, etc). Also, apparently everyone had sex and spawned at literally the exact same time, given that their kids are presumably all around the same age. Regardless, I am pretty satisfied with the ending.

I am still playing The Sims 4, but mostly in an on-and-off function. Also still working on my legacy challenge and have posted a couple of chapters here. I am getting kind of tired of playing the same family, so I think that after I catch the blog up to where I am in the game, I will take a small break from the challenge to play another household or work on some other “sim project”.

I have noticed that the load times have gotten a bit longer. Instead of taking about 5 seconds to load a lot, it probably takes around 10 to 15, which is annoying but tolerable so long as it does not increase significantly past that point. I will have to say though, that after almost a month of solid play, the game hasn’t crashed, locked up, or presented any serious issues that have caused me to reload the game or a save (unlike its predecessor). So in that respect I am impressed. I guess.

I have also setup a forum that no one will likely visit.

There’s just not a whole lot of new and interesting media to play or watch now, is there? I say that as I am thumbing through my ginourmous backlog of purchased, undownloaded, and unplayed Steam games. I think the only new titles releasing anytime soon that I am looking forward to playing would be The Sims 4 (even though I know that it is a complete money trap) and Destiny.

Hearthstone
As just about everyone on the internet is aware, Curse of Naxxramas went live this past Tuesday and as such, I picked up Hearthstone again. I am having fun with my paladin taunt deck and hunter zoo deck though unfortunately, since I never played all that much in the first place, I still have quite a few cards to unlock before I can build the decks that I really want. I am pretty dead set on not spending any real life money purchasing card packs so, a lot of play time ahead.

Ingress
It’s like a multi-player faction vs faction version of Nintendo 3DS StreetPass. Mechanically, there’s not a whole lot to it other than opening the app and clicking on a Portal of there happens to be one nearby. The only actual element of skill involved, if you can even call it skill, is the amount of time that you have spent tapping on your phone and happening to live or work close to a portal. But that said, it’s actually a lot of fun and apparently absolutely everyone I know plays. I really like how Ingress encourages community play and the visitation of places that they may not have considered visiting if it wasn’t for the game. Just about every mural, statue, and public art display has a portal so at some point in the near future, I will probably go walking around, looking at art, and tapping on my phone. Oh: This game eats battery life.

Clash of Clans
I am currently TH5 and at the point where upgrading things takes at least a day if not multiple days so play time for this particular title has slowed down drastically as I don’t really want to upgrade to TH6 without upgrading everything to as close as max as possible.

I guess June is turning out to be a fairly heavy media month in the sense that I have more free time and there are actual things that I want to watch and play, yay!

On a general tangent: About a month ago I was bored and checking on a few things and ended up impulse registering a vanity domain, Cheeseism.net because it was “on sale.” I am not sure what else to do with this site at this point.

First off: I guess this really isn’t within the wheelhouse of topics that I usually post about on this site but if you can spare some change, a donation to support Team Ashely for the Cystic Fibrosis Foundation would be very much appreciated. It’s a good cause to support a good friend.

The 4 games that I have been playing recently are: Diablo III and FTL: Advanced Edition on my computer and then Threes and Neuroshima Hex on my phone (damn fine strategy board game available for both iOS and Android if anyone is looking for one). Diablo wise: I kind of want to switch back to my stun build because of the bracers that dropped last week, but I kind of don’t want to give up the movement speed bonus from the Tempest Rush build despite the fact that I’m not sure it really is all that damage efficient. Well, that and the fact that it is a kind of a squishy build as I am almost completely reliant on movement speed bonuses, which is fine and dandy until I get jailed or teleported into the middle of a green/arcane/fire poo pile in between seven sided strike cooldowns :/.

Site wise: I changed the layout/format of the seldom updated image gallery a bit and added a new category (I like birds and apparently they occupy like half of the photos that I take). 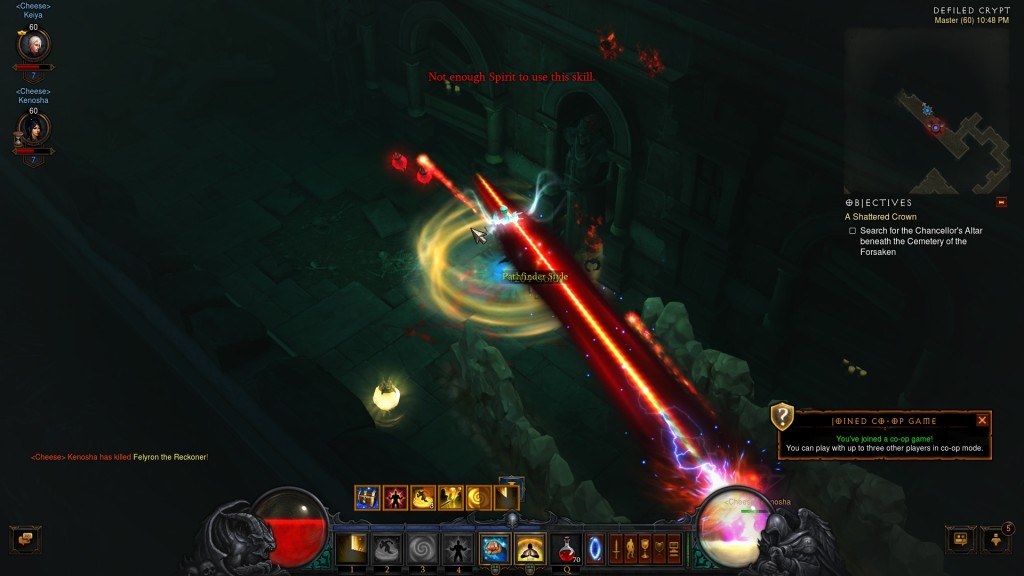 I have a few things to say about the new Thief game, in which I am still working my way through on-and-off when I find the time. But for now, as you can all see per the screenshot posted above, we have hopped on the Diablo III train once again now that patch 2.0 is in the wild. I have been hearing a lot of buzz about it lately amongst various groups, so we caved, patched the game, and gave it another whirl on Friday. Loot that I could use (decent loot at that) actually dropped more than 0 times when we were playing last night. That in itself is pretty amazing. I am still pretty iffy on the expansion pack which is set to release during the later parts of this month, but mostly because I am not certain that I really need to buy yet another new game. Other things:

I am towards the end of Final Fantasy VIII, but my interest is seriously starting to wane as is my obsession with Animal Crossing, but that game is more of a on-and-off affair anyway.