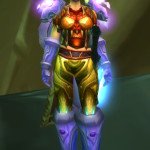 I’m hearing about raid attrition hitting a lot of guilds on my server. I wonder if it is a local issue or if it pre-expansion anxiety. One of the problems with my server is that when drama happens, instead of merging or joining into a pre-existing guild, the general thought is to branch off into a start-up raiding guild. So consequently, there are probably 50 guilds all at the same tier of progression and all fishing from the same pool of recruits.

So the expansion pack! Word on the street is that it is going to be released sometime late Q4 of this year. I wouldn’t hold my breath on that, my personal bet is on it being delayed to early Q1 of 2009. I’m actually hoping that they delay it so that I can squeeze a few more titles into my fall game budget *Fallout3Rockband2etc*. Blizzard works on Blizzard time lol!

Keiya will of course, will remain a protection specced tank upon hitting the serious level 80 content. Until then, I haven’t decided what I want to level as. You know, I haven’t leveled as a prot spec before; I specced protection a month or two after hitting level 70 out of guild need (and never looked back since!). Retribution is actually a pretty fun leveling spec. I might end up going lolret for the sake of pure novelty (I have a reasonable crit set in the bank, we shit spare plate DPS gear).

My hunter, well, he needs to get off of his ass and finish off his last one and a half levels. I’ll replace his mining profession with inscribing. Keiya will remain blacksmithing and enchanting, I’ve soaked way too much gold and time to ever change my professions (in addition to being the official guild armorsmither and one of the official guild raid enchanters). One of these days I’ll have to take a look at the WotLK profession materials so that I can get a better idea regarding what I need to start stocking. That’s what we all did pre-BC and it worked out well.

I might give Heroic Magister’s Terrace trinket/pet farming another go this week since I’m that “busy” during the weeknights. I need to replenish by badge stash anyways, I used a lot of it on my gem spree this weekend, to swap out some of my crap blue gems.