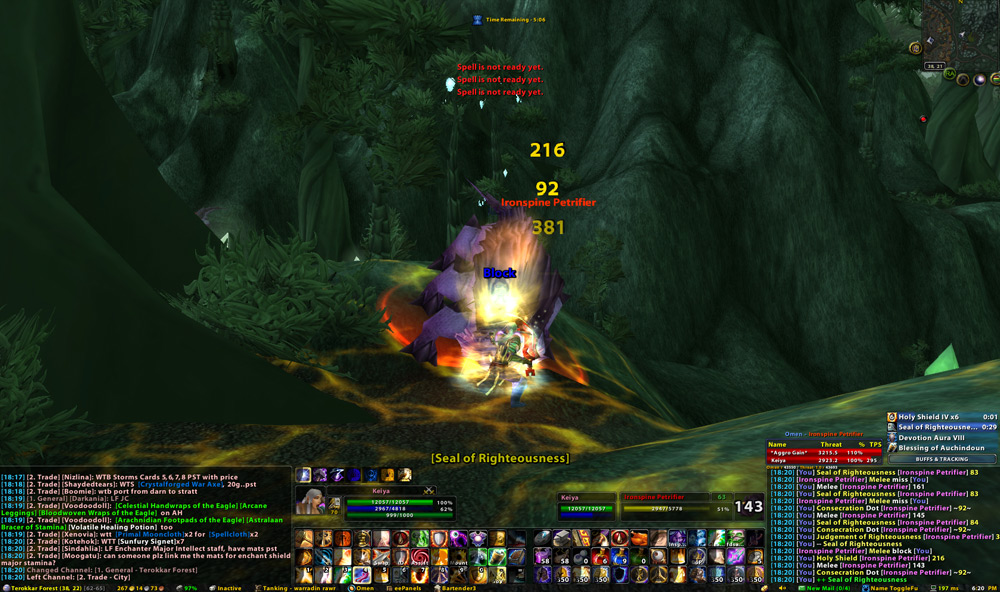 So Karazhan is almost on full clear; Just Nightbane is left, who we took down to 20% on Saturday, our first night of real attempts (we poked him on Monday after Prince for good measure). I’m surprised, it’s not nearly as complicated of a fight as I had previously thought (it reminds me of Onyxia a little bit, that’s probably why). It is though, healing intensive…I need to make sure to come stocked with mana potions so I don’t have to mooch off of people mid-raid.

I won the [item]King’s Defender[/item] from The Chess Event this weekend (chanted it with +40 spell damage). In theory this means that I can stop pining about the Sun Eater (and start pining about something different, like a certain trinket from a certain boss). HP broke 12k unbuffed, but I still feel that’s rather low for my gear level. I need to make a gear wish list.

Oh, and I guess the main topic of this weekly post: I finally updated and changed my UI yesterday (designed for 1680×1050, screenshots are shrunk down). The main idea was to condense it so that not so much space is wasted. I like the original default “2 columns of 12-button” layout, but the decorative frames on either side of the main bar is a waste of space. The only big difference is that the targetting frames are now on the bottom in the middle, which feels sort of awkward.

Unfortunately I don’t have a screenshot of the raid UI because I haven’t fully tested it. It’s actually not all that different because I stuck with CT Raid instead of moving to oRA2 and sRaidbars. It’s an old standby, but it works and there really wasn’t any reason why I felt the urge to change it. Plus, it’s already configured perfectly. I was originally going to swap everything over to Ace2 mods but eh, RAM usage isn’t really a problem.