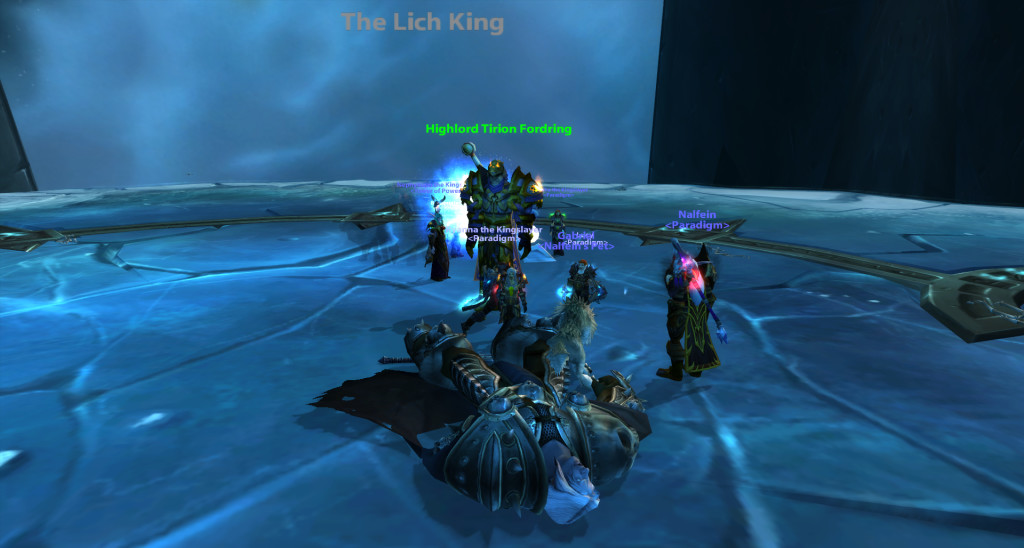 Hey before I forget: Happy birthday Paradigm! Four years is a pretty damn long time in guild years. So are WoW guild years anything like dog years? If so, I guess that makes us uuh 28? Looking forward to more good times ahead! Oh, the Lich King finally kicked it a while back. The screenshot has been sitting on my desktop for awhile waiting to be posted. We finally just got folks together and pretty much razed the place; It was really the last thing (other than Loremaster) that I really wanted to do before Cataclysm.

I’m pretty sure that I got nerfed fairly hard in the patch, though stuff like that usually sorts itself out in time, so whatever. The verdict is still out on what I plan on spec’ing into at 85, though remaining retribution is very high on the list. But who knows, I might go holy again. For whatever reason I tend to change roles with each expansion packs. Other than patch stuff and what not there’s not a whole lot happening in WoW land. I can go achievement farm I suppose, but not really into that at the moment. It’s as good as time as any to take a small break for a month or two to pursue other interests for a bit. Have I talked about Minecraft yet? Not sure I did 😛

There are way too many games coming out in the next month or two. So far my list is: Call of Duty Black Ops, Assassin’s Creed Brotherhood, Cataclysm (obviously) and possibly Fallout: New Vegas. I’m skipping Medal of Honor (heard that it sucks, not really interested in it at the moment) and will probably hold off on Fallout for a while. After all, there is a fairly large Minecraft update coming out at the end of this month. I highly expect that it will rekindle the obsession.