What’s in my bags? 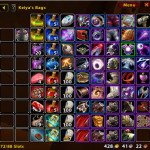 The topic idea is from Galoheart’s post at Ardent Defender, who posted a screenshot and a description of what he carries in his bags, thought I would post my own. So what’s in your bags? This is what was in my inventory last night before Karazhan (for Gruul I use the Ogri’la pots and flasks).

41 slots are dedicated to gear, though I’ve managed to prune some of it down lately. My resist gear is stored in the bank…I used to permanently carry around my fire resist set in the Molten Core/Blackwing Lair days, but I don’t have enough bag space anymore to do that lol. I carry a tanking set (with extra spell damage, dodge, and mitigation pieces that I swap in and out), a spell damage set, and a healing set. In theory I don’t need three 2-handed weapons…

For fun: Tonk remote, Vargoth’s staff, non-combat pet, and sometimes the Barov trinket, which gets popped at awkward moments. 4 or 5 more slots are for warlock healthstones and mage water, 1 slot is for the Void Crystals from shit drops that were DE’s, the rest of my free space is for trash, chant mats, etc.