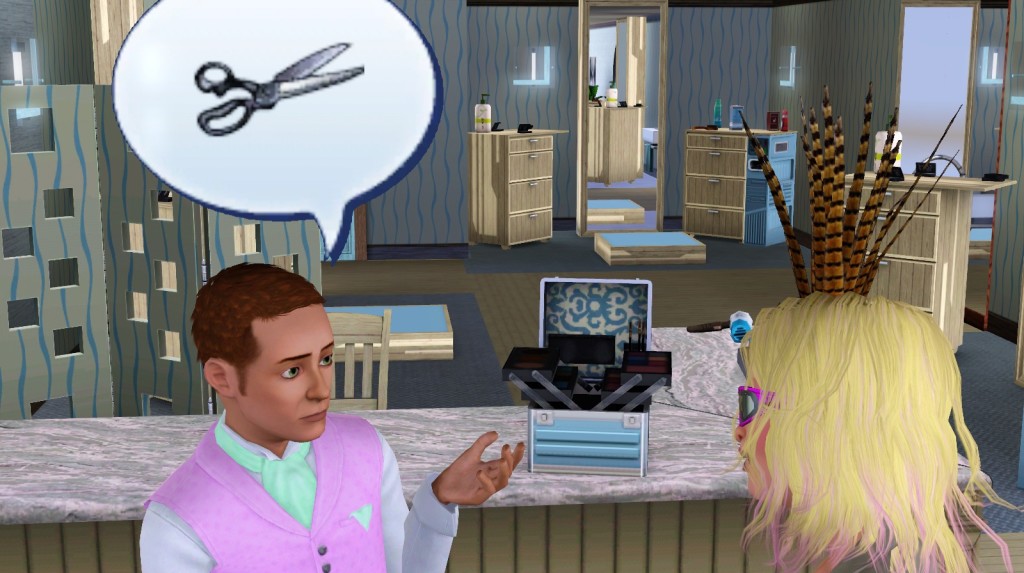 Job related content or rather, the distinct lack thereof has traditionally been a huge gaping hole in every single Sims game. Normally your sims choose a career path: Medical, business, food, whatever. In terms of gameplay, that career consists of little more than vanishing into a building for about 8 gameplay hours 5 days a week. Assuming that all of your sims have a regular job/school, that is almost a fourth of the game per sim spent doing almost nothing.

Ambitions is good because it allows to you to actively control your sim at work. I won’t bother explaining the details for all of the new professions because that has already been done and uuuh I haven’t played them all to be honest. The new profession objectives are fun, though fairly typical in what you would expect from the Sims style click based gameplay (run around, click, do something, repeat). I like the stylist and the architect professions because they affect the outward appearance of the town and its people (it is fun giving people pink mullets :P).

Twinbrook is the new town set in a half-flooded southern swamp-ish area. It’s well designed with a lot of atmosphere and character and show cases some of the new graphical effects. My one complaint is that it is very limited in size to the point where there is absolutely no where to place a 64×64 lot to start a Legacy Challenge.

I am going to hold my tongue on this one, but I haven’t encountered any serious glitches yet. I am sure though, that the serious game breaking bugs will surface in time (like the World Adventures family tree glitch which to date has not been fixed or really discussed much at all). By the way, I repeated the exact same thing from this post on the Ambitions executable to enable large addresses. My game has not crashed yet.

Ambitions isn’t a radical addition to the Sims 3. Even though the professions are fun to play and do actually add core gameplay to the franchise, they generally fail to integrate into the old career paths (with the exception of the medical career), to the point where there is a stark contrast. The old careers are boring in comparison to the new professions and I don’t really see myself ever going back to them. But, ultimately, Ambitions only adds 6 professions to the game which isn’t that much content for a long term play sort of game. Still, it is nice to see an expansion that isn’t based off of adding another loading zone ala World Adventures.