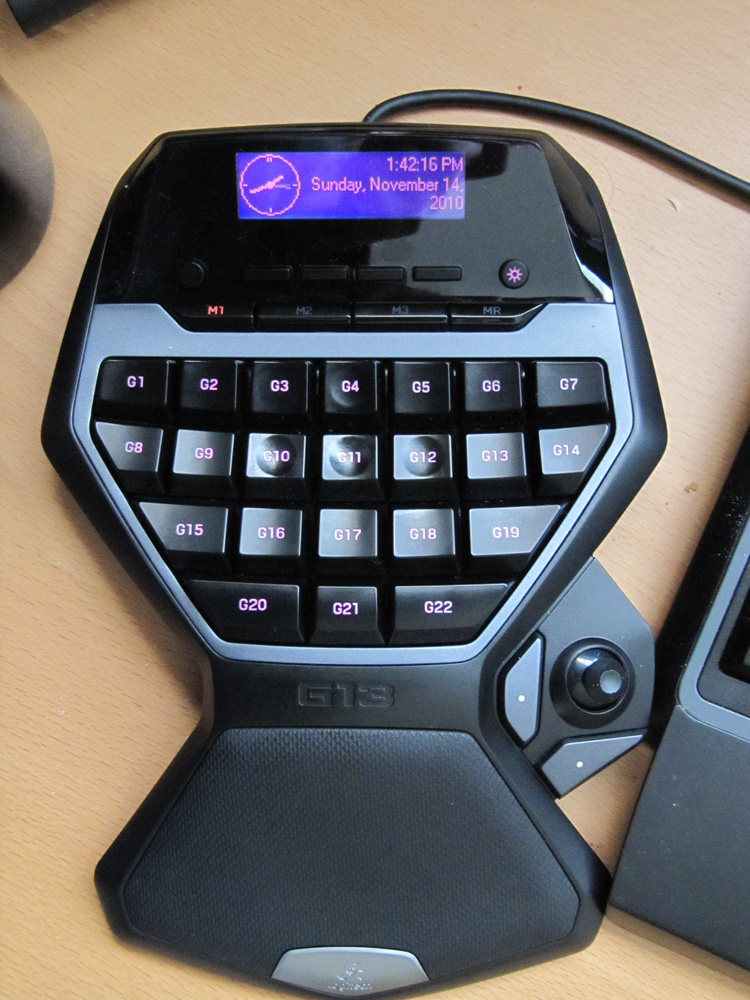 Edit: My WoW configuration is posted here if anyone is intersted.

Just a little background: I have been using the Belkin n52te and its predecessor the n52 for a number of years. It’s a great device, great functionality, pretty decent software and an okay(ish) build quality. The software though hasn’t been updated in quite some time. I don’t think that Windows 7 is listed as a supported operating system (I mean, it works fine, but still). But that aside, the computer peripheral itch hit me once again so here I am, with yet another gamepad: The Logitech G13. So, this post isn’t so much a review as it is a semi-comparison to the n52.

It is also worth noting, just as a general preface to any gamepad: These devices really shine in MMOs and perhaps PC RPGs with a crapload of buttons. After binding every single ability and overcoming the learning curve, there was a notable improvement in my performance and reaction time. It  does though take an amount of time to create a profile, bind shortcuts and learn the layout for a possibly not very long computer game. So if you are a WoW player, highly recommended, especially for classes with an enormous amount of keybindings. Other game genres like first person shooters? Not so much.

As always, with any peripheral, ergonomics will differ according to hand size and personal preference. You really need to give the G13 a test drive on a store display or at a friend’s place before purchasing it. From my experience, it is suitable for people with medium to large hands. I find the gamepad comfortable with my average sized chick hands, though I do have to awkwardly stretch my fingers over to hit the G1, G7, G8 and G14 keys. Small handed folk may want to find another alternative.

G13 itself is much more comfortable than I thought it would be. I was initially worried about it’s curvature. It is much flatter in comparison to the n52 and was under the impression that it would feel awkward or something. I am actually finding the G13 to be less of a strain after extended play periods. The palm rest is textured nicely and the flatter design is more in tune with how my hand wants to naturally rest. I have two ergonomic gripes though. 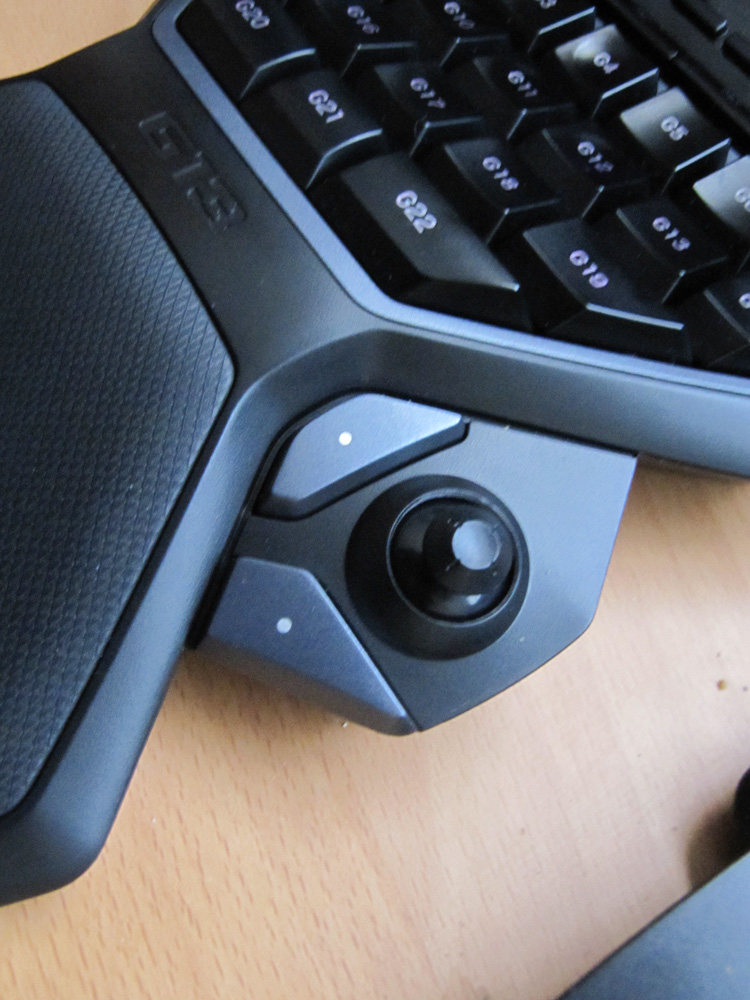 One, I wish that the thumbstick was a bit closer. One element that I really liked about the n52’s design was how the D-pad was angled. In terms of location and distance, it sat exactly where my thumb wanted to sit. I have to stretch my thumb over a little on the G13; It’s not uncomfortable but it doesn’t feel optimal. The thumbstick’s hat is also a little small for my taste. I wish it were a little bigger.

Two, I wish that the first 2 columns of keys (G1, G2, G8, G9 and G15) were shifted downwards by perhaps a quarter of an inch. The first column of keys on the n52 are slightly lower (along the horizontal axis) than the other 4 columns, which makes sense seeing as how most human left hands have pinkies that are shorter than the other 4 fingers.

In terms of build quality, I have always been very pleased with Logitech’s peripherals.The G13 is no exception: it is a very well constructed and solid device. I mean, it has to be at least 5 times heavier than the n52. The thumbstick doesn’t creek and the paint doesn’t look like it’s going to wear off. It feels premium. My n52te still works, but there is notable wear and I am wondering if I will run into key sticking problems in the future. If the keys on the G13 are of the same make as Logitech’s gaming keyboard line then I shouldn’t have any problems. As far as the LCD goes, it’s almost identical to the LCD on the original G15 keyboard. The one thing that I really miss about the G15 LCD was the ability to see who was talking on Vent without having to tab in and out. 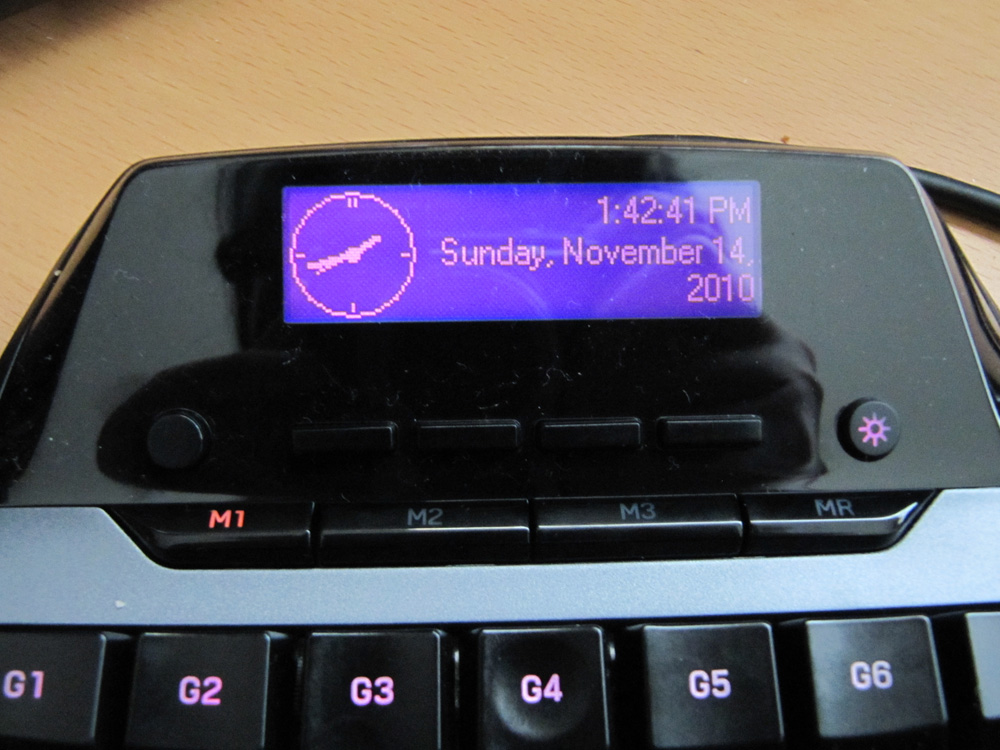 Ergonomics aside, if you are already used to playing with a gamepad then there isn’t much of a learning curve. You can pretty much transfer your entire n52 layout over button for button with leftovers (the G13 has way more bindable keys). By the way, using the LUA scripting future build into the keypad software, you can even retain the n52’s shift state toggle functionality. For example, on my WoW profile (default state being M1), the G11 key will activate hotbar slot 3. When my WoW profile is set to M2, the G11 key will activate the map. I have thumb button G23 bound to momentarily shift into M2 when pressed and back to M1 when released. So in order to activate my map, all I need to do is press both G23 and G11 at the same time.

I will go over my WoW profile in a later post when I finalize it, but in a nutshell, I have combat abilities bound in M1, menu items (map, bags, talents) bound in M2 and extras like the raid icons and recount screens bound in M3. If anyone needs it, I can also post my LUA script. Oh: The thumb buttons on the G13 are a lot easier to press than the n52’s thumb button.

If I haven’t already mentioned it: The Logitech’s software is really pretty nice. It uses the same configuration program for their gaming keyboard line (as you can probably see in the screenshot). The G13 is a bit expensive for what it is, but that’s just the way it is with gaming peripherals, or so it seems. As mentioned above, try all of the gamepads out in the store before buying one. If you are impartial, you might as well just get the G13. It has better software, it’s built better and has more buttons.

If anyone is curious, size comparison: 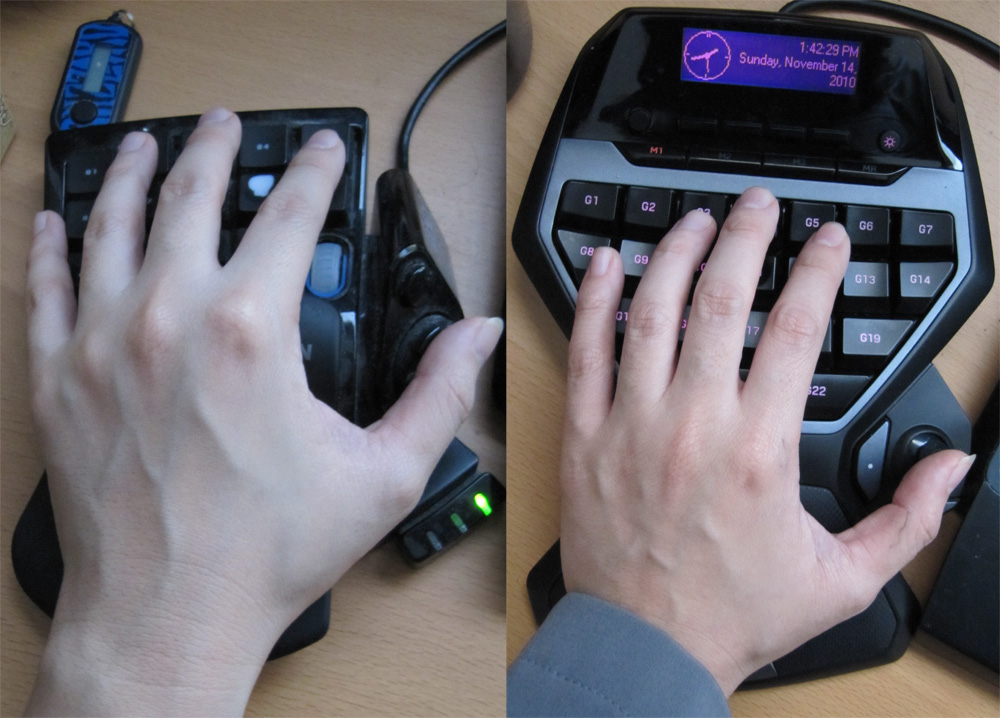