I fell victim to the office plague this past week and ended up spending a beautiful weekend indoors; So, this post as well as half of my Netflix queue was the result. I kind of wanted to do a series of posts on both world building as well a case study of several of the games cited in this entry as well as several others: Return to Krondor, Baldur’s Gate II and a couple of others are also single city games widely regarded as pretty decent. But I don’t think I have the time or interest to play through some of those games again, since it has been so long. Anyway, I think that city settings have been a fairly popular tabletop RPG setting; Either as a part of a larger campaign or some sort of one off story. But how well do they translate into video game narratives and what is needed in order to craft a good city?

Video games RPGs, unlike their pen and paper brethren obviously do not have the luxury of an imaginative game master to make up new and interesting things throughout the course of the campaign. The game engine must fulfill that roll; Often with many limitations. One of which is the challenge of creating diversity within a smaller environment. Typically, most large game cities only have about 4 or 5 “zones”, perhaps up to 10 if you include surrounding areas and stuff like that. Fewer areas should in theory mean that more effort needs to be placed into making each area feel unique.

I think what most games do is create a microcosm of a normal sized game world, offering tastes of the same kind of experiences, but laid out in a compact manner. So instead of exploring a small town to break a tense moment, perhaps you settle into a quiet inn. Instead of a lush forest, a large city park or garden might do. The city sewers can and well, frequently do in just about every game, serve as a dungeon crawl or a means of connecting various zones. Above all else: A small map isn’t an excuse for grossly reusing layouts and artwork, that’s just rushing the game or lazy art direction. If reuse shows in a standard RPG, it REALLY shows in a game with effectively only one major city. I really like it when different areas utilize a different lighting scheme, different color pallet, different architecture to create a different atmosphere from one area to another.

Even greater attention to detail needs to be put into creating the game environment. For example, where is the city located? Is it located in a moist area? Then perhaps lots of mold and damp wood rot may make sense within poorer sectors. But for a city located within an extremely sandy arid  environment, probably not. Also, for what it’s worth: Windy confusing paths look great on paper but often end up being a huge pain in the ass. If I have to repeatedly visit a zone, please don’t make it a pain in the ass to navigate. Along similar lines, ginormous cities need some kind of travel system (as in GTA sized cities or cities with MANY loading zones).

The player doesn’t have to be a city native, but s/he should feel strongly tied to it and greatly involved in city life. One means of achieving that is to actually have a city life. As in, make the city as believable as possible within the world’s boundaries. Obviously, a magical flying city from another dimension might operate on a few different rules but nonetheless, a players will connect better with a city that makes sense. Alien environments are very distancing (which in itself can be apart of the game). Most cities, real or fake have the following elements:

RPG Cities need lots of NPCs. Lots and lots of NPCs. Not only that, but NPCs that interact with each other and react to player actions. NPCs need dynamic daily and nightly routines other than standing in one spot all day or pacing between two buildings. Characters should interact with each other. As much as I loved the Dragon Age series, I don’t feel that Kirkwall was a very good example of a lively city. There are a couple of NPCs wandering around aimlessly who never seem to speak at all. But for the most part, most of the NPCs within Kirkwall are planted in a single spot. That’s not something that I would expect from a new release.

I like the dynamic crowd handling in the Assassin’s Creed series. If there is a large group of people, I kind of expect at least some of them to react for a short period of time if a person next to them gets stabbed in the face. Bonus points if there is a chain panic reaction. The ability to bump into people and to have that animation play through appropriately is grossly underrepresented (versus having NPCs slide like cardboard boxes). It made the Assassin’s Creed locations feel like bustling cities even though every single one of those NPCs was an AI clone with a limited set of canned responses. The NPC types were also placed in their appropriate zones; Poor zones would have impoverished looking folks and so forth.

This was the part where I kind of wanted to compare similar areas from various different games of varying different ages. But for the time being, The Witcher 2 and Dragon Age: II will have to do. I know that it isn’t all valid of a comparison given that TW2 isn’t a “one city game”, but it’s close enough. Also to be honest, I was too lazy to load more games to take more screenshots. Anyway, I don’t know exactly how to describe it, but for a city that you spend most of the game in, Kirkwall looks and feels amazingly sterile. Consider the following somewhat random set of screenshots from Dragon Age: II. 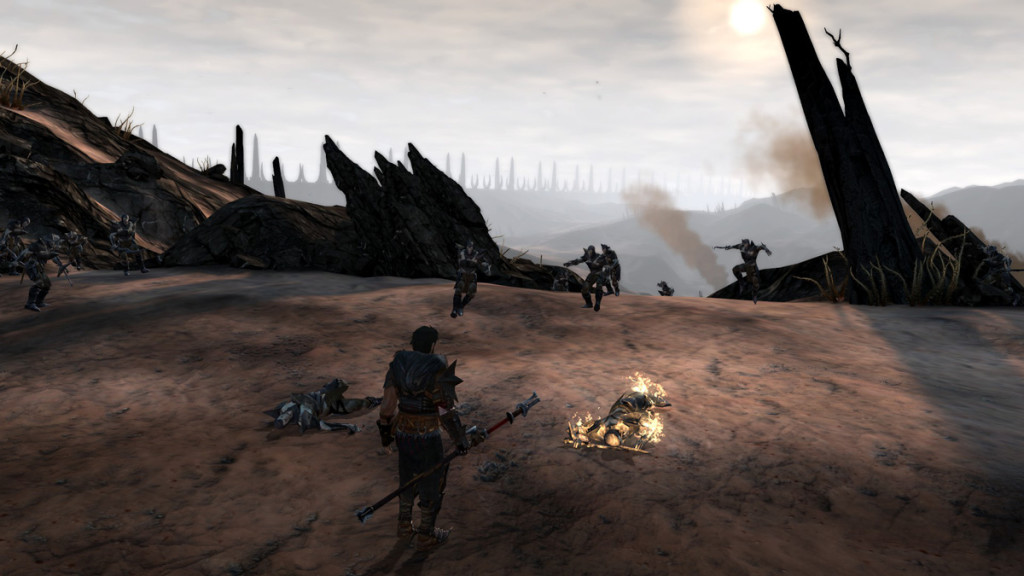 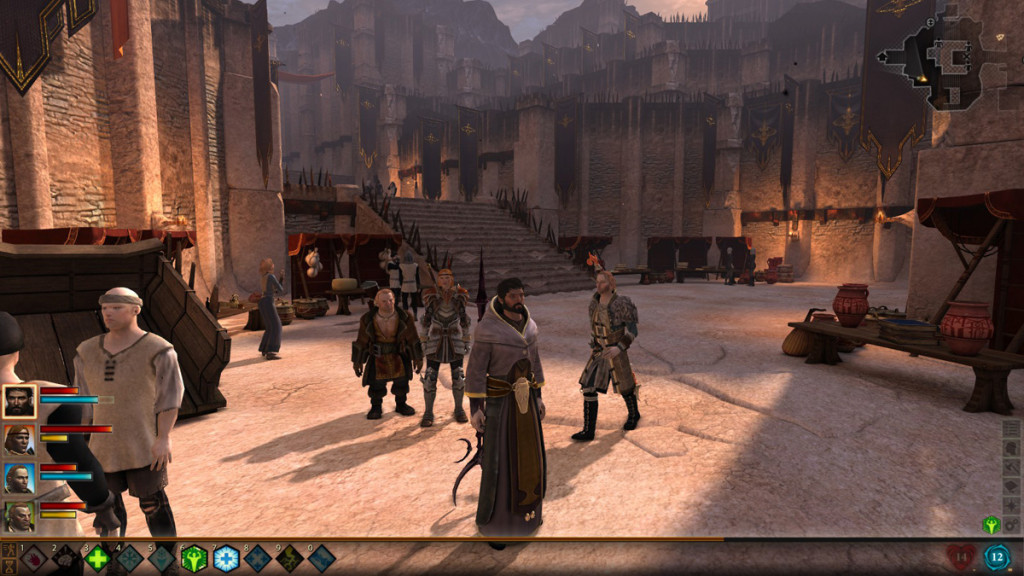 And then even more random screenshots from The Witcher II. Sorry, these were the only “decent and on-topic” screenshots within my Steam directory. 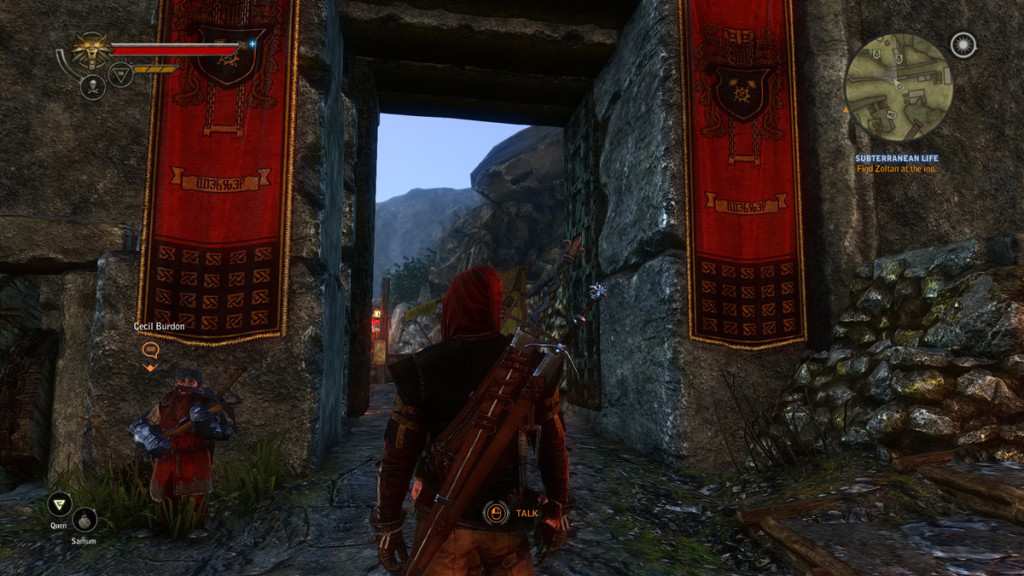 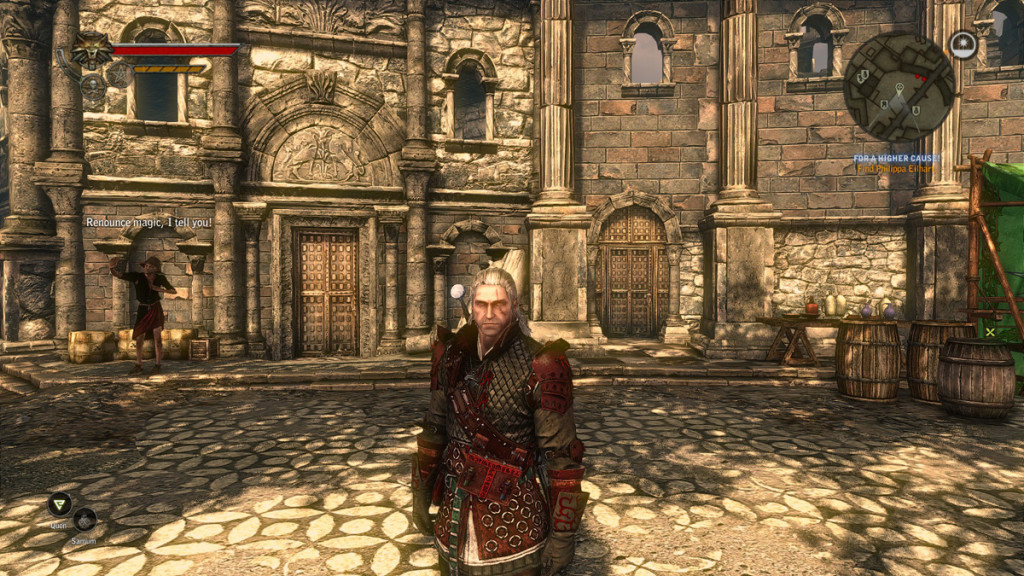 Look at the difference in environment design, particularly the texturing and object density. Why is low town so plain? I want to be able to taste the stink and sick dripping off of every slimy piece of stone and every rotting piece of wood. Dragon Age II is very nice looking, but it feels plain, if not somewhat barren. Actually, I think what bugs me the most is that most of the areas feel awkwardly large with awkwardly wide avenues and awkwardly large areas of almost nothing. I feel as if more NPCs with actual crowd mechanics would have filled some of the empty spots. I’m not sure if for example, Assassin’s Creed is all that “varied” in terms of number of textures used in certain areas, object density, etc, but the crowd mechanics really make a difference.