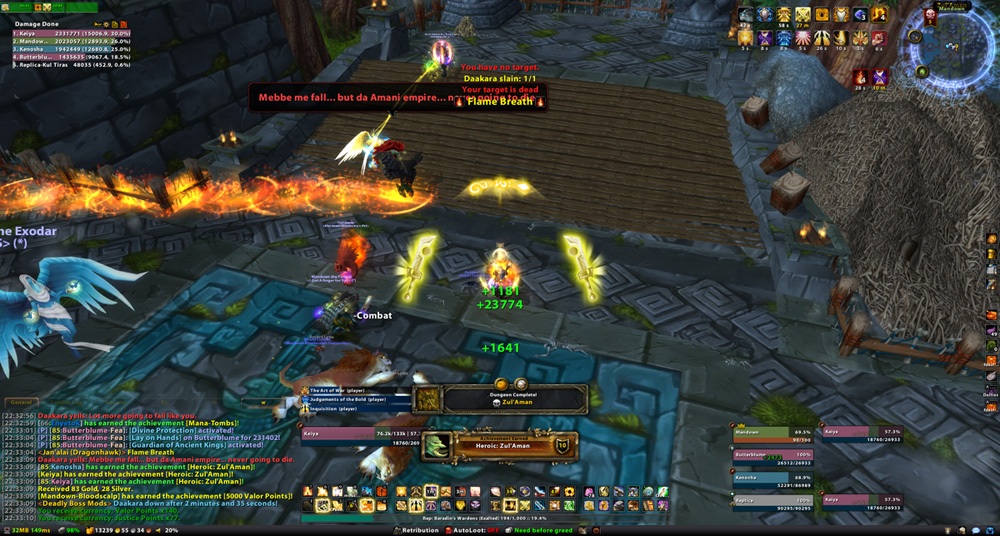 I’m getting the WoW itch (and the blog itch) again. I haven’t been playing all that much for the past month or so, in lieu of other game releases, real life business and the like. In fact, we just got around to finally running Zul’Aman tonight (one of my absolute favorite raid instances back in the day, glad it’s back in the game).

Is it just me or does the 60 to 90 day mark seem to be the make or break point for most new MMORPGs? That span of time seems to be the period in which most of the converts either get bored of or burned out on the new game and start trickling back to old WoW habits. Though, if you truly do play that MMO consistently for about a month or so, that’s actually not a bad value in terms of time:money. A month of solid play isn’t bad for $60, considering how most games nowadays are at about 10 hours of gameplay if you are lucky, some significantly less (or more if you count multiplayer I guess).

The market is pretty saturated with fantasy MMOs to say the least. Do we really need more of them? I would absolutely love a good future themed game (with relatively fast paced action). Word is that Blizzard’s next-gem MMO, “Titan” will be sci-fi themed. If there is a game that I will consider replacing my WoW habit with, it would probably be that. And honestly, Blizzard is probably the only company that’s going to outdo Blizzard. That’s my 2 coppers on other MMOs for the time being.

Also, on an unrelated WoW note: I am kind of a backseat tank ?_?; Not in group of course because that’s fucking rude. Most of my in-head and whisper conversations to certain people have been inane concerns about the current PuG tank, how they fail at threat generation, fail at marking, etc. Though in my defense, we really do have horrible luck with PuG tanks. Properly marking mobs and assigning targets is a lost art apparently. I should learn to tank again, it would make our queue times shorter.