Mists of Pandaria: Day One 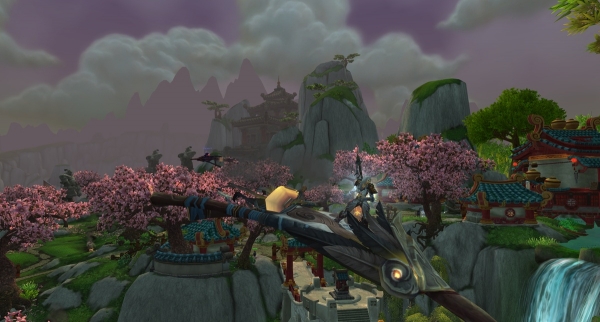 Two miracles happened today when logged into WoW (thus ending my approx 6 month hiatus). One: My user interface didn’t explode and utterly break as expected. Aside from a few errors and missing elements (my holy bar had vanished…), I didn’t have to do much of anything other than download an updated copy of my addons (against my better judgement I used an addon updater because I am lazy). Two: There were no server problems or queues on Proudmoore when I had logged in during prime time on release day. I downloaded the updated last night, logged in when I got home from work this evening, played, logged out when I was done. No queue, no serious lag, no server crashing. I’m not sure if that means anything anymore, but release days have traditionally been somewhat of a nightmare for past expansions.

I am half way through level 85. I did one of the starting dungeons shortly after logging in, leveled in Jade Forest and did the other starting dungeon. Had an absolute blast playing with friends again, which is really what much of the game is about for me; Good times all around. Jade Forest is a gorgeous zone by the way, hard to imagine that a game approaching it’s 8th year can look this good! Not planning on rushing to level 90 to raid as I did with past expansions. I think that I am looking forward to taking my time for once and not rushing through everything to stay on level with everyone else. Also, I don’t think I can really commit to a hardcore or even just a 2 to 3 night a week raid schedule anymore. I would love to raid again with a regular group at some point though.

Totally forgot how to play my paladin which was interesting considering that I was invinited into an instance right off the bat. Yay muscle memory! Also, I may actually go tankadin again this expansion but we’ll see.