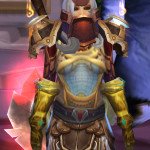 By the way, not WoW related but, if any other Drupal user was having trouble getting Lightbox2 or Thickbox working after upgrading the Drupal Image module to 6.x-1.0-beta2, there is a patch for the issue here. Commenting out lines 641 through 644 in image.module works too.

I don’t really like the way the paladin tier-8 helm looks or the set in general for that matter. It’s one of those things that looked great conceptually, but didn’t translate very well into the WoW graphics in-game. I mean, look at me, I look like a half-wit shaman. If I am going to be wearing a dress, they could have least have given me my sexy tier-8 midriff back,QQ.

Oh also: I’m pretty sure that this like was already posted on wow.com and probably dozens of other blogs by now but, here is a great resource for macros: Fitzcairn’s Macro Explain-o-matic. Copy-and-paste your favorite macro into the text field and the site will explain exactly what it does in plain non-technical speak English.

I think I forgot to mention this change in the BlizzCon posts; It was shown on the Cataclysm videos and discussed in the art panel but apparently, the water effects will be getting a major overhaul in Cataclysm to put them on par with water effects present in newer games. I’ve gotten used to many aspects of WoW’s graphical appearance, including the water. It plays such an important part in the look and feel of most zones. Very swank.

So preparing for Cataclysm: Since the old world as we know it is going poof, it’s probably not too unreasonable to suspect that some or all of the 1 through 60 pet quests will vanish as well. Sadly, I never bothered getting the Mechanical Chicken, Smolderweb Hatchling, Sprite Darter Hatchling or the Worg Pup when I was questing. There are quite a bit of mob drop pets that I don’t have, but I don’t really feel like spending days farming for them.

I kind of want to complete Loremaster before the expansion hits, but fat chance that this will ever happen. I can probably knock out the Eastern Kingdoms if I can ever find the 44 quests that I am missing, but I’m only 344/700 inKalimdor. If the weather sucks and I am really really bored one weekend, I’ll pop in a few favorite DVDs and marathon grind them out. I also still need to revisit many of the old world 5-man instances for the Classic Dungeonmaster Achivement. I still need: Wailing Caverns, Blackfathom Depths, King of Dire Maul, Ragefire Chasm, Shadowfang Keep, Razorfen Kraul, Scarlet Monastery, Zul’Farrak and Scholomance.