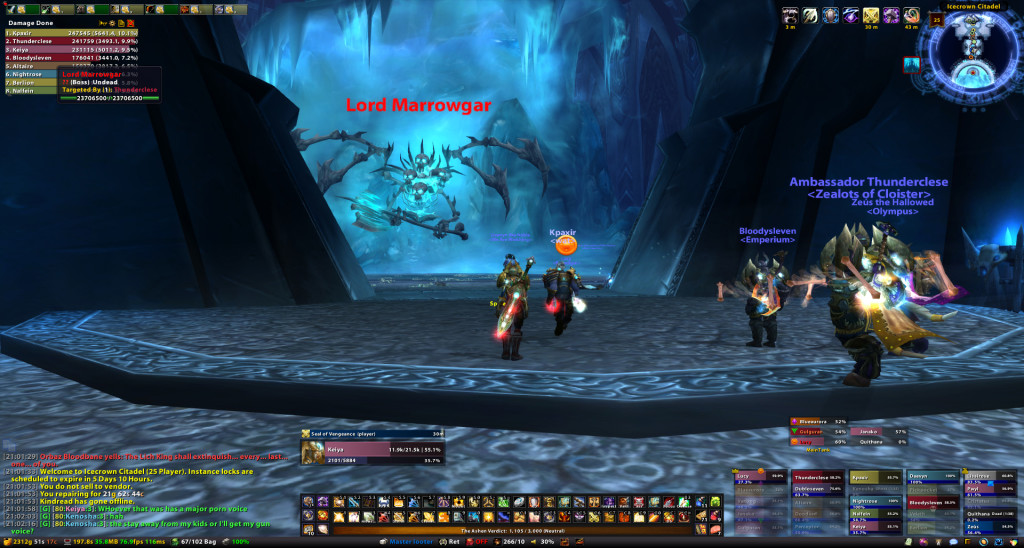 Okay, so I have a half-assed Borderlands review rotting in my temporary post bin. Long story short, I started a new job a little while ago. So between that, the upcoming holidays and what not, much of what I was going to post on this site kind of got pushed to the back burner. Oh so I built my new computer a couple of weeks ago and zomg, I can raid 25-man instances again without locking up or dropping below five frames per second. Yay! The video card that I wanted (Radeon HD 5870 wasn’t in stock anywhere…I’ll have to order that later :/

PuGs: For the past month or so, my guild has been running regular Wednesday night 25-man PuG runs in Trial of the Crusader to some success. Every week we seem to get close on Anub, but fall a bit short in terms of DPS performance. After our first PuG run, we started holding the loot tokens, patterns and orbs for end loot (separate loot roll table from the other boss drops, which are rolled off after each kill). Doing so seems to have stopped the, “rotating door of PuG members who like the suspiciously perma-DC from the raid” problem for the most part.

3.3: My guild hosted a 25-man Icecrown Citadel semi-PuG raid tonight; Basically in place of TotC in the interest of doing the new content. We cleared trash, did a few attempts at the first boss and then called it a night (we end the raid at 10pm). Not so much luck on Marrowgar, but it’s fun learning new content. Thinking that we will probably have more luck bouncing strats off of one another in guild versus in a 25-man PuG. It’s nice getting input from fresh faces, but kind of a pain getting random ass people to organize in an instance that no one is familiar with. I haven’t had a chance to do any of the new 5-man instances or use the random LFG system. Tomorrow night maybe?

Stuff: I was one and a half achievements short of the thanksgiving title and pet. Totally got busy that weekend and forgot about it. Oh well, at least I have my shiny purple 310% proto-drake. This whole new long ass daily commute + time management thing: I’ll figure it out and start posting more.