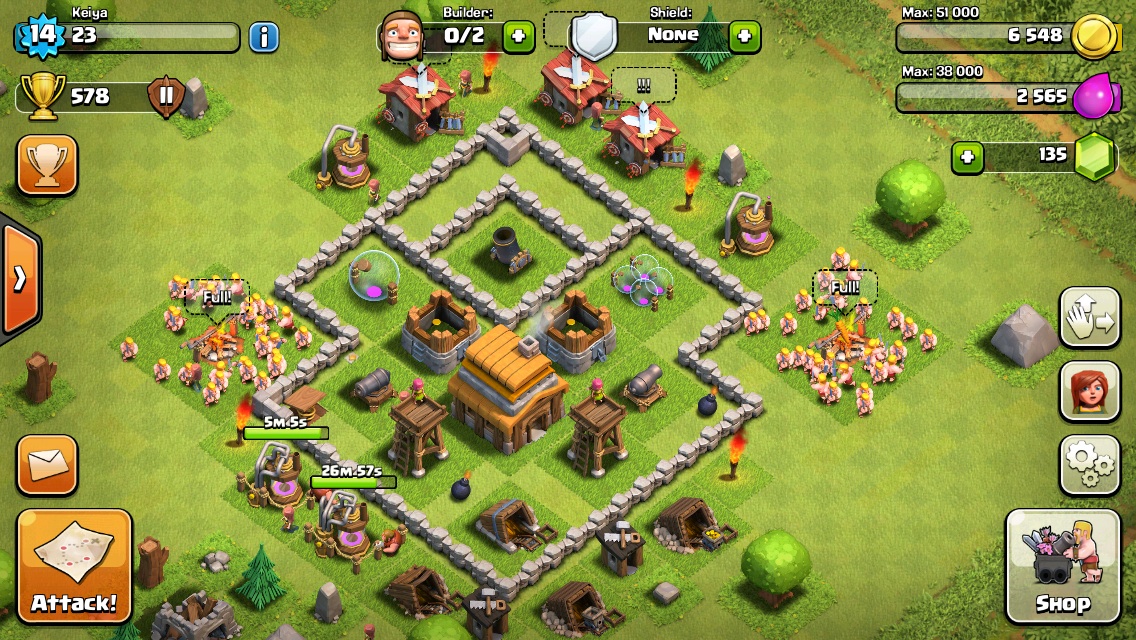 After hearing about Clash of Clans on and off for about a year or so, I finally gave in and downloaded it (free-to-play). I guess what I expected was something akin to Rage of Bahamut or Guardian Cross, in that I was assuming it would be yet another thinly-veiled in-game purchase money making scheme with mechanics no more complicated than tapping one or two buttons every x seconds/minutes. I was pleasantly surprised with what I found instead: Clash of Clans is a decently polished and well fleshed out free-to-play resource management/base building strategy game. It’s kind of like a multi-player tower defense game.

There are 3 resources to manage: Gold, elixir and gems. The latter of which is available for in-app purchase (also obtainable in small amounts via unlocking achievements). Units, buildings, and upgrades cost a x amount of either gems or gold to build on top of a build time. Gems can be used to refill your gold and gems or to complete buildings instantly; That is, at least to my understanding based off of 3 days worth of play, the extent of the monetization in this game. There’s no invite referral bonus and there really isn’t any player tradable in-game currency or economy. I also don’t feel like I am being pushed to buy gems since everything within the game at this point is easily achievable by just playing the game or waiting for upgrades/buildings to finish. I guess, the mere fact that I felt compelled to dedicate an entire paragraph to basically say that this game doesn’t feel like a scam says something about the state of mobile gaming, but whatever.

I don’t know what the Clash of Clans end game is like since I have not yet joined a clan. As of now it’s a pretty fun game. So if you are looking for something like this, I would highly recommend giving Clash of Clans a try.

Next ArticleBrothers: A Tale of Two Sons