Here is just about every arbitrary interest from the past week or so. Also do you know what day it is today? Today is Doctor Who Day.

Women’s Wallets Suck
I am looking for an inexpensive leather slim wallet that will hold: Approximately 1 to 2 bills (at most), 4 cards, and maybe 1 or 2 miscellaneous items such as slips of paper etc. I prefer wallets with a dedicated ID window but it is not a deal breaker. It must however be leather because that’s just how I roll; It also must be durable, well constructed, thin enough to fit in the front pocket of my girly jeans, and not retardedly stiff. I am willing to pay more money for a wallet of exceptional quality, but it must not be stupid expensive; There’s no need to spend serious cash on a designer item that stays in my purse/pants. This is the wallet that I am considering.

Cameras
I am looking to purchase an entry/mid-level DSLR or mirrorless camera for both traveling and casual hobby related photography. I have been looking into one on-and-off for years, but I kind of need to buy one within the next 6 months, preferably by the end of the year so that I can spend some time with it actually learn how to use it. Realistically, I am just beginning to dip my toes into actually doing more than pointing and shooting with my cellphone or current camera. I want a camera that will stay with me a while and have a lot of room for growth yet will not be too difficult or too advanced for a relative beginner to use. Form factor is also a concern since I will be traveling and possibly hiking etc with it. Setting a general budget at $800 but that’s pretty flexible figure.

As such, I am leaning towards purchasing a mirrorless camera instead of a DSLR. I would also like a fully articulating or at least tiltable screen, but that feature is not a deal breaker. The front runner so far is the Sony NEX-6.

I loaded Animal Crossing: New Leaf for the for the sake of claiming my birthday gifts today. A brief pang of guilt was felt for having effectively abandoned my cute little town for the past two or so odd months to play GTA, Pokemon, Hearthstone, among other things. 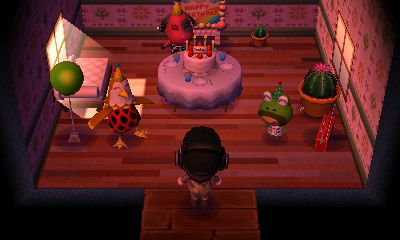 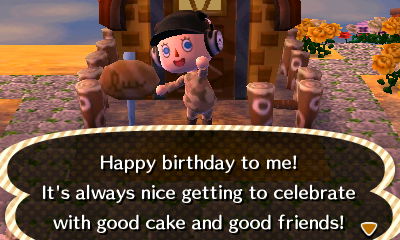 Pleased to find that not only had my favorite three villagers (Ava, Prince, and Cherry) not moved out, but were in attendance at my surprise birthday party. Similarly, shitty the hippo (Rocco) had finally moved on to better places.

So the new WoW expansion is as expected, WoD: Warlords of Draenor or more accurately: Way Over Due. I really was not expecting to be this excited about the WoW expansion. Truth be told, I wasn’t even planning on returning to the game or buying it at all because let’s be honest; While the last two expansion packs have many good qualities (improved graphics, improved questing mechanics and flow, wider variety/more level cap activities), as a whole they have at least in my opinion, felt mediocre and too far removed from core lore of the Warcraft franchise, if the lore even matters anymore. WoW for me peaked in WotLK, which has been my favorite expansion by a huge margin.

As things may be, Blizzard announced exactly what they needed to announce in order to entice me back to WoW. So come WoD time, both Dave and I will be back in business! This will be the first expansion pack in which there will be no new races or classes; So that in theory should mean that the time and energy normally spent developing the new starter areas will be distributed elsewhere. I guess we will see. Things that I am really jazzed about

Regarding other BlizzCon announcements: HoTS may be the MOBA that I end up playing purely because of the fact that I am familiar with Blizzard’s franchise. Also, if blizzard is even mildly serious about eSports and the WoW arena they need to separate PvP and PvE abilities at a major level. Ultimately, I feel that both gameplay types would benefit from a change of that nature as balancing around both PvP and PvE simultaneously has never worked out all that well. 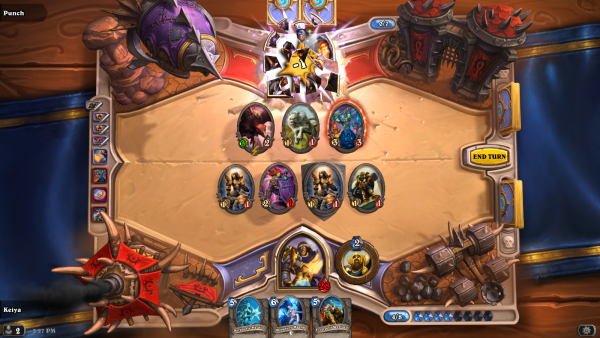 Despite early technical difficulties, I was able to finally complete the tutorial and proceed with the rest of the game. Hearthstone is amazingly polished, from the animations and sound effects down to the clickies on each of the game boards. I really love how well the WoW class flavors have been transferred over to each of the heroes. If you are even mildly familiar with WoW then you can likely figure out what most of the cards with without having to read the card text. I do worry that Hearthstone class balancing is going to end up being like WoW class balancing in that different classes take turns being OP with each major patch, but we’ll see.

It’s free-to-play with a card pack buy in options, but it’s about as pay to win as any standard CCG in that the more packs you buy, the better your deck is likely to be. The basic cards however are quite decent and it is plausible to obtain the rarer cards via the crafting system or by buying packs with gold won from within the game, albeit at a much slower pace. There’s also no card trading so no real-life profiting off of Hearthstone or any of that bullshit.

All cards brought down into 3 basic categories: Spells, minions, and weapons. There aren’t any interrupts and minion health is persistent (as in damage is persistent and doesn’t reset at the end of your turn) so it is much more of a relaxed game to play than say, MtG in that you take your turn and your enemy will take theirs without the inbetween crap. The combinations are also easier to comprehend as the abilities are much more straightfoward and easier to understand as a whole. I also love the fact that non-friendslist player interaction is limited to a fixed set of emotes. There are games in which player communication is important and needed but Hearthstone just isn’t one of them in my opinion. All-in-all, it’s great as a first CCG and very easy to get into.