QQ No BlizzCon Tickets For Me 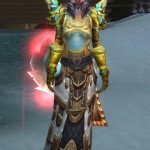 Oh well, I’ll attend BlizzCon one of these days. This summer isn’t a great time for me to go anyways because of various real life circumstances.

We’re still running a bit short for heroic Ulduar. In the mean time though, we’re progressing through Ulduar 10. The tier-8 leggings are more than kind of ugly. Keiya doesn’t like dresses! I do though, really like the way the chest piece looks. But then again,I’ve always been a sucker for plate midriff.

Over the past month or two, I swear that at least half of my favorite WoW blogs have went inactive; What is with that? Speaking of blogs, there is some Grade A internet drama occurring over here regarding this person. What a strange and elaborate thing to do for no meaningful gain.

Even though I could care less about who a person chooses to portray for their interwebs avatar, hiding behind the identity of a hot gamer girl for the sake of gaining a larger reader base is uber lame. Stealing another person’s identity and pictures is kind of wrong and creepy :/.

So I am kind of curious: I wonder how many people think I am male? Most people I encounter in WoW do until they hear me flap my mouth over vent (for a while I semi-refused to speak. I think that made guild members suspicious LOL). The way I write and act, at least online and amongst close friends isn’t particularly feminine. I find that mildly amusing lol.

I have been greatly looking forward to the release of  The Sims 3, which is this coming Tuesday. The Sims (TS2 that is) I guess, is kind of like a gaming mistress. I have on-and-off love affairs with it when my other gaming staples aren’t doing it for me. It’s actually one of the only games that I have (kind of) consistently played on a long term basis. I am pretty fickle about my games and tend to move onto the next fix quickly.

There might be a few posts and possibly a review on that topic as well as another dump of random
cellphone pictures. 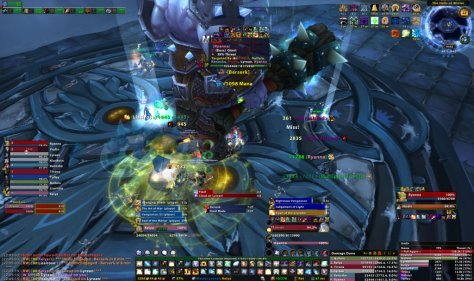 Not much of a “redo” since it looks more or less the same as version 3.0 except for the smaller button grid and the unit frame change. I went with Pitbull because of its layout flexibility. X-Perl was becoming and eyesore with the plethora of windows that needed to be displayed.

I tried to compress all interface elements to the edges as much as possible, because I dislike having junk stay in the center of my screen. I also wanted any unused elements to fold or fade away when not in use so that I didn’t have a giant black bar of death obscuring precious screen real estate.

Class buffs, auras and oh shit spells are grouped and auto-barred on the top left round buttons so that I could keep all of the paladin blessings off of my bars (giant waste of space). Consumables, food buffs, mage food, tradeskills, quest items and stuff like that are autobarred on the opposite side. 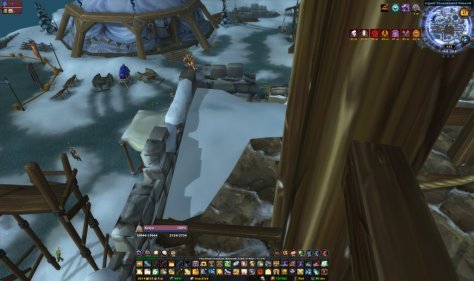 The chat log will fade away after 30 seconds of no activity. The combat log, general chat and trade chat are tabbed. Recount and Omen are docked to the far right. recount visibility is hotkeyed on my G15 and Omen will automatically appear upon enter ring combat.

I like having my bajillion buttons and my combat information displayed, but I also appreciate clean interfaces and to some extent simplicity. So this layout is a compromise…I guess.(Addons listed below) 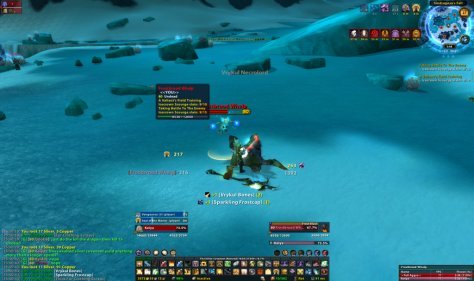 I need to find a stronger deterrent for comment spam. It’s starting to return…

There is a working Wowhead loot link filter for Drupal if anyone is curious about how to use the [item] bbcode tags. The old module died quite some time ago and there hasn’t been a good working alternative until recently. I also finally got around to re-doing the guild homepage and migrating it from the ghetto fugly vBadvanced portal over to Drupal. Yay!

Guild business as usual. We finally have a fairly stable 25-man Ulduar run going on the weekends now. We were low on folks for the past few weeks since returning from our short pre-3.1 raid hiatus. We are though a bit short on tanks, I guess I should finally gem, enchant and upgrade the trash pieces in my tanking set for the sake of being viable for off-tanking. I have a metric fuckload of badges to burn.

So I’ve been really super lazy about my professions for the past oh, several months? I am 5 points shy of the skill cap on both blacksmithing and enchanting…which was somewhat alright until the epic patterns started dropping in heroic Ulduar (by our loot rules only max level crafters are eligible to roll). I have all of the mats that I need for both professions rotting on my banker. Shame on me.

Tangent: If you haven’t seen the new Star Trek movie, go and see it. It is really quite good, independent of me being a huge Star Trek fan. JJ Abrams retained the spirit of the old series without the Trekkie fap. /wants to see it again.