I’m surprised, 2.1 was a relatively smooth patch. No real problems with my UI, no lag, and no server errors, other than the rolling restart that occurred before I got home from work…on my server at least :P. Because of the Spiritual Attunement nerf, my mana does drain quite a bit more, though from what I tested last night, I don’t think it’s that big of a deal; Will just have to throttle my threat generation/mana better in the future. Though, I can’t really say for sure how much the nerf sucks until I test it out in a raid this weekend.

I want this: The Sun Eater, and I am intent on farming Heroic Mechanar every (non raid) evening if needed until it drops. That is a lot of stamina and avoidance on one sword, probably one of the best tanking swords in the game, barring drops from higher raid instances. Since I am already at my 102.4% avoidance/block goal, the sword will push me way over the top, meaning that I can resocket and replace certain items for more stamina/block value.

With the new patch, I am also able to equip my Vambraces of Courage with a Thick Dawnstone socketted into it (used to be warrior only). I still kind of want the Bracers of the Green Fortress crafted, but I am being cheap (and weighing the value of dodge/slightly more stamina against Block Value/socket). Anyways, my current unbuffed tanking gear status after the patch:

103.69% with Holy Shield active and the Holy Shield libram equipped (around 104%+ with BoK). My armor went up by around 1k, and my health by around 300 (HP is still low, I would like it to be at around 12k unbuffed). Avoidance and block went up slightly.

Oh also, several changes as always, didn’t seem to make the patch notes: In heroic Mechanar, Nethermancer Sepethrea will reset once she hits the glass floor in the hallway. What most people did, was kite and blast her all the way to Pathaleon’s room. The adds are significantly slower than her at full run.

Interesting Places (and Other Crap) 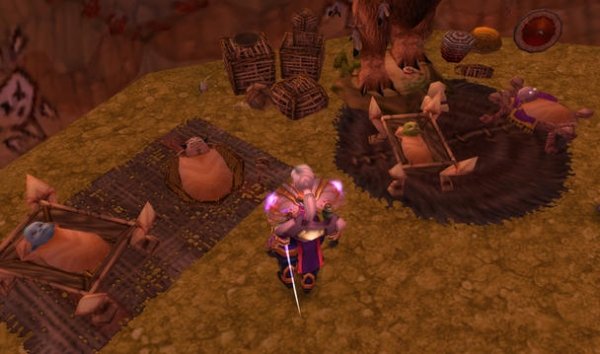 Not exactly a paladin or tanking related post, but I found this interesting: Someone on my realm forums started a, “cool places only accessible via flying mount” thread. I can’t believe that I’ve missed this one: Fly to 51,14 in Nagrand (the “G” in “Laughing Skull Ruins” for those who do not have a mod that gives out coordinates). Nestled in the hills is Challe’s Home for Little Tykes. Well, you have to see for yourself, just…lol. So we know that Humans, Orcs, Draenei, elves, Tauren, and Trolls have children, but what about the Dwarves and Gnomes? 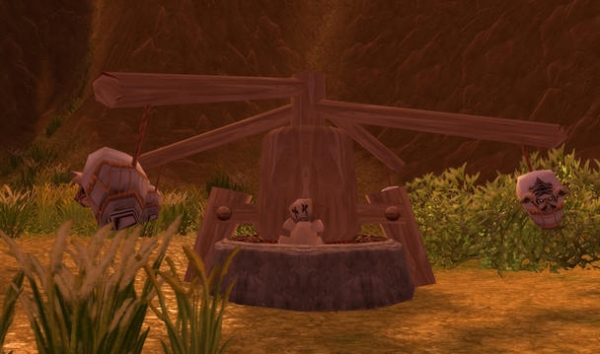 The instacast bug is being fixed in the next patch. Explanation: Whenever you do not have a sword or shield in your hands, you cannot parry or block. Unfortunately this rule applies to the short casting animation that occurs during consecration, cleanse, etc. So if you are getting crushed by normal attacks with 102.4% avoidance, this could be a reason why. Also, taunt will correctly work through crowd control. Can’t tell you how many times I have taunted a sheep, only to have it break free and gank a clothy while my spells were on cooldown

Rumor is that 2.1 will go live this week. But, hasn’t that been said every week for the past month?

Meh, been busy/lazy/website apathetic lately, thus the lack of postings.

What IS a Crushing Blow Exactly?

Okay, I think some people are confused about what exactly a crushing blow is and why it happens: A crushing blow is a hit that is 150% of normal damage and can only be dealt by mobs (not by players). It occurs whenever a mob has 15 or more points in Base Weapon Skill over a player’s Base Defense (in other words, a level 73 mob vs a level 70 player :P).

So if you have skilled your character’s Base Defense out to 350 (base means 350 WITHOUT any gear and WITHOUT any talent bonuses), only a mob with a Weapon Skill of 365 will be able to hit you with a Crushing Blow; in other words, a mob of level 73.

Also, remember that all possible attack outcomes on your character are mutually exclusive. In other words, a block is a block and a crit is a crit. You cannot block crits or dodge crushing blows….that is simply not the way hits are calculated.

I’ll make this addition to my existing guides later today or this week but: In order to become completely uncrushable you need to have a total of 102.4% avoidance/block(not just 100%). The reason for this is that for each level a mob has over you, 0.2% needs to be subtracted from each of your avoidance/block stats. Just think of it this way: Every point of defense that you have increases all of your avoidance/block stats…it’s something similar with mob hit rating (I don’t think that made much sense but meh, starving).

My paladin is currently at 500 defense and 102.5% mitigation/block. The trick is to time your Holy Shield so that it is *always up.* That means, taking the global cooldown into account. I got Crushed to death for 8k ~ 9kish the other week because I timed my spells poorly and had less than a half second where Holy Shield was down. Boo lol.

There are several article updates that I will make whenever I have time and interest to write stuff.

On a similar note, I worry about how effective my current spell damage will be in regards to threat generation as the DPS in the raid gears more. I say 200 to 250ish as a general guideline for Kharazan tanks, but I am wondering if I will need to up that number to around 300 in the future? (Either that or everyone else can not be aggro whores, but me generating more threat means everyone else being able to DPS more without pulling).

Also just as a general observation, it is much harder as a paladin to off-tank than it is to main tank because of the way Spiritual Attunement works. I suspect that warriors have a similar problem with rage (except for the fact my problem is with losing mana and theirs with gaining rage).

For example, I was the third Gruul tank on Saturday. Gruul uses an attack called Hurtful Strike on the next person on the threat list within melee range. The second tank is in charge of soaking those up, the third tank needs to build aggro along side just in case either tank dies. In order to stay above the rogues on threatmeter, I had to throw everything I had at Gruul…but since I wasn’t receiving a signficant amount of healing, I had to pot to keep my mana pool up. It wasn’t really that big of a deal I guess, but something to keep in mind? 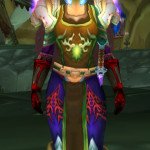 I got a new paladin toy last night: Justicar Shoulderguards off of High King Maulgar, just need to decide exactly how I am going to socket it. Lucikly, I got another crafting commission last night after the raid, otherwise I would have been too poor to afford two blue gems in addition KoT helm enchant (and healing gems/chant for the other shoulders).

I can’t seem to find official release notes or screenshots of paladin Tier 4 set changes on the 2.1 PTRs (browsing limited at work), but from what I read, the Justicar Shoulderguards will have 33 stamina and 12 intellect. I skimmed the post, but it looks like they removed the MP/5 and some of the int in favor of more useful stats.