Just cleared normal difficulty today on my monk, good times. Onwards to nightmare…or my demon hunter alt. This is the build that I ended up using after a bit of trial and error. Gearing up appears to be, at least to my understanding at this point, stacking as much Dexterity as possible with some Vitality. I did end up sacrificing a bit of DPS for the sake of 2.25 spirit gen, which worked out pretty well seeing as how quick I burn through spirit.

I didn’t notice any significant difference in spirit regen when using Crippling Wave over any of the other three primary abilities, none of which seemed to have nearly as much utility given that Crippling Wave applies an AoE frontal Debuff in addition to the AoE damage. I am pretty sure that this will change at some point as I unlock some of the other runes (like for example, Quickening at level 42 until that trick is eventually nerfed lol).

So usually, I begin most encounters by activating Sweeping Wind, moving in (with a Dashing Strike occasionally), and spamming Crippling Wave until I have enough spirit to do one or two Dashing Strikes (the Flying Side Kick rune has a 60% chance to stun; seems to work on bosses). If there is a large group of mobs, Cyclone will pull most of them onto me so that I can AoE them down with whatever. If I get low on health, I have Breath of Life as well as my potions. Otherwise, Transcendence actually keeps me adequately healed up most of the time (if I am low. have healing abilities on cooldown, and have spirit to burn, casting several low spirit spells restores a good chunk of health).

Dashing Strike is great for repositioning, since it always teleports you to the opposite side of your target. Also great for teleporting out of crap on the ground as well as avoiding attacks. Basically, spam Crippling Wave or whatever attack until I see the boss charge up (ie raising a sword up in the air is a good indication), then activate Dashing Strike to avoid the frontal cleave. I am unsure if I like Lashing Tail Kick. I have a sneaky feeling that as we progress upwards in difficulty (Nightmare, Hell), LTK and most likely Cyclone will be replaced in favor of more defensive abilities.

Normal difficulty wasn’t incredibly hard, though sadly most of my deaths seemed to be due to standing in things. After playing WoW effectively since launch, main tanking as well as leading raids for several years (not so much lately though), you would think that I would know better… 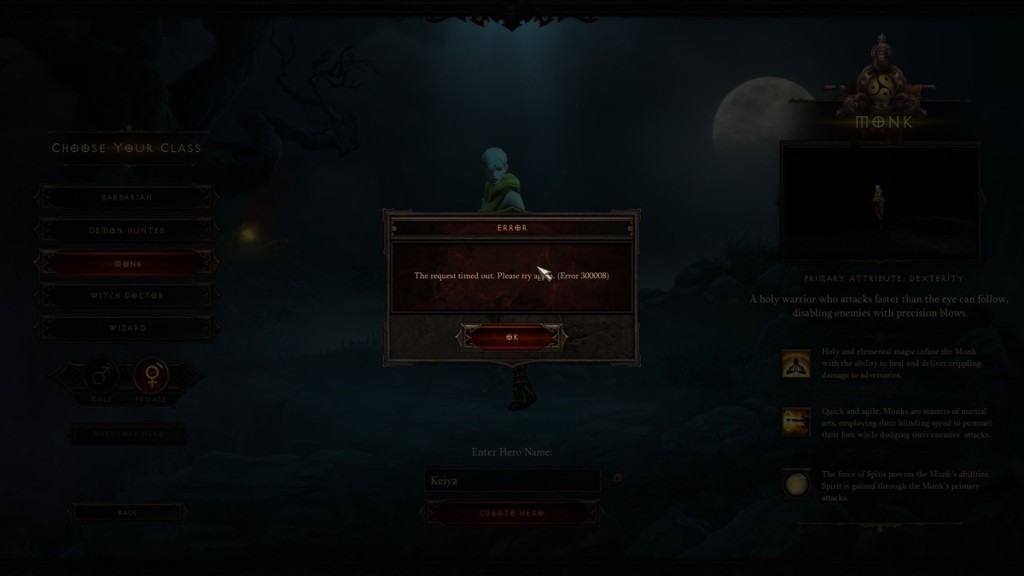 In summary, if you did not receive your copy of Diablo 3 until Tuesday afternoon or evening, you did not miss out on a whole lot, given how utterly slammed the servers were (general rule of thumb: don’t really ever expect to play online games of this popularity immediately after release).

I was actually able to login without any problems (seemed to get in before Error 37 was an issue), but got stuck on the character screen in and endless timeout loop. Apparently though, the characters were created, given that my account was full of level 1 monks when I had logged in briefly the next morning to check my account. I have heard that a few folks were able to not only login immediately, but also create characters and play with little to no delay. All of those people are bastards lol. There were a couple more major server outages (servers were down effectively all of Tuesday evening and then for about one hour Wednesday evening immediately after I had arrived home from work lol…). Otherwise, I have been able to play lately without any real connection issues. I have been enjoying playing my monk; Currently level 21 in act II.