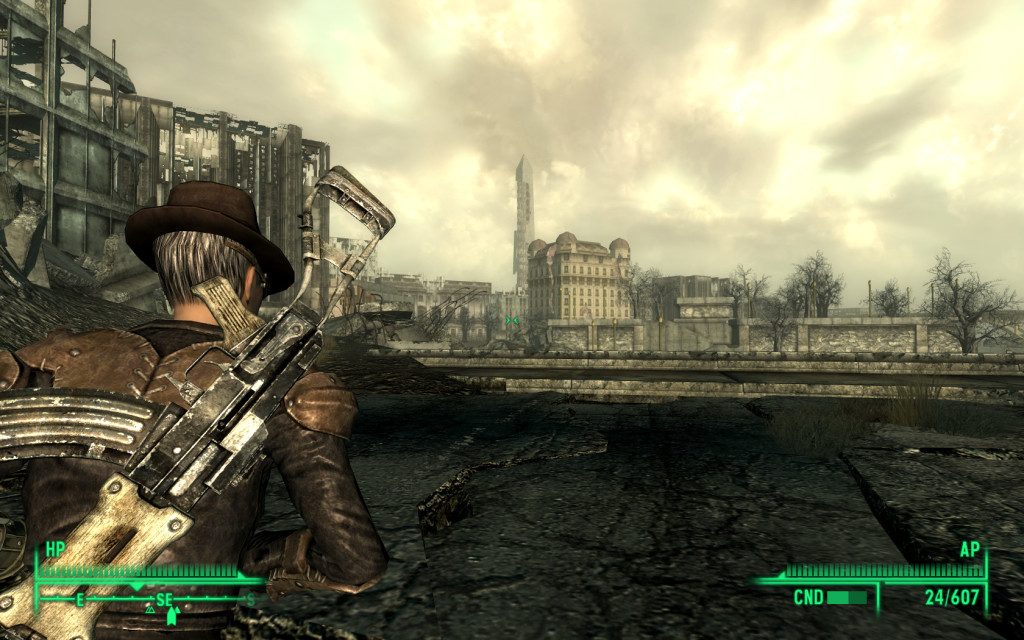 I better post this article before it loses complete relevance. I am just too busy playing Fallout 3 to tend to my website. This review turned into an Oblivion/Fallout 3 comparison at some point. Anyway, don’t get me wrong; I loved Oblivion, but it is far from a perfect or even near perfect game. It is also a natural comparison, being from the developer, being roughly similar and using the same graphical engine.

Fallout 3 uses a hybrid real time/turn based combat system called V.A.T.S.: V.A.T.S. pauses combat allowing you to queue up attacks to specific body parts. You have a certain amount of Action Points (AP) to use and different weapons/parts cost a different amount of AP per attack. When combat resumes, your actions are played out in a cinematic manner (slow motion head explosions!). Attacking different body parts also reaps different benefits. For example: Crippling a target’s leg will reduce movement speed and crippling their shooting arm will reduce accuracy.

Real time combat is fast and harsh. In fact, it feels similar to that of Oblivion’s, but with more ranged options added in. For example, it is very hard to shoot accurately from a distance in real time in comparison to your standard FPS. The bias is definitely towards V.A.T.S. combat, which is just fine with me because VATS is supremely fun. From skimming the previews, I had originally expected it to be mostly a novelty. There’s a lot more strategy to it than I had expected. 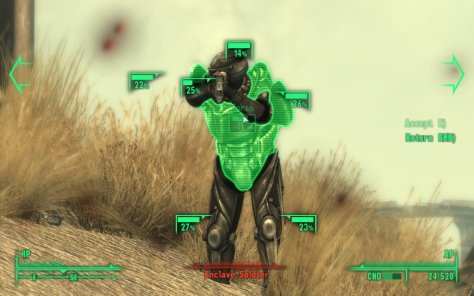 There is a stealth element to Fallout 3, but it really isn’t a stealth game. For example, I’m not sure there are too many (if any) combat based missions than can be completed on stealth alone. Similarly, though you can ignore V.A.T.S. and approach combat like a straight up shooter, I’m not sure I would recommend it.

Fallout 3 has a straight-up experience based levelling system. You obtain experience from tasks such as completing quests and killing things. When you get a certain amount of experience, you level up. Upon leveling, you are able to assign skill points into any of 13 skills (such as Speech, Melee, etc). Leveling also allows you to choose a “Perk.” Perks range from practical (boosting damage and stats) to purely for fun (Bloody Mess).

Even though Fallout 3 is running off of Oblivion’s somewhat dated graphical engine, it looks great. I love the atmosphere, the world detail and the scope of things, it really draws you in. Your first view of the wasteland as you first exit the vault is particularly impressive. The character animations and facial expressions though could have used some polish to say the least, they look awkward and wooden. 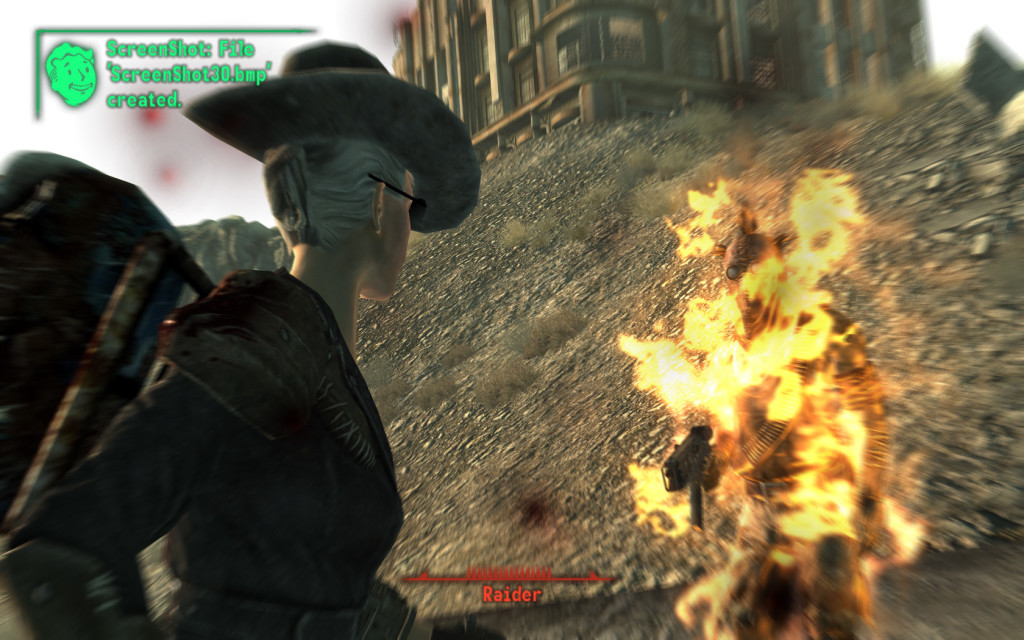 The world map feels more condensed in comparison to Oblivion’s. It’s quite a bit smaller, but there’s much more to do. As I play, I find myself doing a lot of walking and exploring because it doesn’t feel tedious; There aren’t ginormous stretches of nothingness. The game world is littered with the shells of old buildings, towns, old factories, ruined houses and what have you.

I don’t want to discuss the main plot too much because I don’t want to spoil it. But so far, I am really liking the story, it’s interesting and well paced. It’s also, at least so far, seems to be free of “Oblivion Gate” moments. There also aren’t as many quests as Oblivion, but each one is quite a bit longer.

Overall, it seems that Bethesda does know how to listen. Many of the gaping problems present in Oblivion were fixed in Fallout 3: They dumped the dumb skill/leveling system, made the world map not boring, and hired more than 3 voice actors. It still though could have used more polish, the engine quirks are still present (glitchy physics, awkward animations, pop-in).

TL;DR: It’s fun, buy it as long as you have time to suck away entire evenings at the computer.