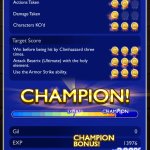 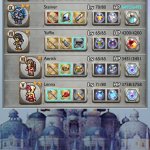 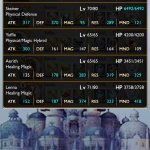 God. What a pain in the ass. I have a fairly okay set of gear and set of Soul Breaks (minus 2/3 of the holy trinity. No natural hastega or wall) and this one was barely doable. I am not even sure if this one is doable without at least a natural medica and possibly AoE regen without a thousand S/Ls. Beatrix is guaranteed to cast at least two Climhazzards at scripted points during the fight. The trick is to watch her health bar. When the bar touches her toes she will cast it. Climhazzard is NAT damage that cannot be avoided or mitigated.

She is also guaranteed to cast Stock Break several turns after Climhazzard which will do AoE physical damage as well as sap all characters. Sap needs to be removed ASAP before the second Climhazzard goes off otherwise instadeath will occur at the first damage tick. Stock Break is straight up physical damage so normal avoidance tactics apply (retaliate, etc). After numerous party configurations this is the team that I went with:

Overall, the trick was to remove the RNG deaths from Holy and Shock during the later half of the fight. Holy isn’t used very often but can dealt with by keeping reflect dispelled (luckily it’s not refreshed often, assuming it’s scripted in at a certain turn). Shock is cast on the character with the highest HP. As long as Steiner was topped off, it wasn’t a big deal. Tried the Retaliate cheese strategy but it was too RNG dependent (unlucky Holy and Shock hits…) and irritating to time.